Music on Broadway in fourth week 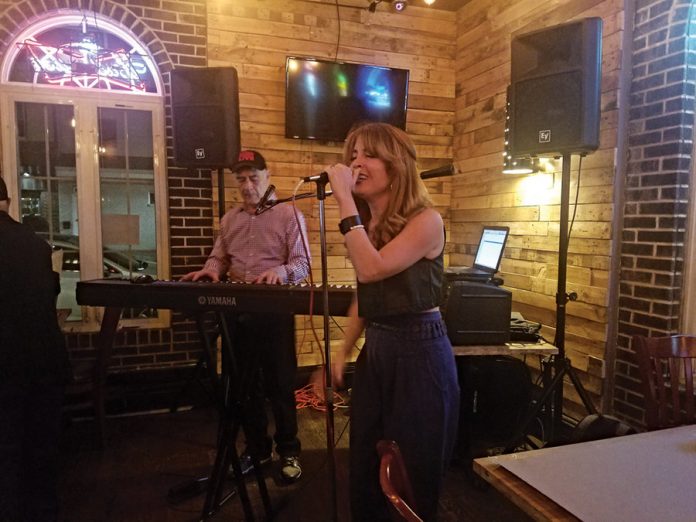 The Music on Broadway series, hosted jointly by the Bayonne Urban Enterprise Zone (UEZ) and partnering businesses in the zone (which encompasses all of Broadway) is in its fourth week.
The concept started as a monthly music show at the Bayonne Community Museum, according to Dee Dee Botino of the UEZ. “The whole idea sprang up to get people out on Broadway,” she said. “Music at the museum was a hit but only once a month, and we wanted to do something for the merchants.” Now, the UEZ has expanded to weekly shows with 20 participating musicians and 18 venues, although not all participate on a weekly basis.
“We know we have a lot of talented musicians from Bayonne,” said Terry Young, the series organizer. “But you can’t fit an entire band in some of these small places. If you have room for a chair, you have room for a guy with an acoustic guitar. It gives the venue a music atmosphere and ambiance.”
Friday, December 9 was the third Friday of Music On Broadway. At Buttero, an American-style restaurant and bar, Piano Bill and Jennie, composed of Bill Christopher and Jennie Riccio, were performing for the first time together. Bill was Jennie’s vocal coach before accompanying her on piano. “After having more lessons with him, we came to the idea that we can perform together,” said Riccio, who was admittedly excited to perform for the first time with her teacher. “Jennie was taking lessons for four weeks in a row when I told her she should sing country music,” said Christopher, introducing Riccio. The duo performed “Nothing Compares to You” by Prince, some Christmas songs, a song by Alanis Morissette, and one of Riccio’s favorites, Dolly Parton’s “Jolene.”
Francis Szklarski, who has owned Buttero for 17 years, said he expects Music on Broadway to be a boon for businesses in Bayonne. “To have all these venues together and musicians, it will attract people from out of town,” he said. “A lot of our businesses in town depend on local clientele, so if we can develop a program like that to attract outsiders into our town, it will increase business.”

An experiment and learning process

The series is running weekly, but that will probably not continue indefinitely. Botino said that other than entertaining residents and giving local businesses a boost, the UEZ is trying to push local businesses to experiment with their own ways to get more people out on Broadway.
“It teaches them little things that could increase the business,” said Botino. “Especially with the holidays.”
The UEZ has not decided when or if the series will end. It’s in its fourth week, and measuring success takes time. “It’s still early, and we’re still learning,” said Botino. “If a business is requesting musicians again, then we must be doing well.”

“A lot of our businesses in town depend on local clientele, so if we can develop a program like that to attract outsiders into our town, it will increase business.” – Francis Szklarski
____________

At The Rock, a pub in Bergen Point known for its games, burgers, wings, and beer, southern-Florida born Orville Davis performed. “This is a song I’ve been drinking to for many years,” Davis said in his southern drawl before twanging the intro to Willie Nelson’s “On the Road Again.”
When Davis came to perform, Stefanie Tych, co-owner of The Rock, posted on social media, “There’s a real live cowboy at the bar.” Davis is, in fact, a cowboy who works with horses at stables, giving riding lessons and trail rides, while gigging around the New York area. His story appeared in a 2011 New York Times feature titled “Horses, Music and a Happy Cowboy.”
“I think his songs are so good,” said Tych, listening to one Davis dedicated to her. “And I’m not even a country music fan.”
The UEZ splits the cost of the musicians with the merchants, which Tych said enables her to have musicians in her bar. “We almost never have music in here,” said Tych. “I thought it would be perfect to give our customers something different. People need to give Music on Broadway a chance.”
At the Bridge Art Gallery across the street from The Rock, Bayonne resident Anton Kosachev was playing jazz guitar, accompanied by Anthony Bianco on upright bass. “The gig found me,” said Bianco, who teamed up with Kosachev through mutual friends.
“We have chemistry and can take some chances,” said Kosachev. “We communicate, and most importantly, it’s fun.” The duo played straight-ahead jazz by artists such as Wes Montgomery and Luiz Bonfa, while guests viewed artwork.
Cheryl Mack, who runs the gallery with her husband, Christopher, said she is a big fan of the UEZ’s efforts thus far. “It’s a really wonderful program,” she said. “It makes live music accessible, so people don’t have to leave Bayonne to find it.”
Next week, MezCal Kitchen at 482 Broadway will host a three-piece salsa band, and Dave Watson, a pro who plays sax and flute, will perform at The Big Apple at 412-414 Broadway.