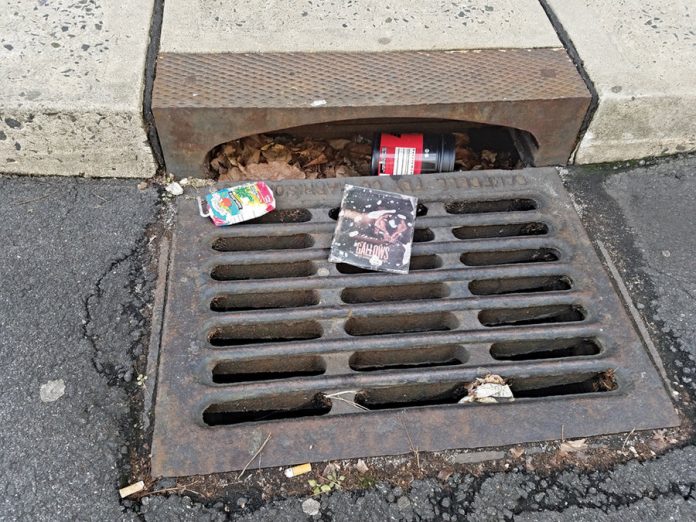 An ongoing drought in the area is worsening the unpleasant odor that’s permeating the city.
“More than anything else, we’re having problems with stink because we’re in a drought,” said Tim Boyle, director of the Bayonne Municipal Utilities Authority (MUA). “Rain helps the system move along, but we have not been getting those rains on a regular basis. “
Sewage systems and the problems that accompany outdated infrastructure are myriad and ongoing, especially in older cities like Bayonne. The latest burden on the old sewers is one of society’s most challenging—climate and human behavior.
The drought is temporary. A troubling circumstance that’s more permanent is the amount of trash coming out of the sewers. By measuring litter using netting chambers designed to keep litter out of the system, Boyle found that litter in sewers doubled in the last five years. He recommends that the city provide more trashcans to help alleviate the problem.
Another gripe is with residents flushing “wipes” that were previously marketed as “flushable,” but are now labeled “biodegradable.”
“People who have been using regular toilet paper for an entire lifetime suddenly feel they need these wipes,” said Boyle, who blames the companies who make the wipes and ran multimillion-dollar advertising campaigns marketing them as flushable. “These bad things that are taught are difficult to un-teach,” he said.
Boyle said that five kinds of wipes have been showing up in the sewage system on a regular basis, and they usually come from homeowners. Boyle said that in order to clear the pipes, workers run a highly-pressurized line with five highly pressurized jets spraying in one direction. The pressure can break the pipe, which is very expensive to fix. “It’s a multifaceted issue that leads to a weaker and less effective sewage system,” said Boyle.

“It’s a difficult thing to police. Nobody is throwing their poo bag into a sewer right in front of a police officer. It’s just human nature, I guess.” – Tim Boyle
____________

Mind in the gutter

One of the more disgusting problems affecting the sewers is pressurized plastic bags of dog poo. Those who do the right thing by curbing their dog should throw their hot mushy bags in the garbage, but too frequently they throw those bags in the sewer. “Then you have a lump of poo that is hardened to concrete slab,” said Boyle. “It’s a difficult to thing to police. Nobody is throwing their poo bag into a sewer right in front of a police officer. It’s just human nature, I guess.”
It’s not just one bag thrown in a sewer or one neighbor flushing some wipes; it’s all those behaviors that add up, not only in Bayonne, but across the country, creating a multibillion-dollar problem.
The MUA director proposes a campaign to educate the public on an issue that is out of sight and out of mind. “We want to re-institute an anti-littering campaign,” said Boyle. “If our sewers were less encumbered with trash instead of doubling every five years, we would be much better off.”
Combined sewers, like those in Bayonne, are designed to collect both sewage and surface runoff, such as rainwater. In overflow situations, sewage and surface runoff combine to discharge untreated sewage into the Newark Bay, which includes petrol chemicals and ecoli bacteria, both environmental hazards. Boyle said that a two-inch rainstorm in Bayonne can overwhelm the system to the point of discharge.
“Combined sewer overflows are not caused by what we flush,” said Dan Van Abs, a research professor at the Rutgers School of Environmental and Biological Science. “They are caused by the fact that storm water flows into these sewers and overloads them.” His solution is to install green infrastructure that separates sanitary sewerage from runoff.
But ripping out the sewers and installing a modern sewage system is costly.Van Abs said towns such as Camden have successfully implemented green technology. In these storage systems, tanks or tunnels collect sewage to prevent it from getting into public water systems.
According to Boyle, a campaign to raise awareness about this expensive problem festering unseen under our homes and roads can’t come too soon.