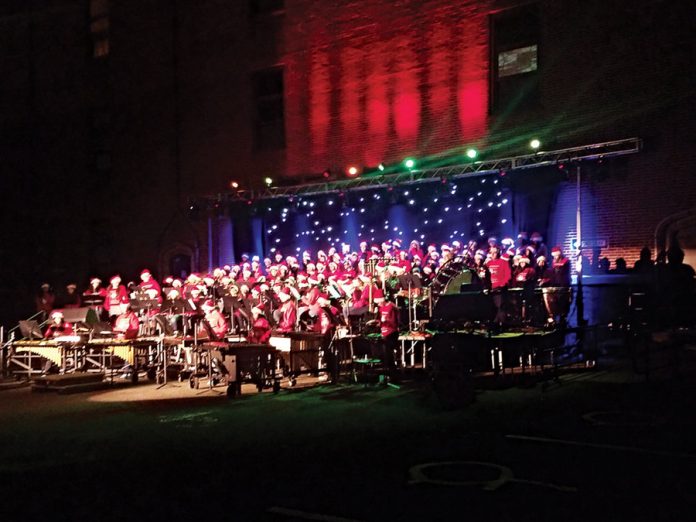 Bayonne High School hosted its first annual Winter Spectacular on the evening of Thursday, December 8. The festival showcased more than 150 students from combined high school and middle school bands, including the high school choir, the jazz ensemble, middle school combined choirs, and a guitar ensemble. Musicians performed Christmas music on a stage outside the tennis courts with colors and images projected onto the school behind.
Weather in the 30s had the school opening a hot chocolate stand and selling blankets, along with other apparel. Despite the frigid weather, relatives came out in support of their young musicians.
Grace Erickson was waiting in line for the show. Hergranddaughter, Mackenzie S., is a baritone sax player in the high school jazz ensemble. “The kids do so good, and we want to support them. They work hard,” said Erickson. “It’s going to be enjoyable, especially with all those lights,” noting the multicolored images projected ontothe school’s brick wall behind the stage.
Tanya Munyan was there to see her son, Joaquin, play the trombone in the jazz ensemble. “The weather is a little cold, but he wears shorts to school,” said Munyan. “So it’s probably just fine for him.”
White chairs were neatly lined up in front of the stage, but everyone was standing, snapping photographs, and singing along. Emily Weeks, a senior at BHS, was walking around the crowd with an iPad controlling the sound remotely.
“It’s more difficult than doing anything we do inside because the sound kind of goes all over the place,” said Weeks. “So it’s much more difficult to control.”
When the performance concluded, a yellow school bus pulled up in front of the stage with Santa and his elves, who lead the crowd to the ice rink, where they rented skates.

Santa at the ice rink

Santa and his elves posed for photos with kids, as a guitar ensemble played,and skaters trickled into the Richard Korpi Ice Rink.
Lenny Lopez, who was at the show with his family, admits he can’t skate, but his two daughters in third and seventh grade, can. “It’s amazing how they do that,” said Lopez from the sidelines. He graduated from BHS in 1987 and said he takes advantage of community events like this one. “Bayonne is an old town, but a good town,” he said.“There’s more going on here. There’s a lot of activities so that’s why we’re out here.”
Balancing on rented skates, BHS freshman and drummer in the jazz ensemble, Oscar Javier said, “I’m not bad at skating, but I’m not that good at it. I have good control of going straight, and a little bit of turn but not as good as the hockey players.” Javier is careful since he lacerated his finger falling on ice skates weeks earlier.
Javier said the show went well, aside from the weather, which forced him to wear gloves, which he wanted to avoid while holding drumsticks. “It was just cold,” he said. “I know it affected me.”