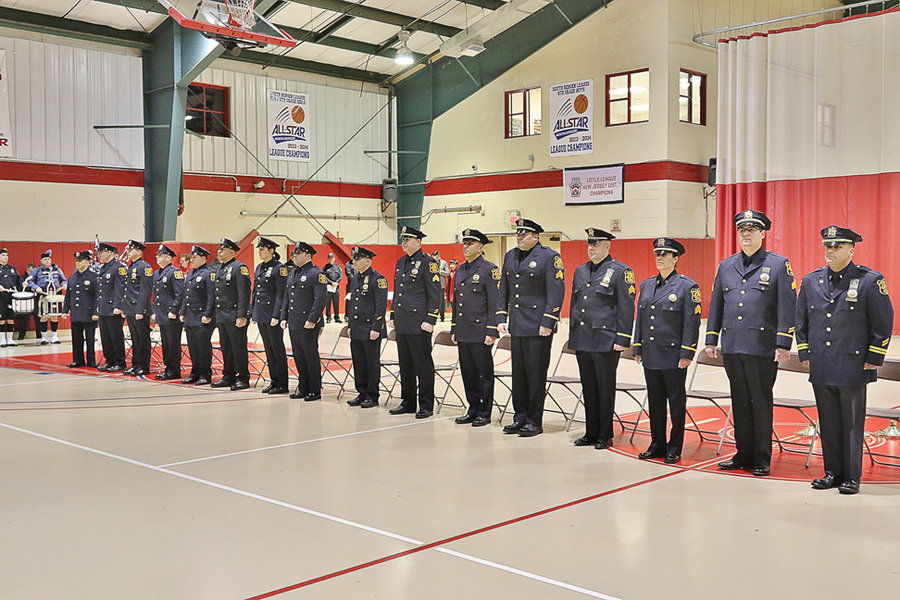 The North Bergen Police Department promoted 16 members Monday, Dec. 12 in a ceremony with family, friends, law enforcement colleagues, and more. The promotion is the largest in the department’s history and will allow it to refill its table of organization, replace several retired supervisors, and ensure continued excellence in keeping North Bergen safe. The event was held in the North Bergen Recreation Center.

“North Bergen has always been strongly committed to public safety because it is in the best interests of our residents, businesses, children and everyone who makes up this community,” said Mayor Nicholas Sacco. “I congratulate the fine men and women promoted today and look forward to seeing them continue working hard to lead our police department forward.”

“Maintaining an adequate supervisory staff is vital for our police department to continue providing the outstanding level of service our residents deserve, especially with the many young officers we have hired in recent years,” said Commissioner Allen Pascual.

“I could not be more proud of my colleagues who are being promoted today, or of the outstanding work this department has done in 2016,” said Chief Dowd, who was recently sworn-in as the president of the Hudson County Association of Chiefs of Police.

The North Bergen Police Department is hosting four informal N.B. TAPS meetings throughout the township in December. North Bergen residents are encouraged to come voice their concerns and discuss issues in person with members of the police department.

The last meeting this month takes place from 7 to 8 p.m Thursday, Dec. 22 at Our Lady of Fatima Church, Lower Level, 8101 Kennedy Blvd.

N.B. TAPS (North Bergen Township Alternative Policing Strategy) was initiated earlier this year by Chief of Police Robert Dowd in order to enhance police-community relations. Residents get to meet the officers who patrol their neighborhoods, and the officers learn about any matters of concern directly from the residents.

The Bergen County Audubon Society leads a walk looking for wintering birds and raptors at DeKorte Park in Lyndhurst on Tuesday, Dec. 20 at 10 a.m. The park is located at 1 DeKorte Park, Kearny. For more information call (201) 230-4983 or email greatauk4@gmail.com.

The developer for the massive American Dream retail/entertainment complex on Route 3, Triple Five Worldwide, released a video last week of a new design plan. To replace the different colors of the exterior, the new design concept is to include a glass and silver exterior.

The building project is scheduled to be completed in fall 2018, according to Tripe Five Worldwide.

American Dream has recruited other businesses and entertainment options such as Lego Land, an aquarium, and a 4D dine-in movie theater.

Watch the video for the new design concept at https://www.youtube.com/watch?v=CVwxucZzl_M&feature=youtu.be

First arriving units found part of a car engulfed in flames and an injured man lying on the grass median that separates RT-3 West and the RT-3 West Service Road.

Sheriff’s Crash Investigators have determined that the driver lost control of his vehicle at the RT-1&9/RT-3 merge. According to the report, the car jumped a curb to the grass median that separates RT-3 East and West, crashed into two telephone poles, knocking one down, and then the car disintegrated.

The driver was ejected from the wreck of the car, rolled across RT-3, and eventually ended up on the median, the report states.

What remained of the car burst into flames and came to rest near the Paterson Plank Road overpass on RT-3 West, the report states. The driver was transported by EMS to Hackensack University Trauma Center with serious injuries.

Hudson County Crash Investigators believe that high speed was a factor in the crash.

The section of RT-3 West was closed for four hours while crash investigators worked the scene. Investigators have not yet determined if any other vehicles were involved in the crash.

No charges have been filed at this time and crash remains under investigation.

If anyone witnessed this crash, please contact the Hudson County Sheriff’s Office Crash Investigation Unit at (201) 915-1300.