We’ll be watching you 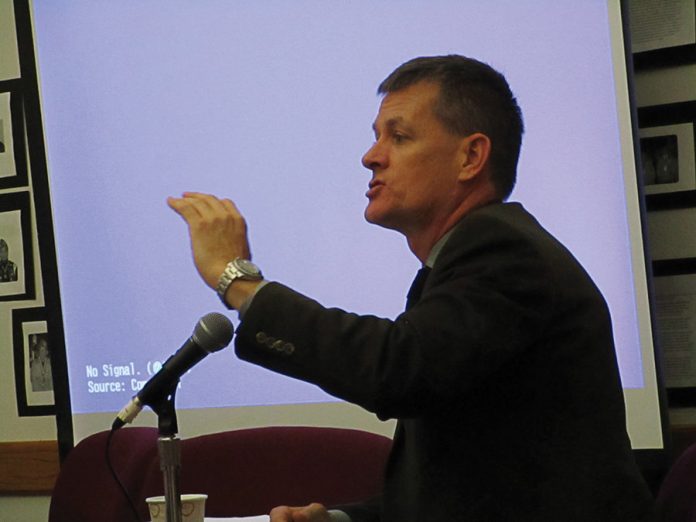 A three-phase, multi-year program will entirely revamp the city’s public safety camera system, according to Public Safety Director James Shea, who is seeking approval from the City Council for three funding resolutions.
Shea said the existing technology is not only out of date, but also poorly positioned to serve as a crime-fighting tool. The system was largely installed as funding became available, and often placed in locations dictated by grants, rather than where the surveillance was most needed.
“Many of these are pointed in the wrong direction,” he said. _______
“The new cameras will be actives 24 hours a day seven days a week.” – James Shea
____________
A lot of the existing cameras have low resolution compared to the new technology that will allow law enforcement officials to better recognize suspects or determine details of a crime.
“The new cameras will also be installed where they are needed most,” he said, “starting with high crime areas.”
Phase I will install 62 cameras in the south and west districts of Jersey City, considered high crime areas.
When all three phases are completed, the city will have more than 200 cameras strategically located throughout the city.
The first phase, which will cost about $600,000, will be paid for out of a combination of Departmet of Homeland Security Urban Areas Security Initiative (UASI) funds and capital budget funds.
“We made a commitment to replace our city’s aging and inefficient CCTV camera system with one that will provide optimum coverage in key areas and we are doing that,” said Mayor Steven Fulop. “The system in place was outdated and left to deteriorate and quite simply was failing. This is another tool that will increase public safety, prevent crime, and help our officers as they work to solve cases.”

New system will be better located

The existing 150 cameras were installed in phases between eight and 15 years ago using Urban Enterprise Zone funds, which meant they were placed in business districts throughout the city – not the most effective locations.
The locations for the new cameras will be based on crime data showing areas of historically higher crime or on feedback from the community, and in municipal parks. Additionally, the old cameras hadn’t been serviced in several years once the state withdrew UEZ revenue from municipalities, which meant that at times a third or more were out of service.
Shea, however, said some of the old cameras will be maintained for use in public parks.
There was also a cost associated with software programs for the old system, which will not be a problem with the new system, Shea said.
Another feature of the new camera system that sets it apart from its predecessor is that all of the cameras are 5 megapixel cameras to provide higher clarity, whereas previously they were 1 megapixel at best. The majority of camera locations will have four fixed cameras covering a 360-degree field of vision, thereby removing user error as a camera will never be facing the wrong way and removing the ability for criminals to move out of view.
“The new cameras will be actives 24 hours a day seven days a week,” Shea said.
The state-approved vendor, Millennium Communications, could complete Phase I within a few months weather permitting. Phase II is anticipated to be completed in approximately a year and will bring the total of new cameras in the South and West districts to 183. Phase III will cover the North and the East districts and is currently in the design phase.
In addition to the 62 cameras, this phase also includes the installation of the currently most advanced fiber optic cable along the length of Ocean Avenue, MLK Drive and Bergen Avenue, in addition to portions of Garfield Avenue. This will allow for the connection of the side streets into the CCTV camera system and easier expansion for the future phases.
Bringing power to the cameras – which was a concern in the past – will be accomplished by installing them near existing traffic lights.
Shea also noted that this will coincide with the recently established list of private camera systems – a voluntary program that allows police to access cameras from private residences, stores and other locations to help in an investigation.
The city has already indicated the locations, mostly at intersections, where the cameras will be located. Phase one will install 36 cameras at nine locations along Martin Luther King Drive, Ocean Avenue and other areas. There will be 26 cameras in these parks: Ferris (Triangle) Park, Stevens Park, Muhammad Ali Park, Audubon Park, Arlington Park and Columbia Park.
Shea said cameras are being installed in locations high enough above street level to avoid vandalism. City officials, however, said vandalism had not been an issue in the past.
Al Sullivan may be reached at asullivan@hudsonreporter.com.

From Mexico to Newark Avenue