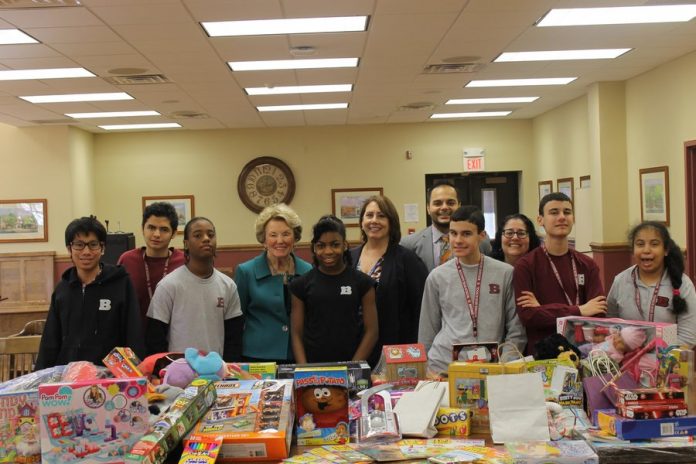 A white powder found at John M. Bailey Community School on Tuesday, December 20, that caused an emergency response turned out to be cornmeal, according to school officials. Early that afternoon, kids found a balloon with powder inside in the schoolyard. When the balloon popped and sprayed powder on the kids, a parent noticed and notified school officials, who called the authorities.
According to school officials, multiple police and fire personnel responded to the call, and one student was taken by ambulance to Bayonne Medical Center where medical personnel determined the powder was not dangerous, and the students was promptly returned to school.

Amalgamated Transit Union (ATU) held a toy drive and raised funds for Bayonne’s Highway’s and Windmill Alliance on Thursday, December 15.
The union has made this an annual campaign recognizing the late Cookie Daughtrey through her daughter Erica Daughtrey, who has established a close working relationship with the ATU.
ATU State Chairman Ray Greaves, a Bayonne resident said, “Reverend Perez and the many volunteers at Windmill do a remarkable job of helping others, and the ATU is proud to be able to support their cause and efforts.”

Corrections officers give away toys

Special needs students at Washington School were in for a treat on Thursday, December 22, when a group of Hudson County corrections officers came to give them toys for Christmas. Corrado DeVincenzo, a corrections officer at the Hudson County Correctional Facility in Kearny, said, “We work in the jail cell, so we’re not as visible to the community. We’re trying to do more to get involved, get out there, and show what we can do.”

The welfare of children