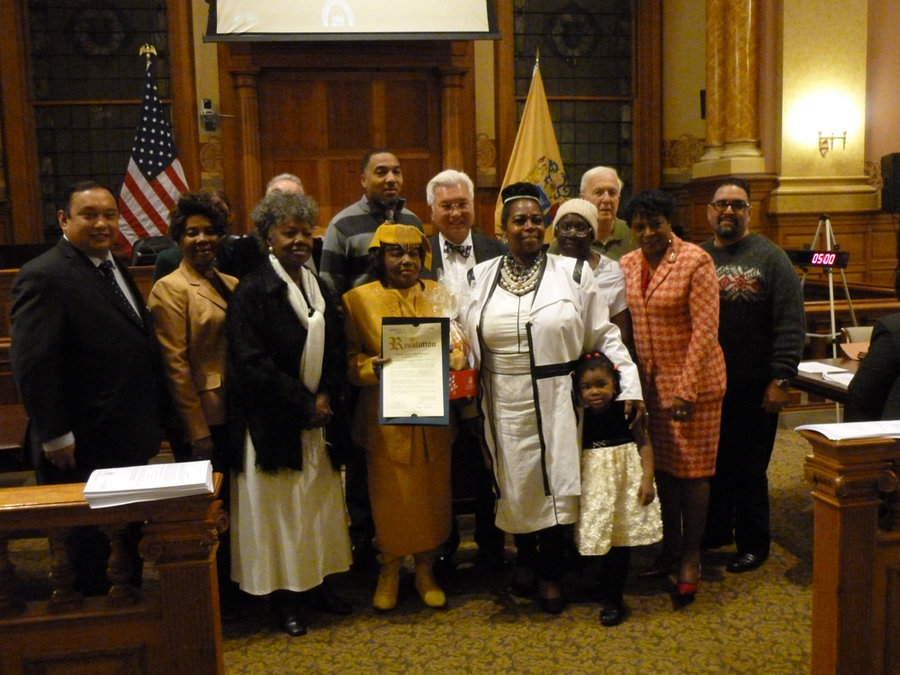 Figuring it’s never too late to say thank you, officials from Jersey City and Hudson County celebrated the 80th birthday in December of Dorothy Bellinger, an African-American police officer who served on the west side of Jersey City for more than 37 years before she retired in 2000.
Bellinger, (better known as “Ms. Dot”), joined the Jersey City Police Department in 1963 in the 4th Precinct. At the same time, she served as a volunteer with the Probation Office Juvenile Division.
In two separate resolutions passed in December, the City Council and the Hudson County Board of Freeholders paid tribute to a woman who career served as a model for what is considered the most ethnically-diverse city in the state and whose service as an African American came during the height of the turbulent civil rights movement of the 1960s.
During her working career, Bellinger also developed several private sector businesses, such as a cleaning service, property management company, catering company, child care service, a hair styling salon, and other businesses.
“Dorothy Rebecca Allen Bellinger … is a phenomenal woman in every sense of the word, a woman of faith, generosity, service, conviction, courage, care, charisma, fashion, compassion, advisor, herbalist, healer and an advocate for children,” said the freeholder resolution. “Dorothy is the proud daughter of Ousy and Katie Benjamin Allen (deceased), fourth generation immigrant from the West Indies. She is a native of Chill Town, born and raised in Jersey City, New Jersey, the middle child of six siblings.“

After retiring from the police department, she became an employee of B. Altman and Company’s flagship store on Fifth Avenue in Manhattan. She also worked as a hair stylist for the family owned business, Jackson Funeral Residence, currently located at 384 Communipaw Avenue.
Known as a Lafayette section legend, she served as Lafayette Ward F committee person, and was the 2016 Grand Marshal of the Jersey City West Indiana Caribbean American Carnival Parade. She is descended from West Indies immigrants.
Born on Dec. 1936, Bellinger spent her young life in the last days of the Great Depression only to see the world plunged into a global conflict. She was born in Jersey City, and attended PS No. 14 and 22, and Lincoln High School, before going on to graduate the Jersey City Police academy.
She joined the police department at one of the most troubled times in American history, seeing the rise of the powerful civil rights movement, riots in cities throughout the north, and eventually the plague of violence and drug use in the cities.
As a lifelong resident of Ward F and the west side of the city, she said she is very concerned about the violence in the city.
“There are a lot of things that pass through the area, a lot of guns, and people being shot,” she said.
Since age five, she has been a regular member of the Monumental Baptist Church in Jersey City where she served as church clerk, charter member of the Chapel Choir Ministry, a member of the Usher Greeter ministry, and president of the Culinary Ministry. She is currently a church mother.
Her friends and family say that she always encouraged individuals to be all that they could, to be their best and to do the right thing.
_____________
“I never thought I would live to see 80.” – Dorothy Bellinger
____________
“She would always help somebody, feed, and clothe them,” her family wrote in a brief biography about her. “Dorothy loves the holiday as an opportunity to host family gatherings, cook, sing, dance, shop and do creative innovative things.”
She has four children, two grandchildren, and two great grandchildren.
Bellinger appeared before the City Council to say she was very proud to be honored.
“I never thought I would live to see 80,” she said.
Al Sullivan may be reached at asullivan@hudsonreporter.com.

The man behind the bow tie