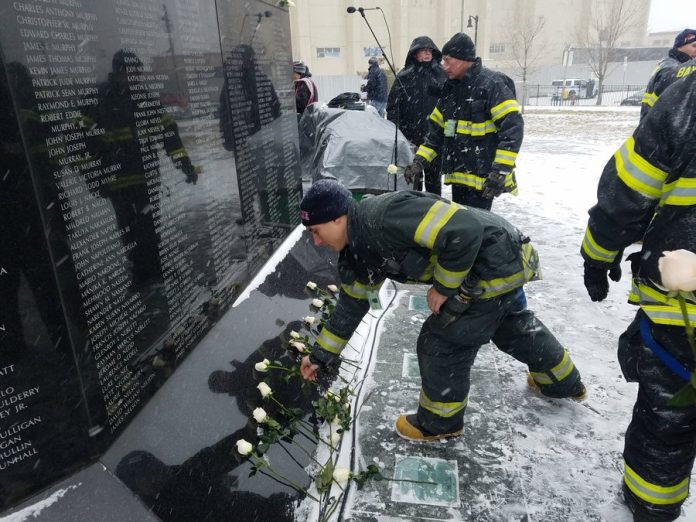 The Schiller Institute NYC Chorus performed a memorial service on January 7, a snowy Saturday morning, at the Teardrop Memorial to commemorate the 92 lives lost in a Christmas Day plane crash carrying the entire Alexandrov Ensemble, a world-renowned Russian choir.They were traveling to a performance in Syria along with journalists and doctors who were bringing medical aid and food to Syria. The gesture is symbolic because Russia gave the Teardrop Memorial to the United States in 2005 to commemorate lives lost on 9/11. Then, on the 10th anniversary of the attacks, the Alexandrov Ensemble performed in Quebec City with the NYPD Ceremonial Unit Color Guard, singing “God Bless America.”
A Russian United Nations representative, members of the NYPD color guard, the Bayonne Fire Department, and the veterans’ color guards, were present for the ceremony. On what was Christmas Day in Russia, the chorus presented a wreath and sang the Star Spangled Banner and the Russian National Anthem.
Peter Iliichev, Deputy Permanent Representative of the Russian Federation to the United Nations, was also on hand. He said the symbolism of performing on Christmas at the memorial donated by Russia is important.
“It is helpful when you’re grieving,and you’re not alone, and you’re friends are around to be there for their compassion, singing, and heartwarming solidarity,” Iliichev said. “They say when words fail, music speaks. Arts and culture are meant to bring peace to people.”
Captain Don Haiber of the Bayonne Fire Department said, “We offer our deepest condolences to the people of Russia and the families affected by this terrible tragedy. The loss of the members of the Alexandrov Ensemble, a gem of Russian culture…will be felt worldwide.”
Lieutenant Tony Giorgio, Commanding Officer of the NYPD Ceremonial Unit, performed alongside the Alexandrov Ensemble with the NYPD choir in Quebec City in 2011. “It was a wonderful performance that night, but as Mr. Iliichev said, words sometimes fail, but the music never fails,” Giorgio said. “Even though we spoke two different languages, we spoke the universal language of music, which always gives us hope, comfort, and peace. That’s all we want in this world.”
Terry Strada, Chairwoman of the 9/11 Families United for Justice Against Terror, lost her husband on 9/11. At the ceremony, she spoke about the international unity most acutely felt after tragedies.
“Tragedies like this can bring a nation together. Today, it is bringing two nations together. I hope you find comfort in knowing that we feel your pain and mourn your loss, too,” she said. “Russia wanted us, the American people, to have a memorial for the fallen heroes and the citizens lost and killed on 9/11 with a teardrop representing that the world cried with us. Thank you for your kindness and support. Today, we offer you the same.”
Founder of the chorus, Diane Sare, used the idea of a chorus to deliver a message of unity. “If we can each think of ourselves as unique voices in a great chorus that spans across generations and continents, then the universe will resound with the beauty of mankind,” she said. “This small token of our sympathy hopefully will bring a touch of hope and light back to the Russian people.”
On December 30, the Schiller Institute NYC Chorus performed outside the Russian consulate, presenting a wreath and a performance of the Russian National Anthem. Since the performance was shared online, an “enormous” and “positive” response from Russians and Americans alike prompted the Schiller Institute to plan a bigger, more symbolic gesture by performing the ceremony at the Teardrop Memorial.
“More than 400,000 people downloaded this within 24 hours,” said Suzanna Klebe of the Schiller Institute, noting the gesture heartened Russians who welcomed a break from political tension between the two countries. “They’re normal people who are grateful for a gesture from Americans.”