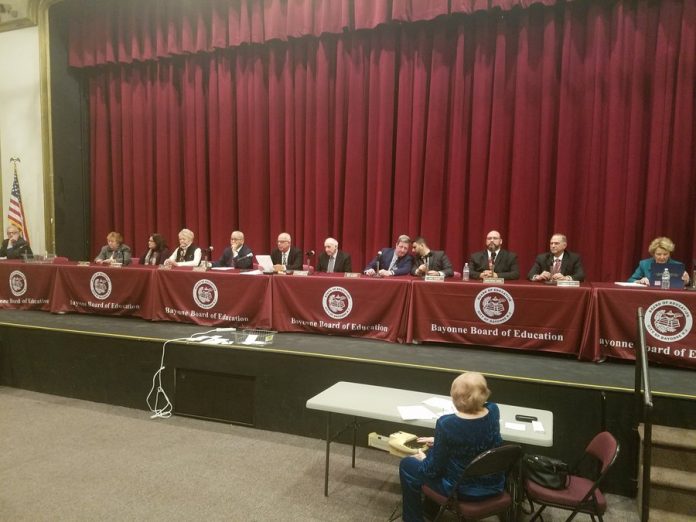 The Bayonne Board of Education’s first order of business for the new year was to reach a two-year tentative teachers’ contract with their union, the Bayonne Teachers’ Association (BTA). That agreement was reached at a board meeting on Thursday, January 5.
However, since the new contract expires in June, the BTA and BOE have only a five-month break from the negotiating table.
But Board President Joseph Broderick was encouraged that a contract was finally hammered out. “The teachers certainly deserve a contract. They work hard, and we’re sorry it took this long to get to this point,” Broderick said, acknowledging the financial challenges of a budget deficit. “It’s difficult, and we’re going to keep working through it to get a solution best for both sides. As long as the students get a great education, that’s what matters.”
The BTA is set to meet this week to discuss and vote on the contract. Broderick said the board is changing the next public workshop on January 19 to a meeting to address the contract. “Hopefully we can vote on [the contract] at the meeting,” he said.
Teachers in the Bayonne School District have been without a contract for 18 months, so the two-year deal would retroactively apply to the 2015-2016 school year and the 2016-2017 school year. The contract includes a 2.62 percent raise in funds allocated for teacher salaries in the first year, and 3.35 percent in the second.

“The teachers certainly deserve a contract. They work hard, and we’re sorry it took this long to get to this point.” – Joseph Broderick
____________

A break in the negotiation

A tentative four-year deal was struck in November, only a couple of weeks before news broke of a $2 million deficit in the BOE budget. The deficit stymied discussions as the board scrambled to re-assess the district’s finances.
That deal had the same first-year increase at 2.62 percent, so teachers have not lost any ground on the 2015-2016 school year. They can expect checks for retroactive raises for the year they already worked, which will be much appreciated by teachers who were hoping for a contract settlement before Christmas.
The second year of the previous four-year tentative deal was 3.8 percent, 0.18 percent points higher than what has been tentatively agreed upon for the new two-year deal.The last tentative deal was based on the assumption that teachers would agree to switch to a new healthcare plan, NJ Direct 15, which would have saved the district money and in return, would have increased teacher pay slightly. But the BTA thought the pricier NJ Direct 15 plan was not worth the 0.18 percent bump in salary, so they opted out.
At a board meeting on December 19, BOE attorney Bob Clark said a four-year deal was out of the question for now. “We informed the BTA that the board was committed to the first two years,” Clark said. “And the third and fourth years we cannot commit to, and we did not think we will be able to commit until we get the state figures in February of 2017.”
BTA President Alan D’Angelo responded to Clark at that meeting: “And then we’d be in negotiations forever. It’s just ongoing.”
D’Angelo will have plenty of “ongoing” work to do before the contract expires in June.
“We should know more after February when the state lets us know what our funding situation will be,” Broderick said. “In the meantime, we’re doing everything we can to try to get a better state funding situation.”
At the last meeting, the board passed a resolution to communicate Bayonne’s funding dilemma to state officials. “We’re trying to set up a meeting in Trenton to explain how dire our situation in Bayonne is,” said Broderick. “The formula [the state] instituted, they’re not actually following.If they followed it, we wouldn’t be in this financial situation, and we wouldn’t be in these negotiations.”
Despite perpetual frustrations with a broken school funding system that hurts school districts across the state, Broderick said, “We still have to work with what we have on the table. We’re hoping it improves, but we have to continue working if it doesn’t.”