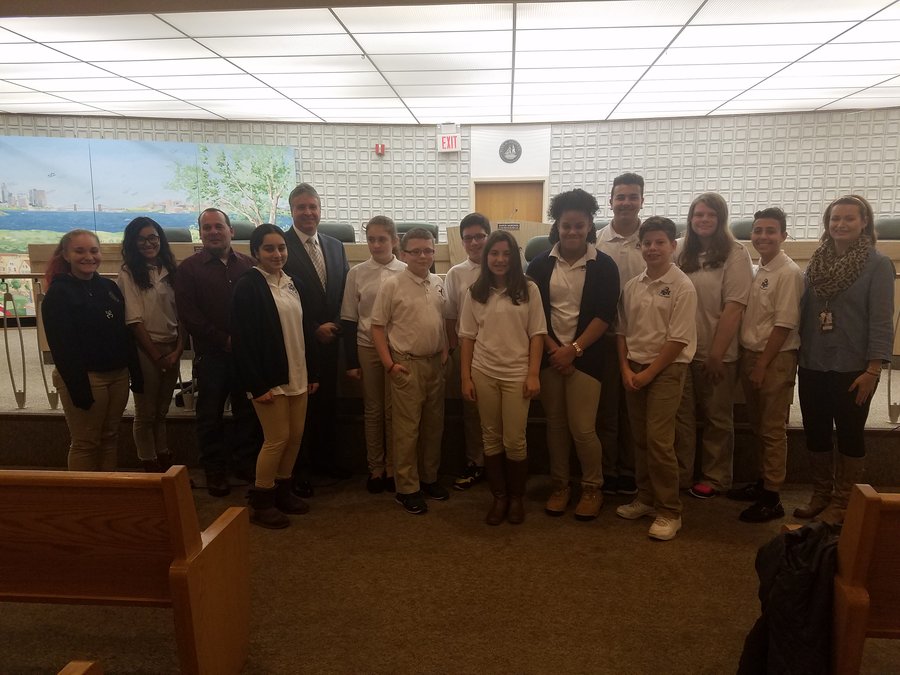 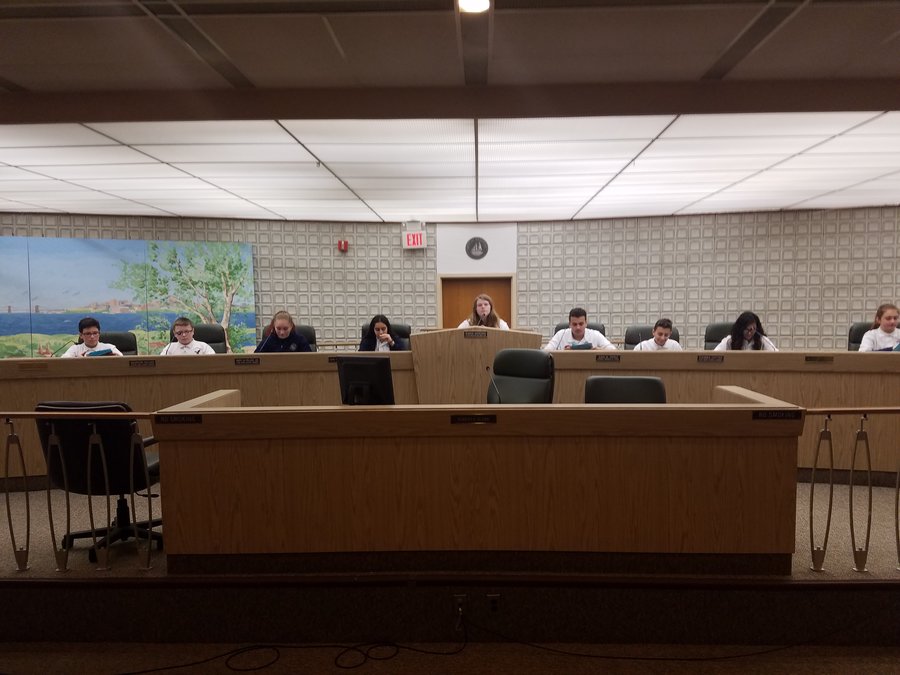 The Henry E. Harris Student Council held a meeting at the official council chambers at city hall on Thursday, January 12, as part of a weeklong series in which Mayor James Davis hosts council sessions with elementary schools across the city to encourage civic engagement as well as to speak with students personally about issues facing the Bayonne community.
Sitting at the center podium reserved for council presidents, Henry Harris Student Council President Maggie Caley called the session to order and read through agenda items. The student council’s focus was primarily on fundraisers and donations, including the donation of $597.40 for the Bayonne Rotary Club for its Water Wells Project and a veterans’ holiday drive. It planned a student council meeting with Superintendent Dr. Patricia McGeehan and Henry Harris Principal Kazimir in February that will provide hot cocoa and donuts to attendees, and a Bayonne High School Leadership Summit to introduce eighth graders to the student government structure at the high-school level.
The student council meeting is meant to reflect the same governing structure as that of the city council. It runs campaigns, gives speeches, and is democratically elected by student peers.
Dominic Rosario, a Grade 7 representative, said he ran for the student council to “interact with the community and school members.” Vice-President John Salib said he ran “to get involved and to help out people in the community who need help.”
The students represent a constituency, and when they had the chance to speak with the mayor directly, they voiced their peers’ concerns. Student Council Treasurer Aixa Gonzalez told the mayor, “I’ve had students ask about possibly getting a teen center in town,” to which the mayor politely responded, “That’s a tough one,” citing practical reasons why the idea may be a long shot. The two sides found middle ground in the possibility of organizing more regular dances. Student Council Vice President John Salib asked about the possibility of creating an indoor soccer league. The mayor responded that he wanted to bring varsity and junior varsity sports to elementary schools to better prepare young athletes to compete on the high-school level.

“Will anything be done about the buildings closed down on Broadway?” — Esha Darr, Henry E. Harris student council secretary.
____________

In defense of democracy

The students, who demonstrated an impressive level of civic awareness, asked Davis questions about local issues, turning the council meeting into a de facto press conference.
Development at the former Military Ocean Terminal Base, Hudson County Park renovations, bringing a Starbucks to town, the possibility of bringing in a mall, and the decline of local commerce were all addressed. “Will anything be done about the buildings closed down on Broadway?” asked Esha Darr, student council secretary. The mayor responded by pointingto Bayonne’s industrial history, market trends toward internet commerce, the decline in malls, and the city’s efforts to revitalize Broadway.
“I was amazed at how much they knew,” said Davis, who has been hosting student councils every year since he took office.”When I was their age I didn’t know if a house was even being built in Bayonne. I didn’t even know who the mayor was. It just goes to show you that, with computers and the internet, how well-informed our youth are compared to how we were when we were younger.”
Even if these students end up registering to vote and turning out, the rate of youth participation in elections is abysmally low and troubling for proponents of a functioning democracy. Though youth are the fastest growing segment of the population, they consistently let the older generations make democratic decisions.
According to a recent Portland State University Center for Public Service study of voter turnout in the most recent mayoral elections in the 30 largest cities in the country, residents 65 and older were seven times more likely to turn out to the polls than their millennial counterparts (ages 18-34). If these trends continue, democratic representation will not reflect the interests of the public at large.
A 2015 Knight Foundation study showed that a lack of trustworthy information, a lack of understanding of how local governments work, and a high rate of relocation are among contributing factors in low youth engagement in civic activity. Though a national foundation, Knight fosters informed engagement in local communities. The study showed that millennials who had spent more time in the city where they live were more likely to believe in the importance of local elections and civic engagement.
“[The students] are always reading the paper,” said Danielle Raslowsky, a 5th grade math teacherat Henry Harris, who has been running the student council for five years. “They come to me all the time with questions. They love Bayonne and want to stay in Bayonne,and they’re excited about new things happening.”
Davis said that student councils like this one “absolutely play a major role”in fostering civic engagement and understanding. “Just look at some of the things they talked about…they wanted to be involved in this civic process.”