Mosque approval still up in the air

Another Zoning Board hearing planned 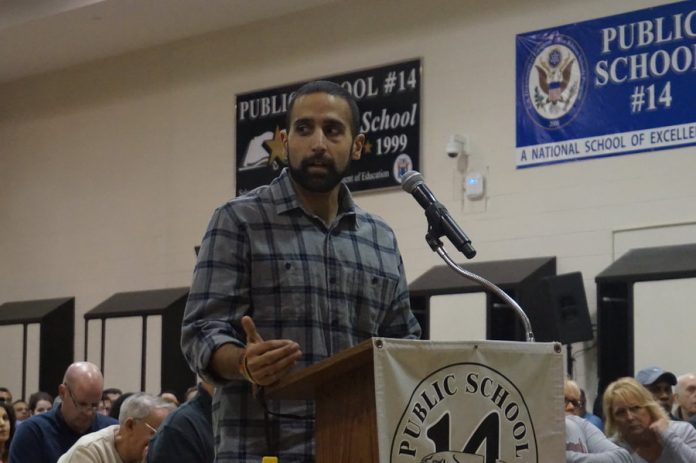 The Bayonne Zoning Board adjourned a special meeting on Monday, Jan. 24, at 11 p.m., before a vote was taken on whether to approve the conversion of a warehouse on 109 East 24th Street into a Muslim Community Center, including a mosque, classrooms and a soup kitchen. The board heard testimony from two expert witnesses and still has to hear from one more. The hearing will resume at another special meeting on a date that has yet to be determined.
Hundreds came out to the meeting at Nicholas Oresko School, many to show support for the Islamic community in Bayonne. Some had signs that read “Welcome the Bayonne Islamic Community Center,” and “Say no to Anti-Muslim bigotry,” none of which the public were permitted to display during the hearing, likely out of concern that the protests will bring too much attention to the matter.
Bayonne Muslims, the nonprofit organization that has been renting the basement of St. Henry’s School for community and prayer services for eight years, is seeking variances on parking and a buffer area between the site and adjacent properties.
Bill Finnerty, the group’s attorney, presented testimony from two expert witnesses: Paul Anderson, an exterior site plan engineer, and Joe Staigar, a traffic engineer. The third expert witness, a city planner, will testify at the next meeting.
Residents of the East Side neighborhood where the community center is planned were given preference to question the experts in the public forum; most concerns focused on parking and traffic. At last January’s meeting, the site was required to have 78 parking spaces without a variance, according to Anderson, but after splitting prayer services into multiple sessions, the parking-space requirement dropped to 62 spots because fewer people can be expected to attend prayer service at any given time. However, the group is seeking a variance for 36 spots, a point that was contested by neighborhood residents whose traffic concerns were compounded by the recently approved six-story, 189-unit apartment building planned for the same neighborhood.
Melanie Flora, an East Side resident, questioned Staigar’s traffic data, which supported granting the parking variance based on his surveys that showed ample on-street parking in the neighborhood during off-peak hours when the mosque is expected to get the most traffic.
“I don’t know what roads you’re looking at, not the ones I am,” she said. Saigar said his traffic surveys showed 50 open parking spaces within a block, and more than 100 empty spaces within 1,200 feet. He said the site “is very compatible with the surrounding neighborhood because when it demands its peak parking is when the surrounding streets are at their absolute minimum. The parking surveys bear that out.”

Peter Cresci, a local attorney, asked Joe Staigar, “Why do you believe this project is entitled to those public parking spots?” Staigar repeated the results of the parking survey.
Resident Omar Sandhu later asked the Zoning Board to clarify who is allowed to use public parking spaces, to which a zoning board commissioner replied, “Sandhu, just for the record to be clear, public parking is for everyone, regardless of race or religion.”
Joe Wisniewski, an outspoken critic of the Muslim Community Center construction, said, “This has been a two-year battle, and people have to know that it doesn’t belong in our community.” He said the mosque would disrupt the “integrity” of the neighborhood, which consists mainly of one and two-family homes.
Wisniewski implied that supporters of the mosque—seated across the room—were not from the area, even though a majority of them were. “Okay, on this side, how many live in Bayonne?” The board threatened to remove him from the podium, while his “side” applauded.
While anti-Muslim sentiments surface, some attendees who speak out against the mosque regularly participate in public meetings, consistently fighting against any development in their neighborhoods. Whether those developments are inviting young, urban professionals in swanky studio apartments or mosque-goers across the street, many residents of the East Side like their neighborhood just the way it is.
“We’re a mixed neighborhood,” said Melanie Flora. “We have blacks, whites, Asians, Hispanic. Everyone is welcome. We just don’t want the noise and traffic.” Flora was also at a meeting earlier this month contesting the construction of the six-story apartment building, saying that her property’s sunlight will be affected.

In support of freedom

Gene Woods, a teacher in the Bayonne School District, wore an American flag tie to the meeting to support the mosque. “If you want to be a real community, you have to accept people and let them be a part of our town,” said Woods. “It’s real simple.”
Bayonne resident Jordano Ibrahim, 20, came out in support of the Constitution. “I believe the First Amendment is under attack,” he said. “I’m not pro-mosque. I’m pro-liberty. It’s simply a matter of respecting everybody’s First Amendment right to do what they want to do.”
“We thought it is important to come out and show that there is a real groundswell of support in Bayonne, in Jersey City, throughout Hudson County,” said Sara Flounders, a Jersey City resident and member of the Jersey City Peace Movement. “The right to have an Islamic Center, for heaven’s sakes, this is not a difficult issue.”
Waheed Akbar, secretary for Bayonne Muslims, said before the meeting, “We hope to get through the meeting and get everybody’s concerns heard. I’m hoping we get a decision by the end of the evening.” His hope was not realized, but it came as no surprise to the group’s attorney, Bill Finnerty. “I was hoping to finish tonight, but given the nature of the questions, it was clear we weren’t going to get done,” he said. “We’ll get it next time.”

In a statement, Mayor James Davis expressed pleasure with the mostly calm and civil discourse at the meeting and thanked Nicholas Oresko Community School for hosting the event.
“I would personally like to thank the Bayonne School District for assisting us in our efforts to accommodate and encourage public participation in the meeting. I would also like to express gratitude to my staff who were able to arrange a live stream of the meeting on official City of Bayonne social media in light of the fact that the meeting could not be broadcast live on our community access station. No decision was made last night due to the meeting’s duration, which extended into the later evening hours. The parties involved are currently in the process of scheduling the continuation of the application in the weeks to come.”