City to convey 16 acres to Science Center for school

Council approves redevelopment changes for potential K-12 campus, but how will it run? 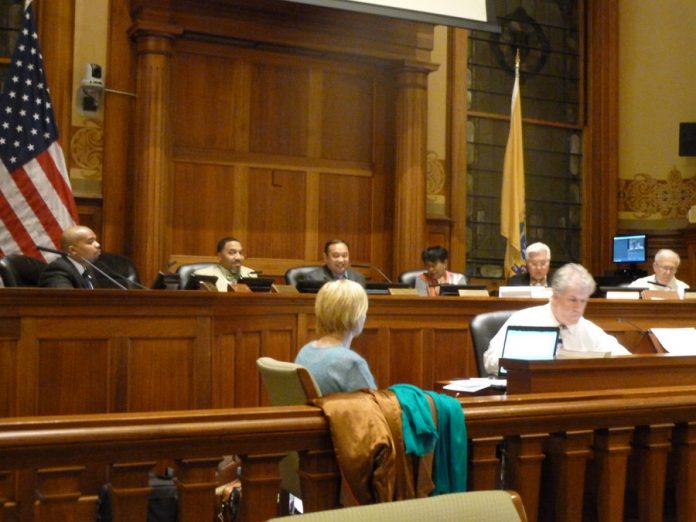 An ordinance that helps advance plans for “SciTech Scity,” a science and technology campus at Liberty Science Center, was adopted with unanimous City Council approval at the Jan. 25 meeting, setting the stage for the transfer of 16 acres of city-owned property. The Science Center plans to open a K-12 school dedicated to technology, but whether it will be run like a charter school, regular public school, or something else remains to be seen.
The City Council voted 8-0 to authorize the necessary zoning and other changes required to allow SciTech Scity to move forward. The vote follows the recommendation of the Jersey City Planning Board, which voted to grant the necessary approvals at its Dec. 20 meeting.
Depending on LSC’s ability to raise as much as $78 million towards the project, the city would donate 16 acres adjacent to Liberty State Park for the project.
In a joint statement, Mayor Steven M. Fulop and Liberty Science Center President and Chief Executive Officer Paul Hoffman called it “transformative project” that would create a comprehensive science and technology campus.
The $280 million project will feature a biotech lab, a coding lab, a technology business incubator, and a K-12 STEM-focused school, as well as a scholar’s village with residences for visiting scientists.
“This is one of the most exciting projects we have had the opportunity to work on, as it is an innovative, ambitious partnership with the private sector that will attract scientists and innovators from around the world,” said Mayor Fulop. “SciTech Scity will be a catalyst for the growth of a technology sector here in Jersey City, generating thousands of high-tech jobs and an entirely new industry for our workforce. And with the new STEM school, we will be educating our youth in the areas that will set them apart as leaders and prepare them for careers in technology here in Jersey City or wherever their future takes them.”
While focusing on emerging science and tech businesses, SciTech Scity is intended to attract already established technology companies to locate in Jersey City, as part of Mayor Fulop’s plan to grow Jersey City’s technology sector. SciTech Scity would also be an educational hub for the entire community with residents of all ages being able to utilize the leading-edge facilities, such as the coding lab to develop new apps or learn to write code.
“SciTech Scity will be a community of people and companies who come together to invent the future,” said Hoffman. “This transformative project will happen because of the unique partnership between Liberty Science Center and Jersey City, and Mayor Fulop’s visionary leadership.”
Plans for SciTech Scity will include Liberty Science K-12 School, which will focus on science and technology education to Jersey City and develop new curriculum that can be shared around the world; Edge Work, a workplace with more than 160,000 square feet of research labs, private studios, open workspaces, and a conference center; a Scholars Village providing short- and long-term residences for those working at or visiting SciTech Scity in addition to STEM graduate students in the area.
Construction on the project is expected to begin late 2018 with plans for an opening in 2020/2021. The project is expected to create approximately 2,526 construction jobs during its development, and once complete will create 600 permanent jobs, of which a significant portion will be expected to go to Jersey City residents. Funding for the project is expected to come largely from venture partners and philanthropists.

Not everyone is convinced

During the public hearing, however, Yvonne Balcer said she was concerned about the city “giving away” valuable land that could be sold to help offset taxes.
“Liberty Science Center is a private entity that charges a fee to get in,” she said. “If you’re going to give away land, why can’t you give some of it to a public school, and sell the rest to pay down the city’s debt.”
City officials, however, said the land was valueless and that this program was good for the city.
Balcer scoffed at this.
“You have 16 acres of property next to the light rail station and Liberty State Park and you’re telling me it is valueless? They should pay the city something for it.”
Another resident Gary Spingarn also raised questions about the project saying that while it is a good idea, he’s less certain about LSC’s ability to implement it, suggesting the city hire proper experts to look into the project before moving ahead.
He said the Einstein Alley technical corridor in East Windsor has significant space for startup tech companies, and questioned whether similar facilities in Jersey City will easily compete.
“The school is a great idea, but this is a private entity, so are we talking a private school or a charter school?” he asked.
Councilman Daniel Rivera said the proposal brought to the council indicated it would likely be a charter school.
“But we’re still in discussions about that,” he said.
When first presented, the council also wasn’t sure if the new campus would displace the Liberty Humane Animal Shelter located on a portion of city owned land near the proposed site.
“The Liberty Humane Society is a treasured neighbor to our center and an invaluable asset to all of Jersey City,” Hoffman said. “We at the center look forward to having the Society as our neighbor for many years to come. The welfare and wellbeing of its animals are paramount and its work must continue uninterrupted. SciTech Scity will in no way displace or impinge upon this mission.”
Al Sullivan may be reached at asullivan@hudsonreporter.com.

Focus on Positive Contributions that Italians Have Made to our Community