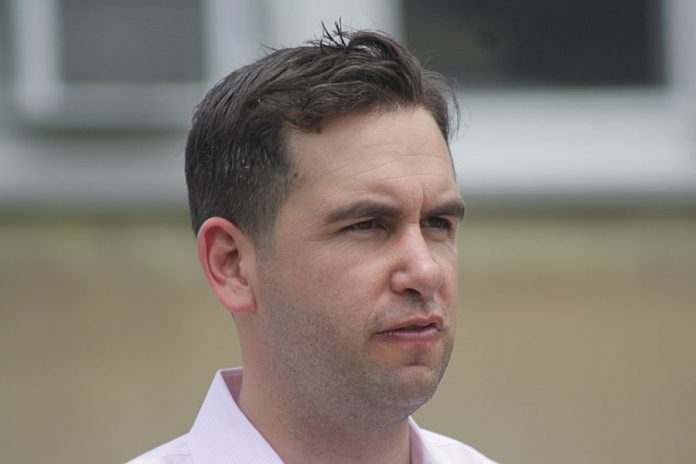 During his first week in office, Donald Trump said he’d crack down on immigrants who may have entered the United States illegally, including those in designated “sanctuary cities” in the United States. In response, Mayor Steven Fulop said Jersey City will join a number of cities nationwide that will resist Trump’s executive order despite the threat of losing federal funding.
“We intend to stand by our principles and values as a city,” Fulop said. “Jersey City was founded as a city of immigrants, and we are unwilling to be part of orders that break families apart or harm immigrants who are in this country.”
Thirty-six cities around the country have designated themselves “sanctuary cities” whose local police are told not to cooperate with federal immigration enforcement unless suspects are involved in criminal activity. Jersey City is not one of them, but Fulop said that he would resist efforts of federal officials to investigate people living here for immigration violations.
City Council President Rolando Lavarro also appointed three people to oversee a new committee on immigrants’ affairs last week (see briefs).
Jersey City has an estimated 23,000 people who could be targeted, according to city officials, who based that figure on information from Family Services and other agencies.
Trump signed orders on Jan. 25 that would strip federal grants from cities that fail to cooperate with U.S. Immigration and Customs Enforcement (ICE).
Trump and the GOP campaigned on the promise that they would expand efforts to investigate illegal immigrants.
Immigrants come to the United States for various reasons, some escaping unrest in places like Central America or Syria, some for a better life. Once here, they may have children or meet up with family members. Local officials are concerned that families that contain both documented immigrants and those who are undocumented may be split up, especially while some may be working to stay here legally.
Leaders in several Hudson County towns such as Union City said they would not cooperate with the executive order.
“Sanctuary jurisdictions across the United States willfully violate federal law in an attempt to shield aliens from removal from the United States,” Trump wrote in his order. “These jurisdictions have caused immeasurable harm to the American people and to the very fabric of our republic.”
What is uncertain is whether Trump’s order will affect only the 36 sanctuary cities or all cities that provide some level of protection.
Last week, the mayor of Miami said he would comply with Trump’s order.

Rep. Albio Sires (D-8th Dist.), who represents most of Jersey City as well as Union City, West New York, North Bergen, Newark, Weehawken and Hoboken, blasted Trump for the threat to withhold federal funds.
“Stripping funding from hundreds of cities across America will deprive resources from some of America’s biggest cities, the same places President Trump claimed to want to make safer,” Sires said. “His actions will take away precious resources from law enforcement officers that work hard to keep our communities safe. In New Jersey’s 8th district alone, these policies could strip funding from Jersey City, Newark, West New York, North Bergen, and Union City.”
He added, “So called ‘sanctuary cities’ exist so people living in these communities can come out of the shadows to report crimes in their neighborhoods and cooperate with law enforcement officials. Removing funding from these cities only makes it harder for cops to do their jobs, putting more people at risk. Additionally, nominees for the president’s cabinet have openly called for slashing critical federal funding for law enforcement; these critical programs such as the COPS program allow our cities to hire and retain police officers.”
Sires said local law enforcement should target violent offenders and criminals, not prioritize going from house to house to round up innocent men, women, and children.
“In the past, immigration raids have separated young children from their parents and torn families apart,” he said. “The administration should be working together with Congress to pass comprehensive immigration reform and fix our broken immigration system instead of taking finite resources away from fighting crime and putting it towards rounding up innocent families.”

Hudson County caught in the middle

Hudson County government will not likely become part of the sanctuary movement, partly because a huge amount of funding for vital programs for the poor comes from federal sources.
The Board of Freeholders last month renewed its contract with U.S. Immigration and Customs Enforcement (ICE) to house immigrant detainees at the Hudson County Correctional Facility, a program that helps offset some of the costs for operating the jail.
Since Hudson County Sheriff’s officers are not involved with pursing illegal immigrants in the way local municipal police officers can be, the sheriff’s department will also not be part of the sanctuary movement, officials said.
While Jersey City received just under $10 million in federal funds in 2015, federal funds account for a third or more of county operations, especially in areas such as welfare, family services, and HIV prevention.
Freeholder Bill O’Dea, who represents a portion of Jersey City, said the conflict puts the county in a difficult position.
“We are going to have to talk about this,” he said. “The county still takes ICE inmates.”
Officials connected with the Hudson County Department of Corrections, however, said the department handles immigration cases on two levels. The jail provides space for ICE detainees. On another level, the county has an agreement with the federal government to check immigration status of people brought in on criminal charges. Under this, corrections workers flag people who come up as illegal and report them to federal authorities. These are usually people who have been charged with a felony.
This differs from municipal police who might be deputized by federal authorities to turn in people they encounter on the street.
Law enforcement officials are concerned that illegal immigrants might not report being the victim of a crime or witness to a crime, if they think police will do an immigration background check on them during the process. This is one reason local police are asked not to work with ICE.
Since correctional personnel only deal with people who have been charged with a crime already and have no contact with the general public, their cooperation with federal authorities does not have a chilling effect on victims or potential witnesses.