Basketball star shines for the Bees 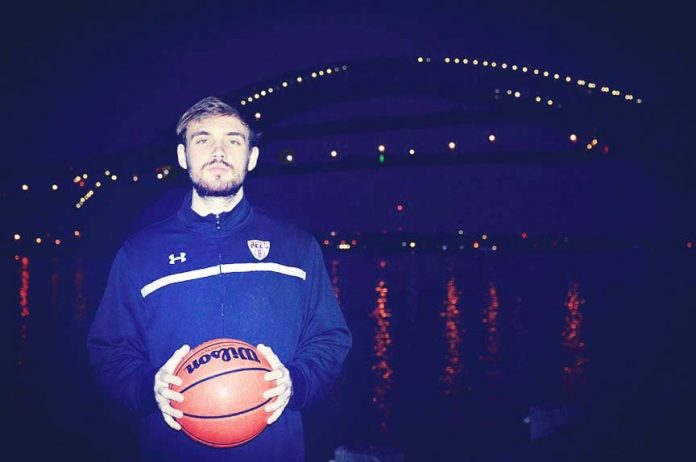 He attended Hudson Catholic High School for almost three years, but still, Pat Strzala was not happy.
“I wasn’t having fun,” Strzala said of his time at Hudson Catholic. “I wasn’t comfortable there. I always wanted to play for Bayonne, in the town where I grew up, with my friends.”
So last February, Strzala made the tough decision to leave the Hudson County basketball powerhouse and return home to Bayonne. He wasn’t able to play right away for the Bees. In fact, the 30 days he had to sit out because of the NJSIAA’s transfer rules carried over to this season and Strzala had to miss the first three games of his senior year.
It was a costly gamble, for sure, but one that Strzala felt was the right one to make.
“I felt like I wasn’t getting any better as a player,” Strzala said. “I knew it was going to be tough, but it was one of the decisions I felt like I had to make.”
Strzala spent the summer working hard on his game to insure that he would make a major impact on his new team.
The head coach at Bayonne, Mickell Taylor, knew that Strzala wasn’t happy at Hudson Catholic.
“I would see him at Bayonne games,” Taylor said. “I wondered what he was doing here. I thought, ‘He has a game tonight. Why is he here?’ One of his friends then told me that he was transferring to Bayonne. I just said, ‘Well, we’ll wait to see.’ The next day, he was transferring into Bayonne. I knew he was going to have to sit, but to have a player of his caliber come into your program is pretty exciting.”
Taylor knew that Strzala had the ability to put the ball in the basket.
“I knew he could score,” Taylor said. “I knew he was going to bring a different dimension to our team, especially the way he shoots from outside. He shoots the 3 [point field goal] like most people shoot layups. His teammates were excited, because they knew he was going to make them better.”

Taylor liked the way Strzala blended in with the new surroundings.
“He knew he couldn’t play, but he fit in well with the underclassmen,” Taylor said. “He practiced with the second unit, but he made those kids around him better. By the end of the month, the second unit was beating the first unit [in practice scrimmages]. He didn’t come in with a chip on his shoulder and acting like he was something special. He came in hungry and humble and more of a team player than anyone expected.”
Strzala didn’t want to ruffle feathers in his new school.
“I just wanted to come in and make the team better,” Strzala said. “I worked hard in the summer and that hard work is beginning to pay off now.”
That’s an understatement.
Because over the last two weeks, Strzala has been like nothing Bayonne has ever seen—and has become the kind of scorer Hudson County hasn’t seen in decades.
Strzala scored 37 points and had seven rebounds in a win over Columbia on Jan. 16. One day later, in a win over Ferris, Strzala exploded for 40 points and grabbed 10 rebounds. Two days later, Strzala was at it again, popping in 41 points in a win over Dickinson to improve the Bees’ record to 8-6.
It’s a three-game scoring spree that no one in Hudson County has come close to touching in ages. Maybe all-time county scoring leader Rick Apodaca came close in his days with North Bergen in 1998. Twenty years before that, another Bruin scoring machine named Danny Callandrillo was lighting up Hudson County scoreboards, averaging more than 30 a game, including games of 64 and 48 points, before heading off to Seton Hall.

But there is no one in Bayonne history to achieve that consecutive stretch of scoring and no one in recent Hudson County history.
That’s why Strzala was named a Hudson Reporter Athlete of the Week. He’s the first such honoree from Bayonne High School since the Reporter chain purchased the Bayonne Community News a decade ago.
Strzala was asked if he could have expected such an offensive explosion.
“Honestly, no,” Strzala said. “Coming into the season, Coach Mickell just told me to play my game, to shoot the ball when you have to. That’s why I’ve been practicing on my own, getting extra shots up. But to have this stretch? I can’t believe it, no.”
“It’s an incredible run,” Taylor said. “He has unbelievable range. I just tell him to shoot and he does it. He pulls up from 25, 28 feet and thinks nothing of it. He’s going to make more 3’s than he misses. We’ve had some decent shooters over the years, but nothing like this. This kid can really shoot the ball and it all comes from within the flow of the game.”
Strzala made nine 3-pointers against Dickinson and seven against Columbia.

“Without question, he’s made the team better,” Taylor said. “He makes everyone on the floor better. They want to play for him. It’s incredible to see.”
Strzala can’t believe he scored 40 or more in consecutive games.
“I honestly didn’t feel like I scored 40,” Strzala said. “I was just doing my job. I never worry about scoring. After the game, I ask the stat guy how many rebounds I had or assists. I never ask about points. I know it’s going to get tougher now. I’m not looking to score 40 a game. I’m just focused on getting Bayonne some wins.”
Strzala is being recruited by a handful of schools with Manhattan as the frontrunner.
“I definitely want to play at a higher level,” said Strzala, who will graduate from Bayonne in June. “There are a couple of schools that have called me, but there’s nothing serious. The recruiting is wide open. But honestly, I’m very happy. A lot of people told me that I would regret it [the transfer]. But I don’t. I’m the one who put in all the work and the results are staggering.”
And it’s safe to say that his confidence is sky high right now.
“There’s no problem with my confidence,” Strzala said. “My confidence is going through the roof right now. No one can guard me. No one can stop me.”
So Hudson Catholic’s loss has turned into Bayonne’s major gain.
“I guess you can say that,” Strzala said.
A lot of other people in Bayonne would have to agree.

Jim Hague may be reached at OGSMAR@aol.com.