Heads roll at the BBOED 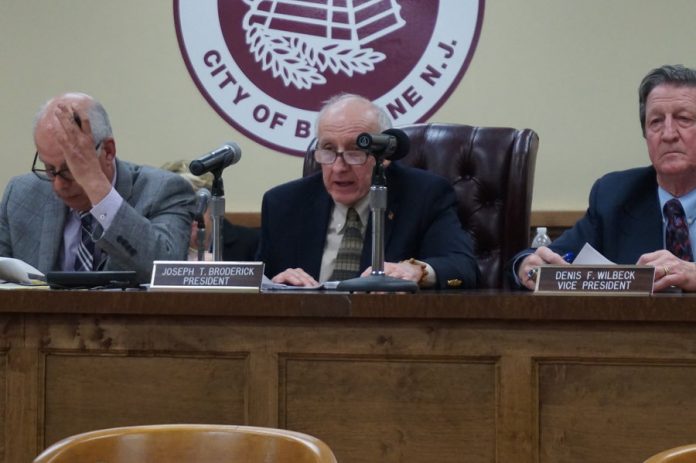 “With all due respect, if we had known about the financial difficulties, I would have hired him sooner. The payback is tremendous. I think we’re making a terrible mistake.” – Trustee Theodore Garelick
____________

The board voted unanimously to approve former Bayonne High School principal, Dr. Michael A. Wanko,as interim superintendent, choosing from a list of 12 candidates. Aside from serving as principal from 1981 through 2002, he was an interim superintendent at Manchester Regional School District in Passaic County from 2014-2016 and as interim principal of Manchester Regional High School. After serving as principal at BHS, he became a principal at Piscataway High School. In addition to his years of experience in public education, he has had his own education consulting firm since 1981.
His appointment is pending final approval from interim executive county superintendent Monica Tone. His contract, which is not yet hammered out, is for a one-year period, but the board has the power to extend it another year.

Apart from the 14 classroom aides and one librarian aide, the board laid off the district’s risk manager, Chris Patella, in order to clear his $85,000 salary. There was much discussion about his value to the district, with some on the board arguing that he saves the district much more money than he makes by informing important financial decisions.
The irony of a board of trustees weighing the risk of firing the risk manager was overlooked in the somber mood of the evening. “Seeing the finances that I’ve seen, we are really in a dire straight,” said Broderick at the workshop meeting prior to the regular meeting where trustees discussed the employment status of Patella before voting to lay him off at the regular meeting.
Trustee Theodore Garelick defended Patella’s hire in December of 2015. “I have been trying for years to get a risk manager in this district because I know the direct correlation of someone who is tasked with what will drive up cost as opposed to driving down cost,” said Garelick citing his experience in private business. “With all due respect, if we had known about the financial difficulties, I would have hired him sooner. The payback is tremendous. I think we’re making a terrible mistake.”
“Other districts in this county that are more well-funded than us do not have this position,” said Trustee Christopher Munoz, calling Patella’s position a “luxury this board cannot afford,” and said his role should be absorbed by the business administrator.
It seemed that no layoff or demotion was easy for the board. When it came to Patella, Broderick said, “We’re considering things that would have the least impact on students themselves.”