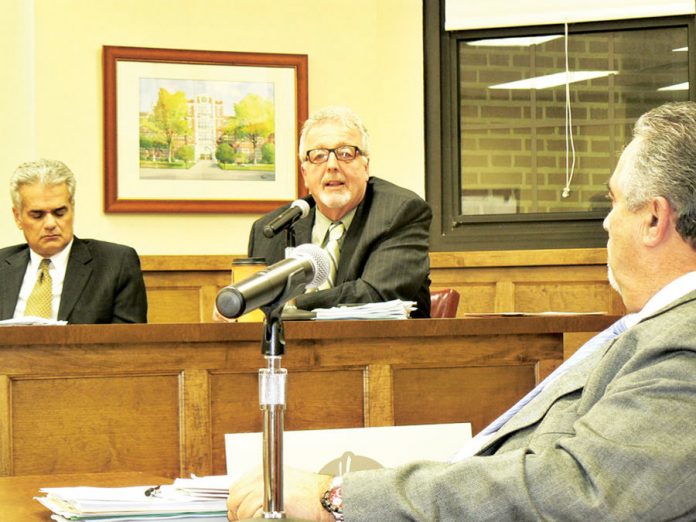 Superintendent Dr. Patricia McGeehan and Business Administrator Leo Smith visited the NJ Assembly’s Education Committee in Hackensack on Wednesday, February 1 to present the Bayonne School District’s perspective on the state’s school funding formula, which the state legislature is negotiating this year.
The hearing was one of four that Assembly Speaker Vincent Prieto arranged when he and Senate President Steve Sweeney could not agree on a formula. Sweeney’s proposed plan called to phase out state aid to districts and put a cap on districts whose enrollment has changed dramatically in the last five years, which would hurt Jersey City and Hoboken, districts, which Prieto represents in the Assembly.
At an event at Bayonne High School in May, Sweeney said he’s hoping for an increase of about $50 million in state aid to the Bayonne School District, nearly doubling the amount it currently gets (about $54 million in state aid for the 2016-2017 school year). Since then, the Assembly has held its own committee hearing independently of the State Senate.
NJ Gov. Chris Christie’s proposed “Fairness Formula” from last year would do away with increased state aid for districts with poor student and English language learners, which would effectively result in less funding for urban districts and more funding for suburban districts.
Only the first year, 2010, was fully funded until Christie, confronted with a budget gap when he took office in 2010, slashed $1.1 billion in state aid to schools. After a lawsuit, the Christie Administration returned $500 million in state aid, but only to the 31 Abbott districts, which does not include Bayonne.
Since the formula was passed in 2008, funding has largely been flat. NJ is heavily reliant on local property tax revenue to fund its schools, moreso than in most other states. It puts a strain on municipal finances, with cities increasingly unable to make ends meet using property tax revenue. The Bayonne School District getting more funding would mean a big reprieve for the City, whose budget is smaller than that of the school’s, and for taxpayers. NJ consistently ranks highest in property taxes in the country.
But disparities in communities’ abilities to collect enough property tax revenue and in school operating costs make the formula imperfect, so the NJ Department of Education issues state aid to make up the difference. The problem is, according to Bayonne administrators, that the state is not funding its current formula.

“I come here today to ask this committee to properly fund the Bayonne School District. We don’t want the formula changed, tweaked or abandoned. We just want it followed,” said Smith. “By the state’s own formula, the Bayonne School District is underfunded and under adequacy by some $10 million annually.”
Smith pointed to Bayonne’s neighbors to highlight funding inequities. “While our neighbors in Jersey City and Hoboken enjoy the benefits of former Abbott funding, we in Bayonne have struggled to make ends meet. This is unconscionable,” said Smith. “Our students are just as needy and deserving as our neighbors.”
Smith provided figures to support those inequities. Despite Jersey City having three times as many students as Bayonne, its school district receives eight times more in state aid. In Hoboken, $8,000 more is spent per student, despite having 8,000 fewer students. “In other words, our students’ needs do not stop at our city line,” said Smith.
McGeehan asked the Education Committee, “Why not Bayonne?” After decades working in the Bayonne School District, McGeehan said that she finds herself in a “tale of two cities.”
“One city is Bayonne, in dire need of state funding due to severe state underfunding once again. The other is a group of Hudson County cities to our north and west, granted millions of dollars more on a continuous basis, year after year,” said McGeehan. “Why not Bayonne?”
“We have increased enrollment and years of zero tax increase, yet we are not funded adequately. Those other districts are. Why not Bayonne? Our special needs numbers have grown, as have our English Language Learners and our economically disadvantaged. But our funding has not. For our neighboring cities, new schools are filled with unlimited state-of-the-art technology, class size is low, and administrator support is boundless. Why not in Bayonne?”

31st District Assemblyman Nicholas Chiaravalloti said securing school funding is his “top issue.”As such, he attended the committee hearing and said McGeehan and Smith did well presenting their case. He reiterated some of their points – that Bayonne is perpetually underfunded, that if the state only funded the formula, things would be different, and Bayonne’s decision to opt out of Abbott funding was in hindsight, a poor one.
“If we funded the formula, it works. The problem is, to fully fund the formula, it would cost the state an extra $1.4 billion,” said Chiaravalloti. “That money just doesn’t exist right now.”
He said that without a governor on their side, Democrats in the Assembly and the Senate have to be “inventive” to secure more funding.
“We have to solve a problem we inherited,” said Chiaravalloti. “But as long as I’m down there I’m going to fight to get funding for Bayonne.”

A blow for Christie

A NJ Supreme Court order on January 31 set back Governor Christie’s education agenda when Chief Justice Stuart Rabner denied the governor’s motion to re-open Abbott vs. Burke in an attempt to change the terms of districts’ collective bargaining agreements with teachers’ unions and to freeze state aid at its current level.