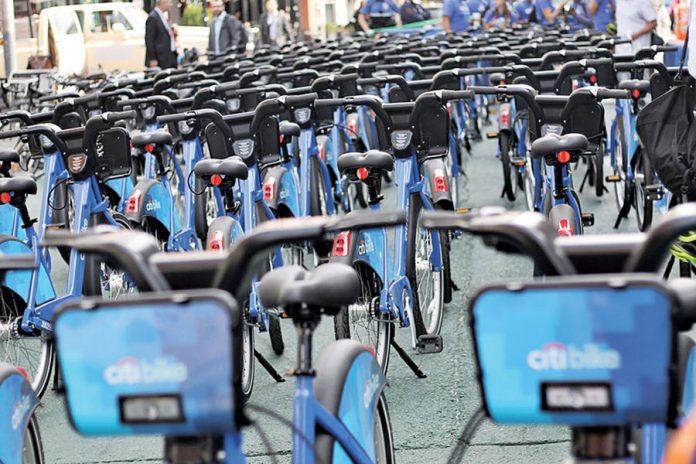 The City of Bayonne announced the issuance of request for proposals this week for the establishment and maintenance of a bike-share program in Bayonne. The program is a good fit with the development of one- and two-bedroom luxury apartments near the light rail, which attract a young demographic.
If the City were to implement the Citibike program, Bayonne may be more attractive to young professionals commuting to Jersey City or Manhattan, both of which have contracts with Citibike.
Another option is to sign onto Hoboken’s Hudson Bike Share program, which Hoboken Mayor
Dawn Zimmer implemented in 2014, or create its own local bike-share program. Either way, residents may soon have one more option for getting around the long peninsula city.
“Over the past two and a half years my administration has invested heavily in our roadway infrastructure and parks system,” said Mayor James Davis in a statement announcing the official request for proposals. “In the same time we’ve received increasing requests for the vetting and establishment of a bike share program. The institution of such a program would link our city at strategically placed locations and increase transportation options for local residents and visitors. I look forward to announcing an award next month and our subsequent steps in the weeks to follow.”
The city council will hold a public reading of all the proposals submitted by the RFP’s deadline of March 1 at 1 p.m. The contract is “not to exceed five years.”
According to the RFP, the contract specifies that bikes will be maintained by the contractor, and must be non-interchangeable to reduce risk of vandalism, have baskets and secure locks, and advertising space. The requirements are virtually the same as most bike shares in cities across the country – weather-proof equipment, payment authorization systems, and an accompanying smartphone app to locate stations. The RFP also preferences solar-powered stations, minimizing the cost of power and maintenance.
And like other bike share programs, Bayonne’s will be funded with revenue from membership and usage fees.
The city may not see a bike-share program for at least a year; similar programs in Jersey City and Hoboken took a year to implement after passing through the city council. Until then, the contractor, to be approved by the city council, will work with the City to recommend locations for stations, each taking up anywhere from two to three parking spaces.

“I’d rather have somebody come in because they know how to do it, rather than piecemeal something together that might not work.” – Mayor James Davis
____________

Two walkways are planned for Bayonne in the near future. The Hudson River Walkway on Bayonne’s eastern shore will connect with the same path that connects Jersey City, Hoboken, and Weehawken, and on completion, all the way to the George Washington Bridge.
The western shore is due to get a walkway connecting parks and natural shorelines, funded in part by a $900,000 NJ Department of Environmental Protection grant awarded to Bayonne earlier this year.
In addition to the city’s initiative to revitalize parks and make waterfronts accessible, a bike- share program could help attract developers looking to attract young and carless professionals to the area.
“Once we award the contract, then they’ll look at our city and say what will work in what areas,”Davis said. “You have to find areas that are big enough.”
Davis said he wants to preserve parking and that he is not looking to establish a separate bike-share program, like Hudson Bike Share in Hoboken.
“I’d rather have somebody come in because they know how to do it, rather than piecemeal something together that might not work,” he said.

In cities today, fewer people are using cars. According to U.S. Census data, 23.1 percent of households in Bayonne have no vehicles, a much lower percentage than Jersey City (38.6), Hoboken (35.1), both with bike-share programs of their own.
“I don’t have a car, but I only sometimes ride around here,” said Shannon McDyer, 27, who lives on Avenue E near the 34th Street Light Rail Station and commutes to Manhattan. “I’d sign up [for a bike-share program] if I could use it in [Manhattan] and Jersey City, too, or ride around here. I’d be able to explore more.”
“As long as I can still park here,”said Gary F., 50, who lives midtown on Broadway. “What’s more important, a bicycle or a real car? You’re not transporting your family on a bicycle.” He works in South Jersey and does not ride bicycles. “It might not be so much space but we need it. It’s always hard to park already.”
When The Bayonne Community News covered cycling in Bayonne last year, Richard Gonzalez, owner of RG’s Bicycle Shop on Broadway, argued for better cycling infrastructure for commuters.
“They need to make bike lanes,” he said. “The ones they have around here aren’t real bike lanes.” The “lanes” he is referring to are the bicycle signs painted on the street that are meant to remind drivers to share the road, as opposed to painted lanes that are meant to separate drivers and cyclists.
When a bike-share program is installed, an increase in cyclists is sure to follow, along with the need for infrastructure such as bicycle lanes. The City’s Master Plan is expected to be unveiled this spring, and Suzanne Mack has said that bike lanes were considered in the planning process.
Some residents may oppose the program if stations occupied valuable parking real estate, given Bayonne’s high rate of vehicle ownership and home dwellers coveting the privilege of ample street parking.
The Davis Administration is betting on cycling to maximize the use of open space and attract development. Time will tell if the choice will work as well as it has for Jersey City and Hoboken.