Lessons in food prep become a lesson in compassion 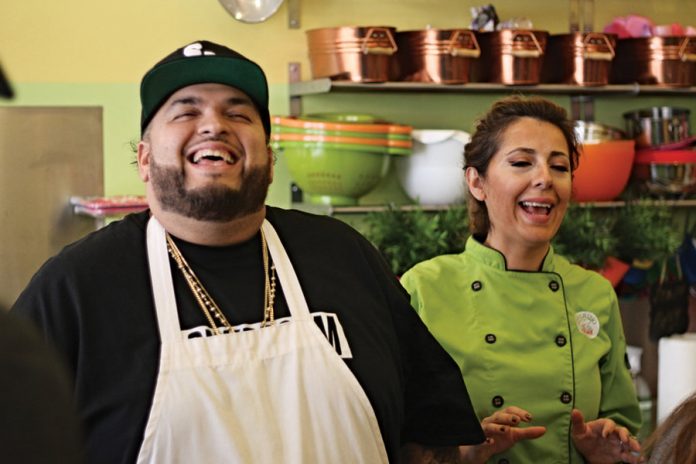 Suraj Kaufman, owner of the Sneaker Room store in Bayonne, has joined a group that helps make sandwiches for people living in homeless shelters.
On a cold Saturday afternoon, the windows of Bambino Chef at 213 Newark Ave. in Jersey City steamed up as more than two dozen kids from downtown Jersey City stood around two very long tables making sandwiches.
Rene Safarova-Gonzalez, the owner, opened the store about five years ago in what she thought was an upscale neighborhood, only to find that in some cases, the rich lived side by side with a fair share of homeless people.
Her business offers cooking classes for kids. But since opening her doors, she discovered that there is a social component to her classes she did not anticipate – teaching kids who are relatively well off to help the less fortunate.
Calling her business “a cooking studio,” Safarova-Gonzalez normally offers a variety of events, from cooking lessons for kids, young adults and families, to baby and bridal showers and birthday parties.
A Newport resident, with three of her own kids to take care of, she said it was always a dream that she could make a living cooking and working with kids. But the charity aspect came later, when she began looking around for ways to give back to a community that helped make her dreams come true.
“We’ve been making sandwiches for about three years,” she said. “The kids assemble them, and someone brings them to local shelters such as St. Joseph’s in Hoboken and St. Lucy’s in Jersey City. This year it’s bigger and more emotional.”

Raised in the projects

Suraj Kaufman, a lifelong Jersey City resident, said he grew up in the projects and came from very humble beginnings.
“I know what it’s like to be poor,” said Kaufman, who along with his two kids, helped the other kids assemble sandwiches; he helped provide the ingredients.
Always fascinated with sneaker culture, he recalled asking his mother to buy a pair of $130 sneakers when he was young. This was 1992.She told him the sneakers cost more than they paid for rent, so he had to forget about those sneakers.
He started to collect sneakers and hoped for a time when he could make a living selling them. He was working as a dispatcher at a Jersey City-based water company in 2006 when his mother died of colon cancer.
Fate dealt him another cruel blow when the water company eliminated his position while he was on leave under the federal Family Leave Act. He needed to make a living to help support his two kids.
Then, in the mail, he received a letter from his mother she had written prior to her death and a share of Nike stock, an inspiration that he should follow his passion. So he did.
He got a loan from his dad to open his first store on Brunswick Avenue in Jersey City, a 300-square-foot space. But because the economy wasn’t right yet with sneakers being overpriced and his inability to get a Nike franchise, he said, he was forced to close the doors.
He didn’t give up. In 2010, he opened a new store in the Heights, what he called his flagship store on Central Avenue, a 3,000-square-foot place that kicked off with a bang when he brought in sports stars such as Victor Cruz, Justin Tuck, and Steve Weatherford of the New York Giants, as well as players from the New York Knicks. Later, he opened a second store in Bayonne.
Making sandwiches for the homeless is not the first charity event he’s taken part in. Partly as a tribute to his mother, Kaufman leaped into the effort to combat cancer when he and Victor Cruz established all mind Nikeid to raise money for Breast Cancer Awareness.

Finding time to give back

As he made sandwiches, Kaufman explained to the kids at Chef Bambino the importance of giving back.
He asked who had a TV set, and all the kids raised their hands. He asked who had an iPhone or TV games, most again raised their hands.
“Well, a lot of people don’t have those things,” he said. “A lot of people don’t have enough to eat. This is about finding time to give to the less fortunate.”
Wearing clear plastic gloves, the kids spread mayonnaise on cut-open sections of long rolls, put down layers of cheese and meat and assembled these for transport to one of the shelters.
“I love doing this,” said Claire, a girl from Jersey City. “I did this last year, too.”