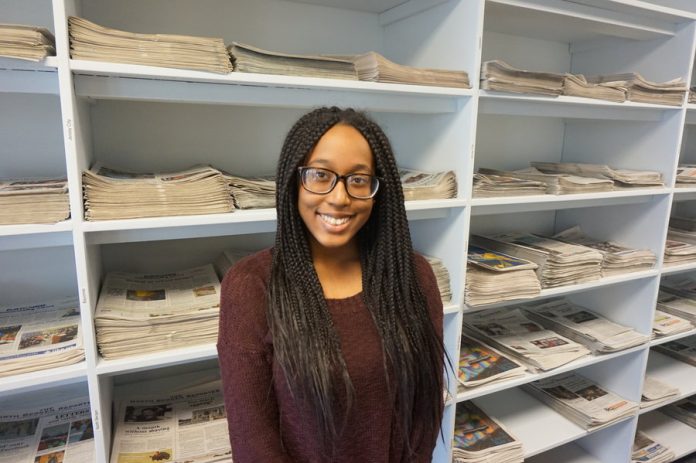 Businesses all over Bayonne mentored high school student-interns for two days last week, as part of the Bayonne Junior Chamber of Commerce program, a partnership between the Bayonne Board of Education and the Bayonne Chamber of Commerce. In total, 20 Bayonne High School students were placed with seven participating members of the Bayonne Chamber of Commerce, based on career interests.
Bayonne Medical Center brought in Jonas Gomes, a junior interested in medicine, while BCB Bank had Victor Cotto, a senior planning to major in finance. Interns also visited Cape Liberty Cruise Port, Provident Bank, and Angela’s Mum Floral Designs.
Leigh Ann Schaefer, one of the primary program organizers, a business teacher at BHS, and an academic advisor, said, “The goal for the program is to offer additional learning opportunities for students outside of the classroom, exposing them to real life business situations, and to further prepare them for a life after graduating high school.”

A day in the life

Here at the Hudson Reporter, we hosted two interns. Leanna Wilson, a junior who aspires to enter a pre-law program in college, met the production, sales, and editorial staffs.In the process, she learned the often fast-paced deadline environment of the publishing business.
“I learned that in a business, especially this one, if something goes wrong, it affects everybody at the company, and it takes everybody to get the job done, “ said Wilson. “The sales manager called it the ‘trickle-down effect.’”
Wilson said what she learned at the newspaper reinforced her desire to write and her appreciation for objectivity. Through conversations with the co-owner, she learned that the skills acquired in a career in journalism often overlap with careers in law. “I didn’t up until today [see the relationship], but the co-owner [Dave Unger] told me that he knows police officers who are in journalism and people in law who are in journalism, and it’s easier for them to carry out their job and also be able to do that kind of work,” said Wilson. “I didn’t know the two went together.”
Serena Gonzalez, a sophomore who went through the intern-for-a- day program, is interested in forensic science, so it’s no surprise she paid attention to detail in the editorial process of writing and producing a weekly local paper.
The Hudson Reporter, while a journalistic enterprise, is a small business with employees who have been working closely together for years.
Gonzalez took notice of the small-business workplace dynamic. “I was talking to everyone who said that everything they do comes together as a puzzle,” she said. “It’s really nice to see that people work together, and treat each other like family basically.”
Thursday was a deadline day for some of our eight weekly papers, so writers and editors were bustling around the office, giving Gonzalez some peeks into their editorial process.
“I learned that everything you write and take photos of has to go through a certain amount of people until it actually gets published,” she said.
An avid reader and occasional fiction writer, Gonzalez said seeing the newspaper production process inspired her to write more herself, even consider a career in journalism. “If I don’t do forensic science, I’d want to do journalism,” she said.
Said Editor Kate Rounds, “You hope to go through life not needing an attorney or a forensic scientist, but if you do, these two would be tops on our list.”