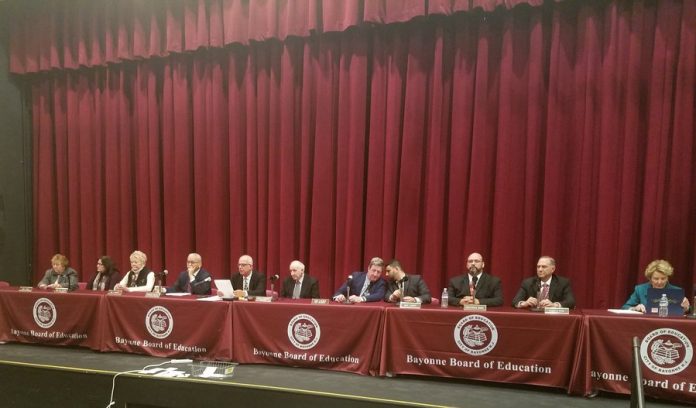 The Bayonne Board of Education (BBOED) continued its round of layoffs and demotions at a meeting on February 28 in an effort to cut costs amid a reported $2 million budget deficit that increases by $6,000 every day, and is expected to balloon to $6 million by July, according to BBOED Board President Joseph Broderick.
After 16 district employees were laid off and six others demoted at January’s meeting, BBOED trustees voted to lay off two teachers and a guidance counselor, while two assistant principals and the Athletic Director were reassigned, saving the district about $42,000 this fiscal year. The layoffs are effective May 1, eight weeks before the end of the fiscal year on July 1.
Director of Athletics, John Calcaterra, was reassigned to teach physical education and health at John M. Bailey Community School, while the current physical education teacher was terminated.
Nicholas Oresko School Assistant Principal Tara Furmaniak was reassigned to the position of guidance counselor at the same school, displacing the current guidance counselor.
Henry E. Harris Community School Vice Principal Brian Belton was reassigned to teach art, displacing and terminating the current art teacher.
Trustees Carol Cruden, Mary Jane Desmond, and Christopher Munoz all voted against the layoffs, with Munoz citing the $42,000 saved in salary as futile in the face of the millions of dollars the district would need.
Stay tuned to the Bayonne Community News for the full in-depth report on the meeting.

The meaning of Memorial Day