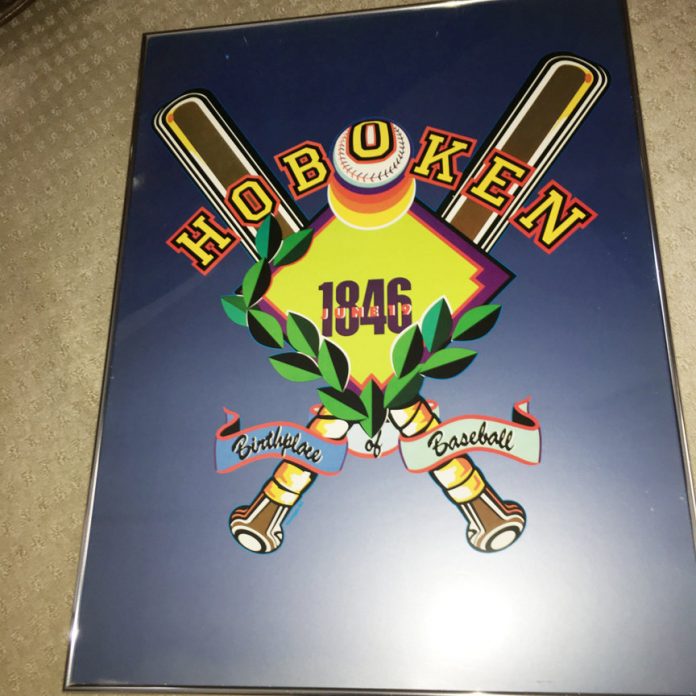 Someone once asked me how did the idea of the Demarest /Hoboken Sports Hall of Fame come about? Well, its origin made an indirect route in 1992 with a visit from my brother, who was living in Las Vegas.
We met at the Clam Broth House in Hoboken, a staple of lobster dining throughout New Jersey. My brother brought along a friend, Bart Klem, who knew a lot about Hoboken and by mere chance, was inducted into The Bogota High School Sports Hall of Fame in Bergen County. Our three way conversation took us through the factory tour of The Mile Square past, Hostess, Lipton Tea, Maxwell House, Tootsie Roll, American Pencil, Bethlehem Steel and somehow landed on the sports history of Hoboken, especially with first baseball game being played here in 1846,
My brother and Bart spoke about John “Honey” Romano, a Demarest High School graduate, who went onto play in a World Series and a MLB All Star as well.
Both felt it was time for someone to fast forward the idea of honoring sport stars of Demarest and Hoboken High School. Thus, the idea set in.
I later bounce the idea off my significant other. She immediately jogged my memory of the stories heard about the National Pop Warner Football Champs,) Jerry Molloy, Mike Rubino, Danny Ortiz, and of course The Lisa and Wendelken Brothers. Would having a place to honor these athletes become a source of Hoboken pride?
Quickly getting to work, reaching out to distinguished Red Wings whose accomplishments would never be called into question, my first meeting was with Bobby Lisa at the Hoboken High School Cafeteria, who was chewing on what appeared to be a meatloaf sandwich. He intently listened and nodded, “I’m in. Would you mind paying for the sandwich? Let’s speak at length tomorrow at the luncheonette.”
I also spoke with Maureen Wendelken, who was a legend of women’s basketball at Monclair State University. She felt it was the right moment to push the idea. The Demarest hook was there and thing were moving in a northerly direction. I had to make sure Michael “Porky” Pellechia was there to cover the 60’s and 70’s where he and his brothers were quality players at Hoboken High School.
The extensive network of relationships built over the years is starting to surface. Knowing Ed Groome’swife I got in touch with the “All County Lefty.”

Word moved fast, and in four weeks the key stakeholders were Fran Cirello, Lou Muraca, Andy Canonico, George McGuire, Buddy Matthews, and Matt Pecontino.
The first charter inductees were set, rules and regulations were established, and Stevens Tech was selected as the venue for the inaugural induction.
We received donations to offset dinner expenses for the honorees. There was neither a social media presence nor a web site to publicize the event. Mike Spina and Jim Hague (sports writers) became critical, cable television and free print ads were essential. The Hoboken Reporter’s Michael Richardson also played a significant part. What some may not know, we were right behind Dickerson High in starting a Sports Hall of Fame in Hudson County.
There will always be a contention over which local sports stars got into the Hall of Fame before whom. I even had to resist my own biases. The 1965 class of athletes produced coaches and ball players like Anthony Giordano, Bobby Wendelken and Ed Stinson. Although quite worthy candidates, one would not balk at their contributions as players and coaches, but what class?
The best memories from the earlier years are as follows: Most Humble Speech, Andy Fernandez, John DeMaio, Best Speech, Walter Fine about Peter Vecchio, Funniest Acceptance, Joe Sles, and Most Emotional Acceptance, Ron Dario.
The remarkable women athletes, whose legacy left a significant mark on our local sports teams, should never be overlooked. Female stars Maria Pepe, the first Little League Lady Pioneer in the country, as well as the track and field powerhouse Gwen White and Judy Burrell, are a few of the examples.
We must also not make the mistake of overlooking the professional sports accomplishments of John Romano, MLB All Star, to Bill Kunkel, Yankees, Jack Muraca, Jimmy Foster, Derrick Alston and John McMullen of Notre Dame.
Was Rashad Casey our best quarterback product? Were Rick Addeo and Mike Pellechia better than Dennis Milne and Jack Muraca? Were Mike Costello and Dennis O’Brien the best college baseball players? Was John Barone better than Ed Groomes? Were Bobby Lisa and John Wendelken the two best players to ever wear a Red Wing uniform?Was Tommy O’Connell the best swimmer or Matt Percontino the best soccer player?These are the questions that will endure for friendly debate at every Hall of Fame function.
I would be remiss if Raphael Castillo was not mentioned as the “trailblazer” for Latino Stars in baseball. In later years the Eusbeio Brothers and Danny Ortiz should also be recognized in baseball.
The dinner provides recognition for our local sports stars that carry and wore the Demarest and Hoboken name on the front of their uniform of yesteryears. I want to give a special acknowledgement to Joe Paullilo, Demarest ‘52, who gave us an online portal to keep in touch and read about the accomplishments of former sports athletes who walked the corridors of Hoboken High School. A Special Thanks goes to Coach Matthews and Bruce Radigan, whose time and effort keep the annual sports dinners a Hoboken hallmark.