State of the City (part two) 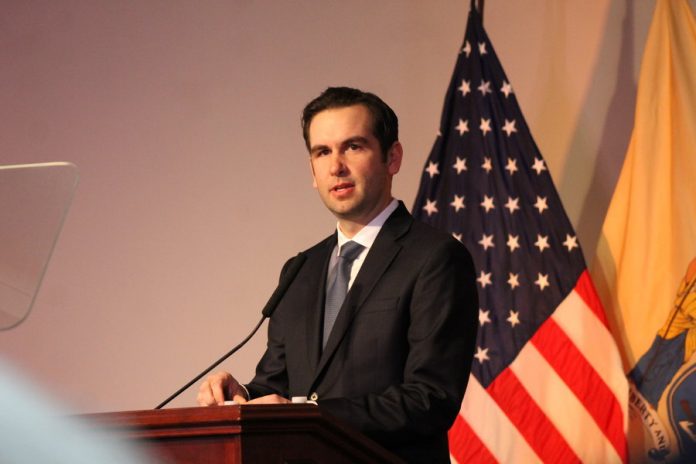 New York Yankee legend Yogi Berra could have described Mayor Steven Fulop’s second 2017 State of the City address as “Déjà vu all over again” – only not quite.
After delivering his first speech in February, focused on Ward F, Mayor Fulop resumed his road tour of the city on Monday, Feb. 27, with a speech geared for Ward C at Franklin L. Williams Middle School 7, at 222 Laidlaw Ave. (He has pledged to take his address to different neighborhoods around the city, but his speech schedule was thrown off by snowfall last month.)
The speech touched on the Journal Square area, development, unemployment, and the homeless.
“While we have worked hard to build one Jersey City, we understand that each of our communities require a tailored address that highlights the local issues most important to you and to your neighborhood,” Fulop told those who attended the event.
But he also gave a brief overview of the city as a whole.
_____________
“Overall the state of the city is strong, and only getting stronger.” – Mayor Steven Fulop
____________
“In July of 2013, I stood in front of City Hall and took the oath of office as the 49th mayor of Jersey City,” he said. “It was one of the proudest moments of my life, and something I remain thankful for each and every day. As your new mayor, I promised I would work to make you proud, and that is what we have tried to do as an administration for the past three and a half years… During those first few moments, on the steps of City Hall, I outlined my plan, and my hope, to build an administration that would truly move our city forward. We have had some incredible successes, as well as some challenging moments, but overall the state of the city is strong and only getting stronger.”
He said Jersey City’s unemployment rate has dropped to its lowest in 25 years. He attributed this to efforts at both job and small business creation, claiming Jersey City is at the forefront in the state, bringing more than 7,000 jobs to Jersey City over the last three and half years and more than 600 small business openings.
Jersey City currently has 10,000 new residential units under construction and another 17,000 approved.
“For the first time, we can say that development is not exclusive to one neighborhood,” Fulop said. “Whether you live on the West Side or in the Heights, you have seen the outcome of the hundreds of millions of dollars worth of investment that we have brought into our city.”
At times, the mayor sounded more like the candidate that he is, running for reelection, such as when he said more affordable housing has been built in the last three and half years than in any prior administration in the city’s history. Fulop talked about building housing for homeless veterans as well.
He also pointed out that Jersey City has become a model for a number of policies, such as paid sick leave and a $15 per house minimum wage for municipal workers, prisoner reentry programs, a bike share program, and insurance coverage for transgender city employees. He also predicted there will be no tax increase this year, for the third year in a row.

“In the early 1980s, the New York Times published an article predicting that Journal Square’s
road to recovery would be a long one, and highlighted the growing uncertainty that this
neighborhood could ever become the booming economic hub it once was,” Fulop said.
While development bloomed along the waterfront, Journal Square remained in disrepair.
“Today, I truly believe that Journal Square’s long road to recovery is coming to an end, and that the best success story of our ever-changing city is being written right now, and right here,” Fulop said.
“The Journal Squared project, which will be comprised of three high-rise towers, will
significantly change the city’s skyline upon its completion. From the top of the hill, the new
Journal Square skyline will serve as a reminder that development in Jersey City is spreading
west, and that our expansive skyline will soon rival that of any major city in the country.
“The first of these towers will soon begin leasing, bringing with it new residents and new activity… Yet, our goals for Journal Square’s revitalization go beyond new residential development… We aim to build a neighborhood that is dynamic and diverse, and one that will become a cultural destination for visitors throughout the region.”
Fulop said his administration intends to repair its contentious and litigious relationship with Friends of the Loew’s Theater in order to provide an entertainment center at Journal Square.
“In the past, we had attempted to initiate the restoration of this theater with the city as the driving force. We have come to recognize the benefits of collaborating with the Friends of the Loew’s on this project,” Fulop said. “We plan to jointly solicit RFPs [Requests For Proposals] for management and restoration beginning in late March to begin this process of revitalization.”
The Loew’s, along with nearby Mana Contemporary, he said, form the foundation for creating a thriving arts community. In order to expand the area’s community of artists, the city changed a redevelopment plan for the area behind Loew’s, which is intended to provide an incentive for investing in theaters, galleries, studios, museums, and retail.
“Through a partnership with the Jersey City Redevelopment Agency, this change will also increase contributions into the Jersey City Arts Fund, which will work to further develop arts and cultural spaces throughout this neighborhood,” Fulop said.
Associated with this is the development of the Pathside Building designed to become a new regional art museum.
The city also plans to finally open the historic Apple Tree House as a home to a community space with ongoing exhibits highlighting the history of city through a partnership with the New Jersey Room by the Jersey City Public Library. The offices of the Department of Cultural Affairs
and the Jersey City Economic Development Corporation will be located on the top floor of the building.
In a deal with Hudson County government, the city will transfer land to become the site of the new Hudson County Justice Complex that will include criminal and family courts. The city is also making infrastructure and safety improvements throughout the area, Fulop said.
Perhaps the biggest challenge will be the city’s ability to merge the new community with the existing community, he said.

Aid to the homeless

Part of the changes will also involve helping the homeless population in the area. The city in the last year invested more than $1 million to support homeless programs with local partners to provide outreach and rapid re-housing and rental assistance.
“This year, our funding priorities for the homeless will focus on the expansion of our outreach
services in Journal Square,” Fulop said.
Although the city has been active in park development throughout the city, Ward C has also benefited.
“Last year, we cut the ribbon on the new Pershing Field Playground, which includes new play equipment and water features,” Fulop said. “Many of you remember what the Pershing Field Playground looked like prior to these renovations, with equipment that was dangerous and unmaintained…This year, we will continue to make improvements to parks in Ward C, with plans to replace the playground at Pavonia Park this summer.”
Al Sullivan may be reached at asullivan@hudsonreporter.com.