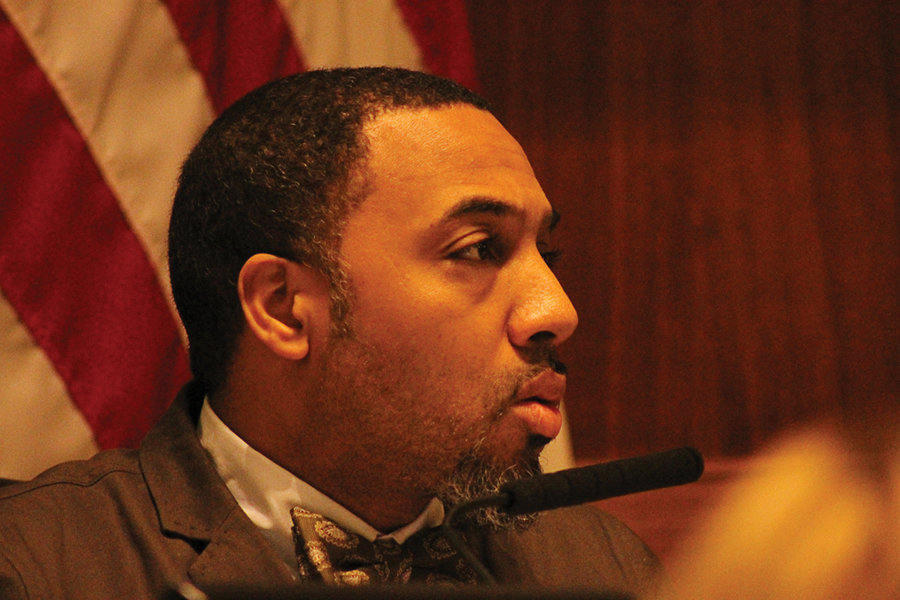 High praise clashed with warnings of doom and gloom in front of the City Council on March 22 when true believers in the tech village plans by Liberty Science Center dueled with skeptics. Both sides attempted to sway council members prior to the final adoption of an amended ordinance authorizing a land swap for the project.
During the four-hour marathon public hearing, Councilmen Richard Boggiano and Michael Yun frequently clashed with fellow council members and the city clerk in their attempt to raise questions about the viability of the project.
Both men, along with Councilman Chris Gadsden, voted against transferring city land needed to make the project possible.
The ordinance authorizes the city to hand over about 12 to 17 acres to the Jersey City Redevelopment Authority, which in turn will give the land to the Liberty Science Center for the construction of a new $280 million project that will feature a biotech lab, a coding lab, a technology business incubator, and a K-12 STEM-focused school, as well as a scholar’s village with residences for visiting scientists.
LSC President and Executive Director Paul Hoffman continued to lay out his vision of a technical nirvana.
The high tech campus would include a school, a hotel, and residential housing, as well as facilities for startup tech companies. His speech drew applause from about 60 supporters, many of whom were either employed by LSC or who volunteer there. Many of the critics were teachers, members of the teachers’ union, or citizens concerned about taxes.
Many of the critics, including Boggiano and Yun, raised questions about changing details about the project, such as how many acres the city is actually turning over to LSC, how much the land is actually worth, and how the city could get paid for the land, if ever.
City Counsel Jeremy Ferrell said the idea of the expansion came as a result of a conversation between Mayor Steven Fulop and Hoffman just after Fulop became mayor in 2013. This is part of the Fulop’s vision to make Jersey City into a hub of technology, similar to plans he had proposed for an arts district in Journal Square.

Facts change from day to day

In a four-hour standoff between supporters and critics, facts about the project seemed to change from moment to moment, undergoing a kind of rhetorical sleight of hand.
Boggiano pointed out that the number of acres had shrunk, from the originally proposed 20 acres in 2015 to 16 or 17 earlier this year, to what Hoffman said was a mere 13 acres by the time of the public hearing. The price tag for the project, Boggiano also noted, also shrank.
At the core of the critic’s complaints was the actual value of the land, which Boggiano and Yun claim may be worth as much as $5 million per acre based on assessments of similar tracts adjacent to it. Both wanted an appraisal made before the council handed the land over to the Jersey City Redevelopment Authority, the independent body that is charged with negotiating the final details of the transfer with LSC. A number of critics were wary of the JCRA since it is less directly accountable to the public than the council is.
Councilwoman Candice Osborne, who is a big proponent of the project (“I’m a techy,” she said) claimed that the council had the power to zone the land for whatever value it wanted, as parking lot or a high rise. But critics point out that the council gives up its authority over the land once it gives the property to the JCRA.
Dave Donnelly, executive director of the JCRA, said an appraisal of the property will be made just prior to when the JCRA turns over the land to LSC. This figure will determine what the LSC will owe the city if and when it actually can afford to pay it.
Many critics claim the LSC will not likely actually see a profit from the growth of the project, and will not likely ever pay the city back for the assessed value of the land. Since the council has no real idea of how much the land of worth, signing it over to the JCRA is basically signing a blank check.
Boggiano, Yun, and many of the critics questioned how the LSC will generate its revenue, and whether or not LSC will deed over portions of the land to private developers who in turn will seek additional tax abatements to cover the cost of developing elements such as the hotel or the residential development.

How will the city get paid back?

Osborne argued that the LSC is investing $78 million of donations that would otherwise be used for the existing center. But Boggiano said LSC needed the land transfer in order to approach donors to raise that money. LSC’s operating budget is separate from the money raised for this project, city officials said.
Critics are wary of the for profit/nonprofit partnerships that might eventually emerge out of the new high tech village, and wonder if enough revenue would ever be generated to pay the city for the land.
Revenues for LSC comes from donations, but also rather pricey ticket prices, parking fees and a contract with private vendors for gift stand inside the facility. Hoffman said attendance has risen and that well over 600,000 people come to the center annually, many from outside the county. Indeed, LSC is a destination for many school trips from districts throughout the state. More than 83 percent of Jersey City students come to the center each year, making schools one of LSC’s biggest customers.

Can LSC oversee such a big development?

Critics also raised questions about the changing conditions of the contract. Originally, Donnelly claimed the land was worthless, then revised the ordinance to say the LSC center would pay back the assessed value of the land after its other financial obligations are met, and would eventually share in future revenues. But at the night of the hearing, supporters changed their tune again, suggesting that the land gift was an investment in the future.
Former Mayor Gerry McCann, who helped found LSC, said the land and repayment was less important than the eventual outcome. He said his administration had sold land along the waterfront where Newport is now for very little as well as deeded over property for Liberty State Park at very low price.
Critics, such as Bruce Alston, were also concerned about the ability of LSC to actually oversee the construction of a project of this size, noting that until recently, the center had lost money and at one point came near to closing. Although always envisioned as a center of scientific study, LSC has had a bumpy ride, opening in the 1980s without even having basic wiring for computer terminals, work that had to be done later.
Hoffman admitted that LSC had had issues prior to his turning things around in 2011, but has since become a revenue-producing non-profit.

Will there be a brain drain from local schools?

While employees and volunteers from LSC paraded up to the microphone to speak about the vision of LSC and its ability to bring needed tech innovation and education to Jersey City, critics such as former Schools Trustee Ellen Simon and teachers’ union president Ron Greco questioned the impact of the proposed 500-seat K to 12 school included in the project.
Although one of the last minute adjustments to the ordinance stated that the school would be “a regular public school” to appease concerns of Councilman Chris Gadsden, Gadsden and others were concerned that nobody involved with the project actually met with the Jersey City Board of Education or its superintendent of schools to discuss this.
Many feared a brain drain from local schools if the school at LSC became a charter. But this would also have a negative financial impact on the school district, since funding for the new school’s operations would come from the district. Simon and Alston pointed out the district would have little or no control over how the money is spent.
Simon also said this would drain money from a district that may soon lose state aid, and that previous abatements the council has passed has reduced local tax support for the schools.
Board of Education Trustee Lorenzo Richardson said local schools are overcrowded, and suggested that if the city wanted to establish a new school on that site, it should donate the land to the Board of Education for construction of a new school.
Karee Skarten, a resident, suggested the city might lease the land to LSC, and would receive payment for use of the land.
Resident Daniel Sicardi, a frequent critic of the city’s redevelopment and in particular actions taken by the JCRA, said the project is not in the best interests of the city, despite claims otherwise.
Mia Scanga, another frequent critic of the administration, also supported the concept of leasing the land to generate a steady stream of income to the city.

Could be a center of innovation

Not everybody who supported the project was employed at LSC, but many of these had their own agenda. Friends of Liberty State Park President Sam Pesin said he was wary of more commercial use of the property and its potential encroachment on the park.
_____________
“We need to strike while the iron is hot.” – Matt Schapiro.
____________
Attorney John Fhroling also supported the project, calling it “something special” for Jersey City.
Those who spoke in support of the project said it would become the anchor of a new hub of innovation, and would provide local kids with mentoring and other opportunities in an area of technological study that is needed.
“We need to strike while the iron is hot,” said Matt Schapiro. “We may only get one chance to do this. We need this. And this will also preserve the land from other development.”
Council members who supported the move said they were doing so as an investment in the future.
“This is for our kids,” said Council member Joyce Watterman.
Al Sullivan may be reached at asullivan@hudsonreporter.com.