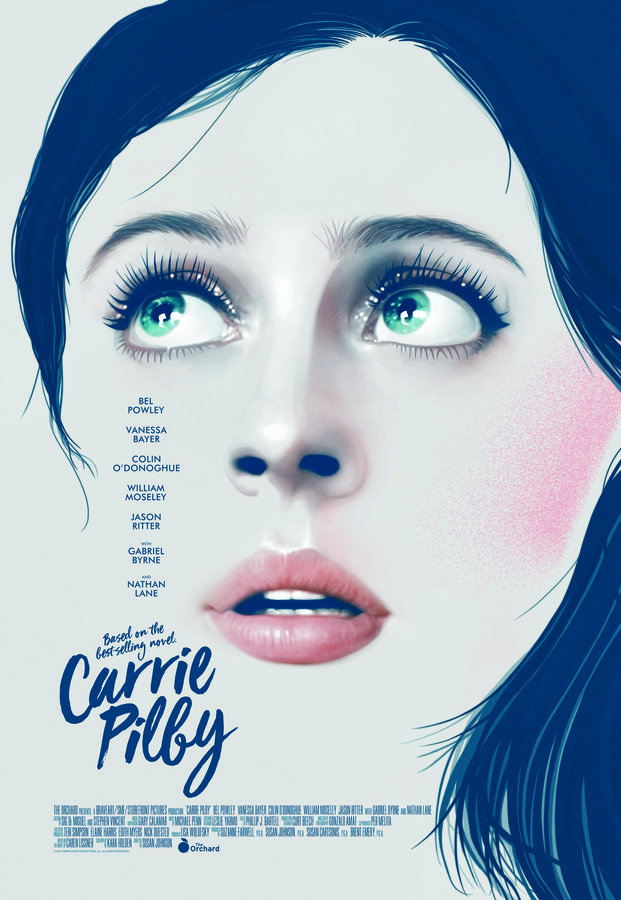 “Carrie Pilby,” a movie based on the offbeat first novel by Hoboken author Caren Lissner, and starring Jersey City native Nathan Lane, opens the weekend of March 31-April 1 in theaters in New York City, Los Angeles, San Diego, Bethesda, Md., and Chicago.
The comedy film also stars Bel Powley, Gabriel Byrne, Vanessa Bayer, Jason Ritter, William Moseley, Colin O’Donoghue, Desmin Borges, and several other big names.
Powley, a British actress who won raves last year in independent film “Diary of a Teenage Girl,” plays young genius Carrie, who graduated from Harvard three years early and now finds herself alone in New York City at 19 years old. The film follows her journey as she tries to make sense of the world as it relates to sex, morality, and relationships.
In the beginning of the movie, she has a know-it-all attitude and frustration with the “hypocrites” around her, but gradually softens as she meets with her psychiatrist, played by Nathan Lane.
The film, directed by Susan Johnson – who had previously won awards for producing independent films – received positive reviews after it was selected to have its world premiere at the prestigious Toronto Film Festival last September. In the Guardian, reviewer Jordan Hoffman called it an “ambitious, upbeat and surprising comedy” with “a clear moral center.”
The film opens in five cities next weekend and then may expand to others. After it completes its theatrical run, it will be available for home viewing.

Take One Video, take one

Lissner wrote the book around the year 2000 while living with roommates in Hoboken. After renting a video at Take One video on Washington Street, she thought of the opening scene, which involves a video store.
The book was published in 2003 and ultimately sold 74,000 copies worldwide. Around that time, Lissner’s literary agent contacted Hollywood film agent Shari Smiley, who has handled book adaptations including “The Devil Wears Prada” and “Gone Girl.”
“She liked the book and sent it to producers,” said Lissner.
In 2012 she was contacted by Suzanne Farwell, a successful producer in Hollywood (“It’s Complicated,” “The Intern”), about the rights to make it into an indie film.
“She and Susan Johnson had read the novel and were looking for a property to turn into Susan’s first feature film,” said Lissner. “They optioned the rights later that year.”
Carrie Pilby is Johnson’s feature film debut. It is rare for women to direct films, although they are making strides.
In 2012, the producers raised money via Kickstarter to hire screenwriter Kara Holden to adapt the book.
On the Kickstarter website, Johnson said, “I’ve always wanted to find a female Holden Caulfield. Carrie is brilliant, fragile, funny, conscious, inquisitive and brave enough to say the things we wouldn’t dare.”
Lissner said Johnson sent her drafts of the script for feedback.
_____________
“She starts out as a teenager who thinks she’s the smartest person in the room, but she gradually admits she doesn’t know everything.” – Caren Lissner
____________
“I got to give a few suggestions on the script, which was wonderful,” said Lissner. “I was very happy with how the script and movie turned out. Kara Holden’s script was true to the novel and also extends some of the storylines whose resolutions I had left vague. And it’s funny.”
Lissner added, “The character is always learning. At first she’s headstrong like most teenagers. Eventually she has to admit she doesn’t know everything.”
The movie is full of humor from Nathan Lane, Vanessa Bayer, and the other seasoned actors, whom Lissner got to talk to when they filmed in New York City in January of last year.
Lissner even appears in a cameo in the film, sitting on a bench reading as Powley walks past her.
On the set, Lissner briefly met Lane, who complimented the book and had a copy with him.
In an interview for a film festival last week, Susan Johnson said, “Nathan was perfect to work with. He read the book start to finish before saying yes to the role and came in with a dogeared copy and we went over things for hours. He would come in certain days with dialogue ideas and changes based on what he connected to in the book.”
Lissner said that the actors were well-rehearsed and serious, but not formal.
“They knew what they were doing, and all of them seemed to be excited to be there,” she says. “Susan Johnson and Suzanne Farwell, and the other producers, were all very welcoming and hard-working.”
She said Johnson, the director, made “amazing choices” to bring the story to life.
“The New York scenes are beautiful,” she said. “The filmmaking team really created an intriguing story that’s also beautiful to watch. I was also excited that Michael Penn composed some of the music, as I’m a longtime fan.”
She thought Powley was perfect for the title role.
“I think she did match up for what I envisioned for Carrie,” said Lissner. “She knew exactly how to play Carrie. I met her on the set a few times and then got to talk to her at the world premiere at the Toronto Film Festival last year, and she’s kind, a dedicated actress, and very smart.”

How to see it and learn more

The film can be seen the weekend of March 31-April 2 at the Village East theater in New York. Check Moviefone.com or the theater website for times and prices. It will also premiere at Arclight Theaters in LA, San Diego, DC, and Chicago.
Lissner will be at some of the New York City screenings next weekend. She also noted that she loves discussing the writing process. People with questions can email her via her website, carenlissner.com.
Besides serving as the editor-in-chief of the Hudson Reporter newspapers, Lissner published articles earlier this month in the Washington Post and on the Atlantic Monthly’s website. She also published satire on NationalLampoon.com and McSweeney’s earlier this year.
She said she is finishing her next teen novel, In for the Winter, as well as a memoir about her nerdy sophomore year in a New Jersey high school. Once finished, she will send them around to publishers.
“I’m lucky to be interested in so many things,” Lissner said. “My head’s filled with ideas for stories I want to write, as soon as I get a chance. I hope everyone can go see the movie the first weekend it opens.”
The film is being distributed by The Orchard.
The book is available at Amazon, Barnesandnoble.com, and other on-line and retail outlets. Lissner’s website is carenlissner.com.
Marilyn Baer can be reached at marilynb@hudsonreporter.com.