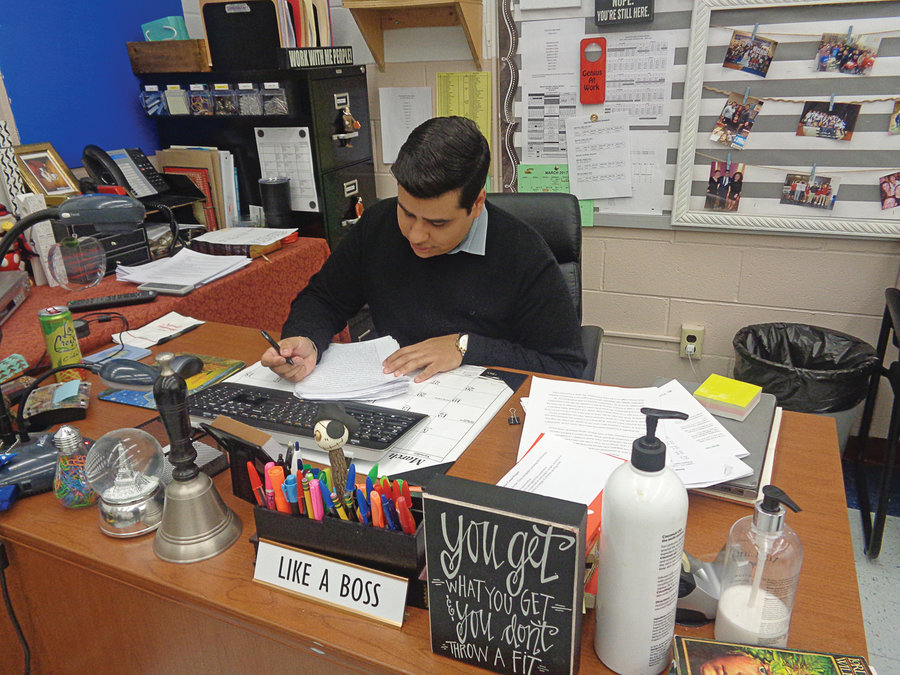 Thiago Leite knows firsthand the grip a tale can have on someone. As a child growing up in Brazil, his mother would frequently read his favorite book ,”The Little Prince” by Antoine de Saint-Exupéry, likely not aware she was birthing a future English teacher with each word.
“Those moments of my mom sitting with me, reading me those books while I still couldn’t read, or her taking me to the library, taking me to the bookstore to get new books, was where I got the idea of the telling of stories,” Leite said.
_____________
“Who can say that their job every day is coming in and telling people stories?” –Thiago Leite
____________
As it turns out, there’s a professional accolade the 29-year-old, who teaches at Secaucus High School, can attribute to those sessions: the New Jersey PTA Outstanding Teacher Award, which he won earlier this month at the PTA’s annual convention. Leite loves using the written narrative for developing his students’ minds and thought processes.
“My job, essentially, is telling these students stories,” Leite said during a recent morning at Secaucus High.
“And them learning from these stories. Who can say that their job every day is coming in and telling people stories? That’s essentially my job. I come, I tell them stories, and I help them learn from those stories.”
He teaches Honors English to 10th and 11th graders, and remedial English to 12th graders, and always loves how books can change their lives.

“There’s moments where students have had problems, at home problems, and when we’re doing a story, and they come later, after class, they tell you, ‘I related to that story. That story really helped me with my problems at home,’” he said. “They come in here and can have a respite and be outside of themselves while they’re reading that story.”
“These are teenagers. Every situation that’s happening to them, they haven’t had those learning experiences that are part of becoming an adult. These stories help guide students to become better human beings.”
On winning the PTA award just before his third decade, and only five years tenured, Leite remarked that, “I can only retire when I’m 65, so I have about 40 more years to go. To get this very prestigious award my fifth year of teaching, it’s an honor.”

But when classes end around 3 pm, the educator doesn’t just hop in his car and drive back to his Harrison home.
Leite then assumes his senior adviser role for the school’s Parent Teacher Student Association. The position has him assisting the PTSA in those extracurricular activities which are not considered clubs for the school’s seniors. For instance, he helps organize the senior prom, leads them in Spirit Week competitions against younger grades, and maps their class trips.
This year, he will assist two different class trips for the seniors: one to Six Flags: Great Adventure, the other to the town pool.
“It’s their last hurrah before prom and graduation,” he said. In his position, Leite considers himself a conduit.
“I see my role as a bridge between the students and the PTSA,” he said. “The PTSA runs events, I’m responsible for divulging the information to the students, and exciting them about the events.”
This year, the PTSA had its very first Mardi Gras event for the older students, for which Leite helped acquire donations and spread the word through advertising. At the PTSA’s monthly meetings, Leite clues in members about his students’ needs and ideas. He also brings ideas the PTSA has to the students.

Leite’s transition into teaching was a natural change from his previous aspirations. He began studying pre-med at Rutgers University. “But it just wasn’t me.” Soon, he traded the medical classes for a few English ones until a teaching assistant friend who was holding an education class asked him to attend. “It was her first class and she was nervous,” he said. “She wanted a friendly face. After that class, I started liking more and more the idea of becoming a teacher.”
He also comes from a bloodline of educators. Leite’s grandmother owned a middle school in Brazil and was a principal at the school, which he himself attended. (He was born in the U.S., before his parents moved him to Brazil, then back stateside around age 13, when they settled in Kearny.) One aunt was a school supervisor; another was a college dean.
As for his teaching style, Leite tries assuring students they’re all in this together, whether they’re in the wrong or not.
One time, a student cursed at Leite during class, prompting him to make a decision. He had the student leave the room for two minutes to cool off, before returning. The student complied with his request and soon returned to class.
After class let out, Leite held a candid discussion with him, telling the young man, “I don’t know why you’re doing this. Problem at home? I don’t care. The bottom line is, I am here, I am your teacher and I am your ally. You’re not going to get anything by cursing at me. You’re only pushing your allies away.”
One another day, another student reminded Leite why he does his job. “I have one student, Thomas, every day, at the end of the class, he would be, ‘Oh, Mr. Leite, now I have to go back to real life.’ There’s nothing that gives me more pleasure than that.”
Hannington Dia can be reached at hd@hudsonreporter.com