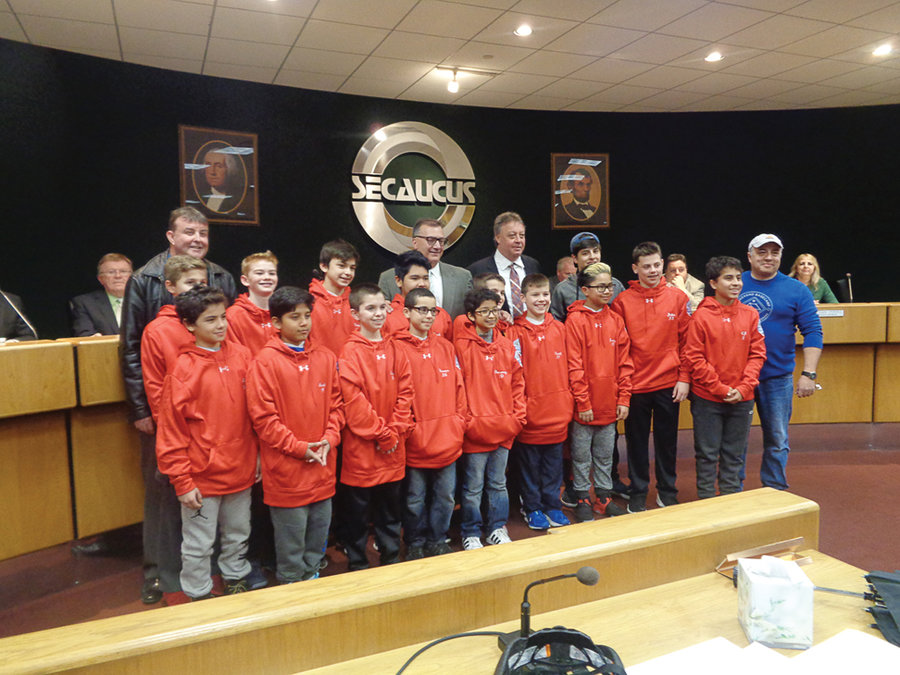 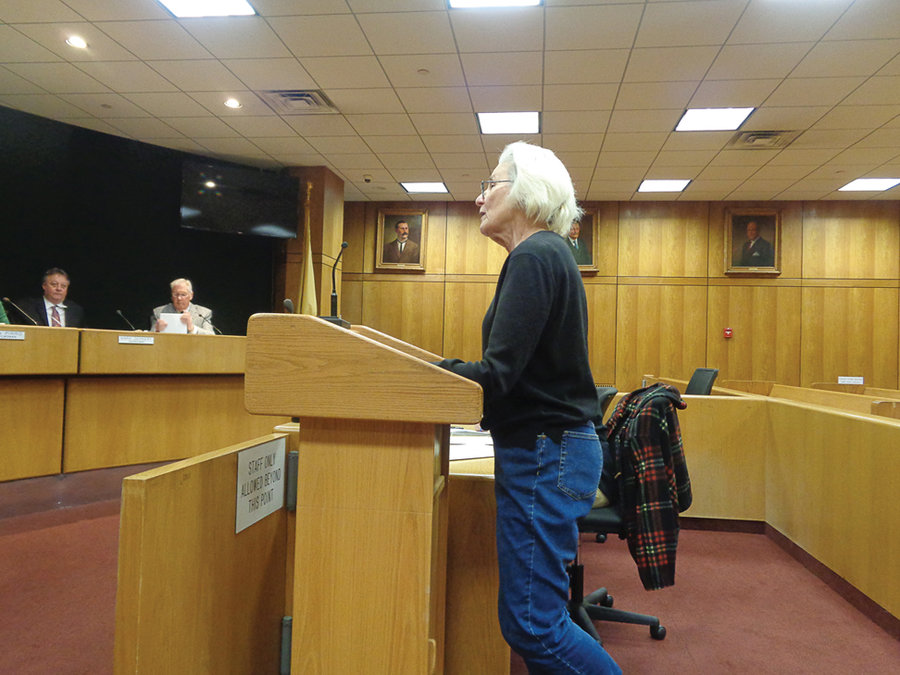 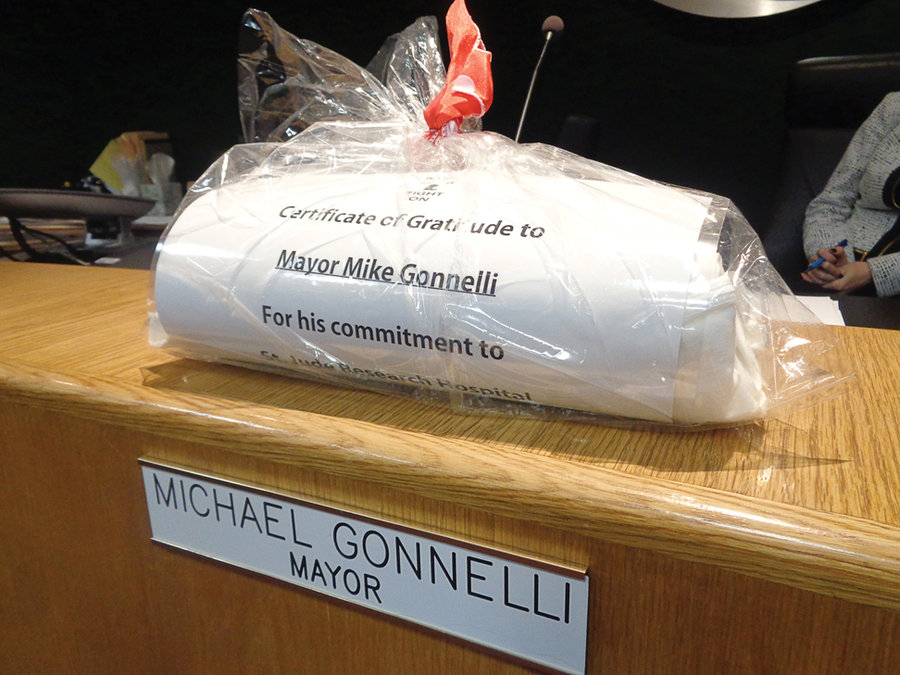 3 / 3
A certificate given to Mayor Gonnelli by three Clarendon School teachers.
×

3 / 3
A certificate given to Mayor Gonnelli by three Clarendon School teachers.

The town’s proposed $54.7 million budget, which covers spending from Jan. 1 through Dec. 31, will be up for a final hearing of vote on April 25 after being introduced by the Town Council at the end of last month. Even though spending is up from $51 million last year, the tax rate is the same as last year because more taxable property is contributing.
Property owners pay an overall tax amount determined by three separate entities: the town (determined by this municipal budget), the county (determined by a county budget each June) and the schools (determined by a school budget each spring).
The biggest spending increase was due to unionized employee salaries and benefits (city workers, police, and fire), officials said.
_____________
“[This is] the first time we’ve ever had that much money in surplus.”
–Mayor Michael Gonnelli
____________
The city is asking for more total taxes from residents this year (a tax levy of $37.9 million compared to $36.4 million last year), but because more are contributing, the rate stays level.
The city has also been able to keep a healthy $3.5 million surplus, “the first time we’ve ever had that much money in surplus,” according to Mayor Michael Gonnelli. Last year’s surplus was $1.5 million, Gonnelli added.
“We are very happy that our residents and businesses can benefit from this forward looking fiscal planning, as it has allowed us to keep our taxes flat, despite the fact that we’ve seen an increase in hospitalization and pension costs, increases in our contractual obligations, and have set aside $350,000 in reserve for tax appeals,”Councilman Robert Costantino’s statement said.
The budget also allows for $2.5 million in fully-funded road improvements, completely funded by taxpayers.
Town budgets are funded mostly through taxes, but also through state aid, grants for programs, and some court and permit fees.

Not for the birds?

The meeting also saw the introduction of an ordinance amending a previous one that regulated local bird feeding. The original ordinance allowed homeowners to only have one bird feeder, located behind their property, no closer than 12 feet to any other property line. The new ordinance will allow homeowners up to three private bird feeders, no closer than five feet to any other property line. One resident, Barbara Napierski, protested the ordinance during its public comments section.
“I’m really upset about this, and I’m asking you not to vote on changing the bird feeder ordinance, because I’ve had a problem for quite some time,” Napierski told the council.
“The ordinance now reads ‘one.’ My neighbors all have more than one. I’m talking three. I’m talking peanuts. I’m talking bagels in my yard sometimes. The bird droppings are awful. Last year, we found six groundhogs in my neighbor’s yard. We had a large, dead bird in the cellar. The food attracts every kind of animal under the sun.”
Napierski added that, “The ordinance is never enforced. Whenever you call, nothing happens. The same people continue to do this, and nothing happens.”
After Napierski spoke, the council decided to table the ordinance for a future meeting and discussion.

Gonnelli handed out 10 plaques to local restaurants for their humanitarian efforts in the town.
“You’re really what makes Secaucus a great place,” Gonnelli told the restaurant owners as they received their commemorations. “They feed the homeless, they feed our seniors, they do so many things for us. From the bottom of our heart, thank you.” The restaurants also help supplement the town’s food pantry program, helping provide hot meals for low-income residents.
They include Panera, 200 Millcreek Drive; Goodfellas, 254 County Ave; Olive Garden, 500 State Route 3 West; Vito’s Bakery, 87 Plaza Center; and Bagel Buffet, 127A Plaza Center.

The mayor also gave three teachers, from the Clarendon Elementary School, an award of recognition for their efforts in raising money in math-a-thons for the St. Jude’s Children Research Hospital in New York. In turn, the teachers gave Gonnelli a certificate of gratitude for “everything that you do for us.”

The council gave championship sweatshirts to the Secaucus Youth 13 soccer team. The team won first place titles this year in their division for the Northern Counties Soccer Association (which they also won last year). The teams in the NCSA – which allows youth up to age 19 – compete against other teams in Hudson, Essex, and Bergen counties.
“It’s fabulous – it’s a great honor for them,” said Noel Kelly, one of the team’s head coaches, before the Council meeting. “They’ve had a really nice trajectory,” added Pedro Martinez, another head coach. “A lot of them have been playing together since they were about five or six years old. So they’re used to playing together as a team, and that’s why they’re so effective on the field, because they know each other so well. They look at each other and they know what the other one’s going to do.”

The council took a moment to acknowledge the Secaucus Volunteer Fire Department’s role in helping fight the March 4 fire in Union City, which killed one year old Eddie Gonzalez Jr., and displaced over 50 families.
“We should be very proud of our fire department in Secaucus,” Councilman James Clancy said. According to Gonnelli, the town also donated clothing to the 50 plus families who were displaced in the fire.

At the meeting, it was also announced that the town’s Easter celebration breakfast will happen April 8, from 9 to 11 a.m., at the Secaucus High School cafeteria.
Tickets are $7 each; children under 2 years old get in free. Another Easter celebration for children 5 and under will happen 11 a.m., April 12, at the Secaucus Tot Center, located on the second floor of the Secaucus Community Center, 145 Front St.
For residents who wish to develop their green thumbs, an Earth Day cleanup will take place at the Mill Creek Marsh, April 22, from 10 am to 2 pm. The town will provide pickup sticks, bags, gloves, water, and snacks. Sneakers and boots are recommended. Residents can RSVP with Cleanup Coordinator Lynn Kramer at Lkramer@secaucus.net. For more information on the aforementioned events, contact the town at (201) 330-2000, ext 3060.
Hannington Dia can be reached at hd@hudsonreporter.com 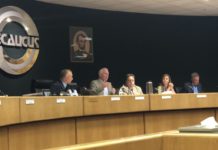 Secaucus keeps Board of Education elections in November for now