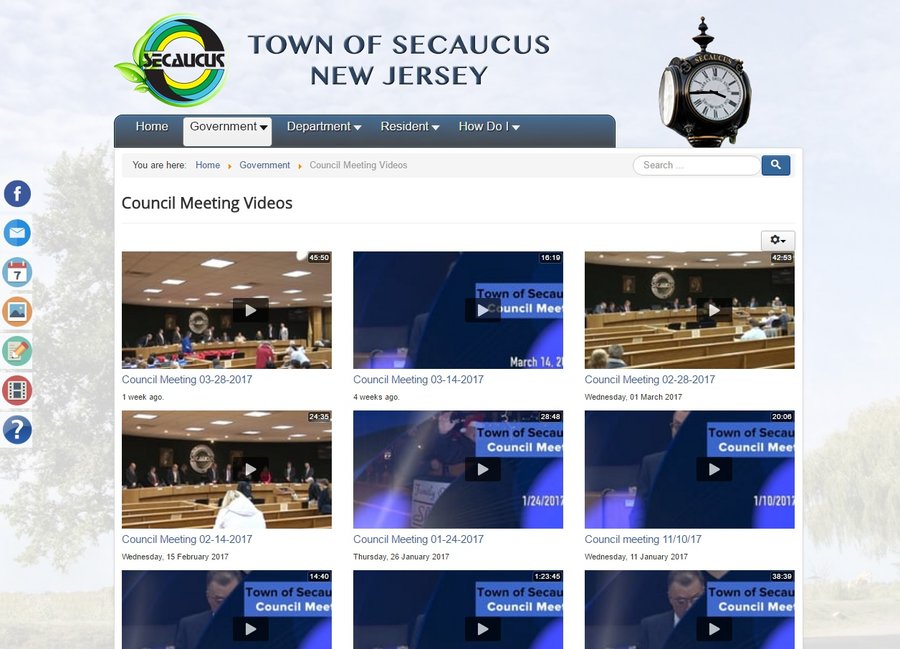 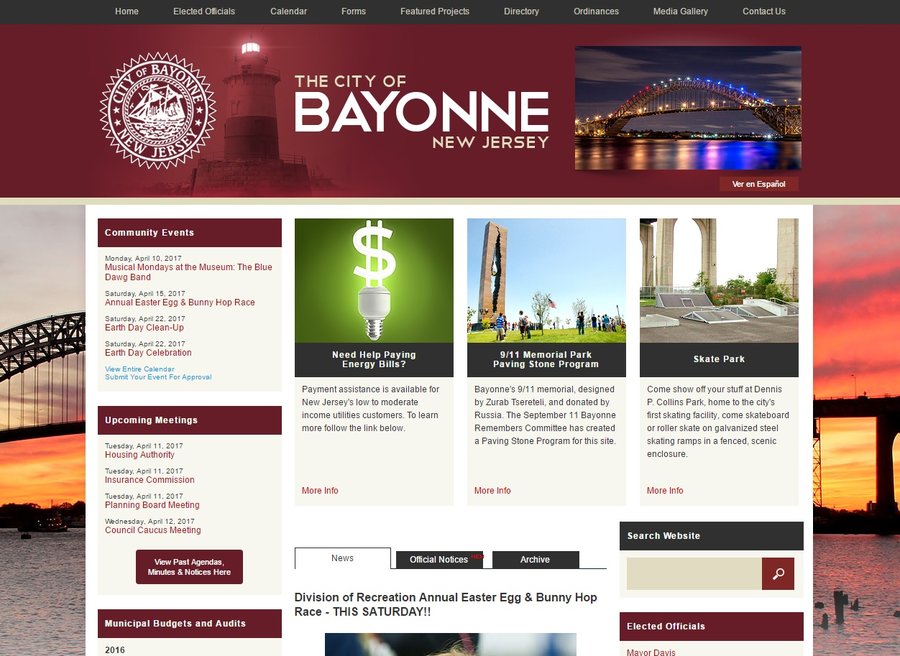 In the olden days — about 10 or 15 years ago – city websites contained only a few details, if they existed at all. Nowadays, the most computer literate residents can go to a site get public ordinances up for a vote or apply for a parking permit – that is, when they’re working.
Not all city websites are up to date, and not all provide crucial information. Below, we ranked the websites of the Hudson County municipalities covered by the Hudson Reporter, based on content, ease of navigation, and design.

Hudson County’s most northwestern town is not only accessible via its famed junction and highways, but its less well-known municipal website. Its user interface is intuitive. Tabs at the top of the page navigate to virtually any information a resident might need, which means less searching through paragraphs and separate pages to track down what you want. A short cursor slide away from the mayor’s contact information are “Financial Documents,” “Municipal Ordinance,” “Evening and Meetings Calendar,” and other content clearly laid out.
Secaucus is the only city to publish video of its City meetings to go alongside its agendas and minutes. The website is easy to navigate and has a “How Do I?” tab to answer most questions a user might have. A nifty strip of links is always fixed to the left side of the screen, so users can access video, calendars, forms, and social media from any page.
“I had the idea to put council videos up because it’s a great way to see the meetings,” said Secaucus Mayor Michael Gonnelli. “Not too many show up to the meetings, so we’re trying to create a people-friendly design.”
Before Gonnelli took office, Secaucus contracted the same webmaster as that in Union City, Bayonne, North Bergen, and Guttenberg. When Gonnelli came on board, the town contracted a local municipal website builder to record and integrate council meeting videos into the website, and then extended the contract to build and maintain the entire page.
“More important than the design is making sure you can keep it going,” said John Flanagan, of govsites.com, who manages Secaucus’s website. He integrated the “How Do I?” section a year ago after analyzing user data to find that residents were spending too much time to get to simple pages. “We’re constantly looking at the analytics, how people are getting to the site, what they’re doing on there, and to bring content more forward,” Flanagan said.
The two most important qualities for a good municipal website, according to Flanagan, are speed and accuracy. He updates Secaucus’s website daily, making sure new sections conform to the design of the rest of the site. Some older sites just tack on new pages to old website builds, resulting in a visually unimpressive and confusing web experience.
“I really believe getting everything updated the same day and emergency information out quickly makes the difference between a good municipal web and a great one,” Flanagan said.

Hoboken’s website appears the most comprehensive of all the towns, with some notable exceptions.
The website offers a lot of well-organized links for the city’s 53,000 residents. City Council meeting pages include links to resolutions and ordinances.
But the recreation section is an exception, with some information seven years old. Too many clicks are required to find what one needs to participate. – and attempts to sign up for the a traditional sport such as baseball bring a user to a scanned PDF sign-up form from 2010 that no longer works.
Many of the recreation links and pages contain photos from 2012 and old schedules. One link to Hoboken’s youth basketball program sends the user to a page with an error code reading, “4030: Ancient.”
There is a relatively new recreation page but it requires numerous clicks to find it. The city now uses a third-party company called Community Pass; the portal can be found by clicking the “Register online for Recreation programs” link in the “Residents” drop-down page. Looking instead at “Athletic Programs” brings a user astray.
Designed in 2008, Hoboken’s website has been updated many times.
“Since [2008], we have dramatically expanded the amount of information made available from a few dozen pages to nearly 400 pages of content,” said Hoboken Communications Manager Juan Melli. “We are currently in the process of finalizing a redesign of the website to better organize the large amount of content we have and make it easier to find information. Our website gets about 150,000 page views per month, but it is only one way we communicate.”
Melli touted Hoboken’s robust social media presence – more than 28,000 on Twitter and 33,800 on Facebook, “which may be the most of any municipality in the state.”
Jersey City has five times as many residents, but only 15,000 followers on Twitter.

The Jersey City’s greatest strength has been its community outreach efforts in terms of putting on events, advertising them, and getting people to show up through its Cultural Affairs office. That’s a credit to the city’s culture, but the Fulop administration seems to encourage activity and diversity as much as possible using social media, YouTube, and the city website. Council meetings are published on Jersey City TV’s YouTube account, but links do not appear in the calendar.
The largest city in Hudson County, and the second in NJ, can be expected to have a broad range of services and information on its website. Jersey City, like Union City, has a large immigrant and first-generation population that have unique needs. Jersey City is by far the best in the county when it comes to open data and transparency. Its data website (data.jerseycitynj.gov) is chockfull of interactive maps and hard datasets from various city departments and independent organizations.
It’s also the only city to have its own dedicated phone app called “Jersey City Connect,” which shows that the city is making a serious effort to connect with residents.
Jersey City packs a whole lot into an outdated website design from 2007. The great data, open government, and rich information is less valuable when residents have difficulty navigating the website.

Much of what makes a municipal website great are the web designers themselves. Bayonne, Guttenberg, North Bergen, and Union City use the same design company, Michael Melham Webmaster, which is not a bad thing. The three city’s websites are virtually identical in interface, save for color schemes and background photos.
Municipal forms and applications are easily accessible from a ribbon of links at the top of the page. Contact information and biographies for city officials are easily accessible, as well as calendars, and ordinances. The websites are wholly sufficient, but without embedded meeting video, exportable calendars, datasets, interactive maps, or better search capability, these sites come up short.

Sorry, Weehawken, but your website needs improving. A basic HTML site without mobile compatibility, a search function, or contact information for government officials falls short of the county standard. Not many links or tabs are scattered over its dark red-and- black-themed palette. Zooming in on links that are small in a black font over a red background can be hard on the eyes.
Luckily, the Township of Weehawken is small enough to get away with saving on website costs, and Mayor Richard Turner is super accessible. Everyone knows the 27-year veteran mayor. Being so small, it operates a little differently from other towns, but should be as accessible as any. As an aside, the town’s spectacular views may be distracting from screen time.

Compared to the best in the country, Hudson County municipal websites fall short of the cream of the crop. Places like Louisville, Kentucky, have simple website designs with loaded calendars, all in downloadable format, so residents do not have to manually enter each community event.
West Hartford, Connecticut, takes all the information a typical Hudson County town provides, wraps it in a prettier package, adds every town ordinance in easily searchable format, and is simply more useable than most websites, let alone municipal sites. Both cities were finalists in the Center for Digital Government’s annual Best of the Web awards in 2015.
There’s a steep learning curve as local government’s information needs evolve. Hudson County websites leave room for improvement.