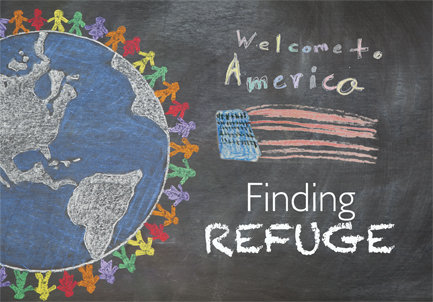 In the waiting room, a little girl digs through a bucket of toys while her parents take an ESL class nearby. Despite coming from Eritrea so recently that she is still awaiting preschool placement, she is already picking up the language. She drops a stuffed animal and exclaims, “Oh my god!” sounding like a typical Jersey girl.
The child is playing in the Journal Square office of Church World Service (CWS), a refugee resettlement program that helps displaced people from around the world find new homes and rebuild their lives. It’s an international organization founded in 1946 as a partnership of churches. Today the humanitarian group has 33 offices across the United States that welcome refugees. Its New Jersey office is in Jersey City.
Full disclosure: my husband, Maxim Ryazansky, came to the United States as a refugee in 1989 through a government program that helped Eastern European Jews emigrate during the collapse of the Soviet Union. When immigration reform became a hot topic during the 2016 presidential election, Max sought a way to get involved and give back. After reading about CWS, he decided to reach out and volunteer. “When we came here we got a lot of help from government programs,” he recalls, “but without private groups and citizens, there was no way that my family would have been established as quickly. I feel like it’s the American thing to do to help people when they are in need.”
But that wasn’t the sentiment when President Donald Trump signed an executive order, soon after his Inauguration, denying the entry of refugees to the United States from Iran, Iraq, Libya, Somalia, Sudan, Syria, and Yemen for 120 days. The order prompted lawsuits, protests, and involvement from human rights groups. It also created an air of uncertainty for CWS and its clients, including Mohammed Hameed, who arrived with his family from Iraq just before the presidential order.

Fearing for their Lives

Hameed served the U.S. Army as an interpreter for 10 years, which put his safety at risk. “Due to the nature of the type of job that I did, I got threatened by terrorists,” he says. “The militiamen, they tried to follow and track down all of the interpreters. We were called ‘eyes for the Americans.’”
He soon realized he was being targeted. “They kidnapped my brother,” he says. “They thought that he was me. It was terrible. After torturing him for a couple of days, they let him go when they realized that he was not me.” After that, he feared for his life. “I could not even leave my house,” he says.
That’s when he reached out to CWS.
“They give good help to the refugees who are here to start their lives in the United States for the first time,” he says. “Not only the organization, but the volunteers are such great people. They are making me really feel that I am at home. I don’t know how to thank them. I can’t even find the words.”
But words are one thing that Hameed has on his side. CWS selected him to attend a conference with New York Democratic Senator Charles Schumer because of his excellent English skills. Hameed was also a great example of the point that Schumer was making—that many people are at risk of death because of the immigration ban.
“This executive order is mean-spirited and un-American, and it was implemented in an incompetent way that has caused chaos and confusion across the country. It will only serve to embolden and inspire those around the globe who would do us harm,” Schumer said at the conference, where he shed a few tears that evoked a tweet-freak from President Trump. For Hameed, it was a wonderful experience. “It was something that I will never forget,” he says. “I am really, really thankful for what the senator did to stand up for the refugees and the immigrants. He stood by their case. I felt really proud to help at that conference.”

Their Own Two Feet

The Journal Square office, which opened in 2015, is small and busy. Since opening, it has served about 200 people. The waiting room is decorated with drawings made by children who have come through the program. Nearby are boxes of gently worn clothes that are yet to be sorted. CWS hopes to secure a donated storage space for items like these. The outpouring has been so great that the office can’t make space for the boxes.
On the day I visited, volunteer-run ESL classes are being held at one end of the office while a job developer is counseling newly settled refugees on the other.
“The goal of the program is self sufficiency,” says Megan Johnson, director of the Jersey City office. “We want to have people standing on their own two feet and supporting their families.”
The program lasts 30 to 90 days and allots $925 per person. CWS sets the families up with housing, helps them find employment, and provides cultural orientation. The program also helps refugees meet goals like getting social security cards and enrolling in school.
Johnson says her clients are about 50 percent Syrian, but they serve people from all over the world. She tries to list them all: “Ethiopia, Central America, Colombia, El Salvador, Honduras, Guatemala, the Middle East, Iraq, Iran, Pakistan, Sri Lanka, and China. We’ve had a lot of diversity because Jersey City is really diverse.”
Locals pull their weight. “We couldn’t do this without volunteers,” Johnson says. “People in Jersey City have been overall very receptive to helping refugees. Our services are about the bare necessities, and people need more than that of course, so we’re relying on other organizations to help us.”
CWS works with a network of churches within 50 miles that sponsor refugee families. This often includes housing that lasts longer than the 90-day deadline. It also receives help from the Islamic Society and various church and social groups.

One of the biggest struggles that CWS clients face is finding employment when they have limited language skills, though some are fluent upon arrival.
“It’s the English and the jobs,” says case manager and ESL developer Rebecca Liberato. “One plays off of the other. If we get someone coming in where they speak absolutely no English whatsoever, even unloading boxes at midnight is hard.”
Johnson adds that securing housing for refugees prior to their arrival is another hurdle. “We are asking landlords to rent to folks before they arrive in the country, and they don’t have a job or a credit history in the United States.” It can be a tough sell, but she says that all their refugees have been great tenants.
“Some of our refugees who we resettled last year help us with translation and welcoming new families.”

During the week I visited, Liberato looked for temporary housing for a refugee family in an Airbnb rental when their apartment fell through. Next on the agenda, she secured more permanent housing for the family.
“A lot of people look at it as, ‘oh you’re doing such good work,’ but some days you feel defeated,” Liberato says. “We can have days that we feel like we want to give up, but we get a lot of positive feedback from the clients and from the volunteers.”
She will also work on readying an apartment for a new family. This includes making repairs, cleaning, sourcing furniture and home items, and managing volunteers who help CWS turn the space into a home. “You have to be very creative and as we put it, kind of scrappy,” Liberato says. After that she will drive her own car to pick up the arriving family and bring them to Jersey City.
Why is she involved? “I started because of how badly the Syrian refugee crisis affected the children, and other refugee crises as well,” says Liberato. “I have a son. It hit home. We are so proud of those who are thriving. We feel a sense of accomplishment with them.”
Johnson, who has a Masters of Public Health in Humanitarian Crises from Columbia University, was inspired to get into her field when she was young. “My feeling has always been that I am very lucky to have been born in the situation that I was born in,” she says, “and I always wanted to help people who got something else thrown at them that to me is unimaginable.”

Thanks to CWS, Hameed and his family have been adjusting well during the short time that they have been here in the United States. They are settling into their new apartment in Hudson County; Hameed is looking for a job, where he can use his language skills.
New Jersey Gov. Chris Christie withdrew the state from participation in the U.S. Refugee Resettlement Program, so CWS works under contract with the federal government. In the final presidential debate, candidate Trump referred to Syrian refugees as a threat to U.S. security, calling them “Trojan horses.” Now that he is president, he could bring changes to CWS. “Everyone is thinking about it, but we don’t know; we’re waiting and seeing,” says Johnson, who expected to settle 170 refugees this year.
No one should feel nervous about welcoming them into the community if they come. “All of our folks go through very intensive background checks from the U.S. government, from the State Department,” she says. “They have security screenings, medical screenings, they’ve been vetted and interviewed for a very long time.”
CWS did not close its doors during the ban, but its future remains uncertain. For refuges like Hameed, it was a life saver. He says, “A lot of people the first time leaving their homeland can have an emotional moment, but it has been really great.”—JCM

Ranked choice voting could come to Hoboken, but hurdles remain