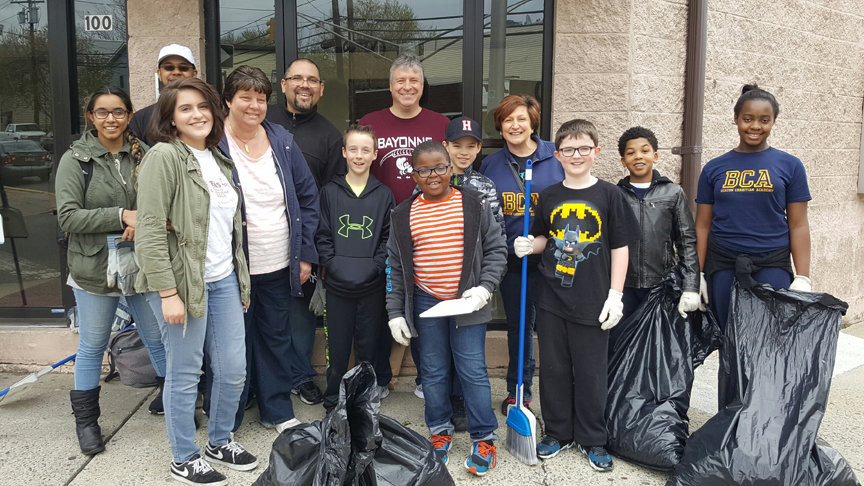 Residents of Bayonne came together on Saturday, April 22 for Earth Day celebrations, where more than 700 residents banded together to clean up more than 14,000 pounds of trash. For two hours, 60 volunteer cleanup crews of children and adults alike staked out various locations across the city, cleaning and beautifying their respective areas.
Alicia Losonczy of the Division of Planning and Zoning was responsible for much of the organizing. “How terrific it was that it was received with such excitement,” said Losonczy. “Children participating did a great job and the feedback was amazing.” She said the city is considering organizing another citywide cleanup day in the fall.

The NJ Department of Education (DOE) denied the Bayonne Board of Education’s (BBOED) $133,150,503 tentative budget, passed in March, according to Board President Joseph Broderick. The 3.95 percent tax levy included in the tentative budget was deemed insufficient for the DOE, which approves budgets based on the district’s ability to provide all its students an opportunity to achieve the knowledge and skills defined by the state’s Student Learning Standards. The DOE requested the BBOED use its full bank cap of roughly 5.95 percent to make up for the budget shortfall, a much larger tax levy than what the board originally proposed.
The DOE also requested changes to the district’s use of $3.7 million in Regular Operating District (ROD) grant funds, which they voted on in December to use to fill the operating deficit. The board hopes the ROD grant issue can be resolved by working with the state.
“If the ROD grant doesn’t go through, of course you have to look at another way to make up this massive amount of money,” said Broderick, alluding to the board possibly having to make more layoffs than its plan proposed. The board’s biggest concern remains maintaining the Bayonne School District’s quality of education. “Now we’re getting to the point of being able to truly provide a fair and thorough education,” Broderick said. “What are we here for in the first place? To educate the children and give them the best possible education.”
Bayonne Schools Superintendent Patricia McGeehan will meet with NJ Commissioner of Education Kimberly Harrington and Assembly Speaker Vincent Prieto, on Thursday to discuss budget solutions. The next BBOED meeting is Wednesday, April 26 at 7:30 p.m. at the Bayonne High School Auditorium. The board will not discuss the budget until a special meeting on May 8.

A former BHS student was awarded $375,000 in a lawsuit with the school district last week. Abanob Hakim was assaulted on his way home from school in 2013 and suffered debilitating injuries as a result. At Wednesday’s BBOED meeting, the board is expected to approve the settlement agreement, which would be paid for by the NJ Schools Insurance Group and Summit Risk, according to the meeting agenda.
Hakim claims in the lawsuit that the Bayonne school district did not adequately protect Egyptian students despite its awareness of “tensions, fights, harassment, bullying and injuries.” The suit, which names Superintendent Patricia McGeehan, former Assistant Superintendent Robert Craig, BHS Principal Richard Baccarella, and Business Administrator Leo Smith, said the district did not “follow generally accepted measures to implement procedures to eliminate that danger” or, “confront those who were creating the danger and remove them from the school.”

A website called PR Buzz recently published a fake press release purporting to represent the City of Bayonne and misinforming readers that Police Chief Drew Niekrasz is planning to resign. In a statement on its website, the City of Bayonne said it “did not write, authorize, or issue that document. This purported press release appears to be a statement from someone with an axe to grind.”
The City of Bayonne requested that PR Buzz remove the page and said it is investigating the release’s source. In a letter sent to PR Buzz, City Law Director John Coffey II called the press release “libelous,” “slanderous,” “a work of fiction,” “poorly written,” and in violation of the website’s own Terms and Conditions Agreement, and therefore should be removed.
As of April 25, that press release was removed from PR Buzz, but questions remain as to the source of the misinformation.