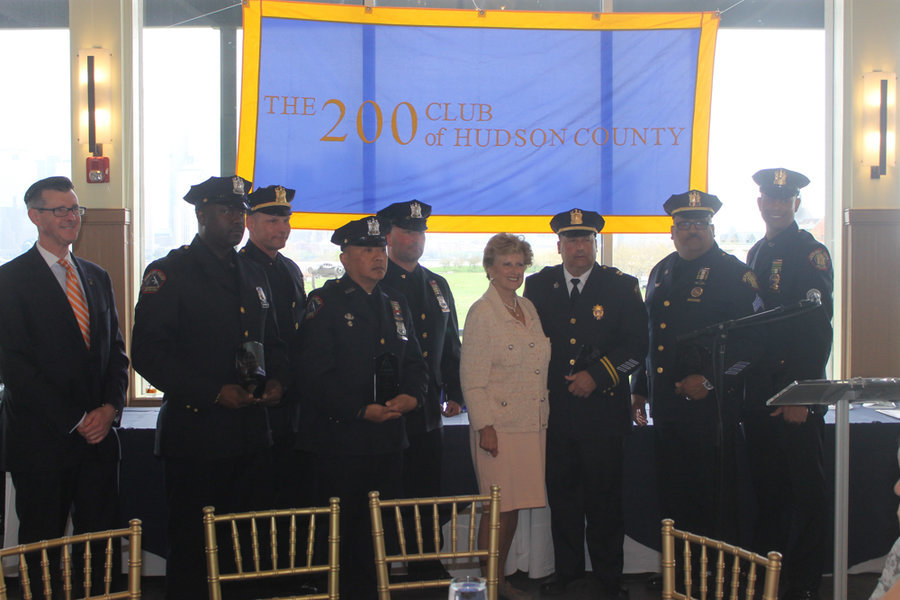 When Hoboken police received the first report on Sept. 29, 2016, they were told that a Hudson Bergen Light Rail train had struck a vehicle near the crossing at Paterson Plank Road. That was erroneous, and they soon learned the actual disaster was even worse. An incoming New Jersey Transit train loaded with commuters had failed to stop in the terminal in Hoboken, crashing into its barrier, cracking the terminal supports, causing the roof to collapse, seriously injuring many train passengers, and killing a woman standing at the platform. Seven Hoboken police officers were first to respond. Although trained to deal with any situation, said Hoboken Police Chief Ken Ferrante, these officers began what became a large and intense rescue effort that would eventually involve hundreds of public safety workers who came to help deal with the terrified and injured passengers and bystanders and dazed railroad personnel. In a special award ceremony on April 26, the Hudson County 200 Club honored the united command structure that responded to what became an international story, with Chief Ferrante highlighting the efforts of those seven Hoboken policemen: officers Mark Aurigemma, Benardo Manoz, and Detectives Dave DiMartino, William Collins, Rob Roman, Vito Gigante and Bret Globke. Click here for more.

Hoboken residents will elect a mayor and three at- large council members this coming November. Elections in the mile-square city typically do not fall along Democrat/Republican lines, but among supporters of the incumbent, and the loyal opposition. And they generally get pretty heated. This year’s election gossip is off to an early start as rumors have swirled about who will oppose Mayor Dawn Zimmer, who has held the office of mayor since 2009. Zimmer said in March of 2016 that she will run for mayor again. The deadline to file with the city clerk to run for a mayor or council position is Sept. 5. Candidates must have lived in town at least a year to run. The City Council has nine seats, six of which represent specific wards, and three of which represent the whole town. It’s the latter that are up this year; the six ward seats are up for election in 2019. The mayor currently earns $116,950 with benefits. Most council members earn $24,130 and the council president earns $26,541. Click here for more.

Forget Punxsutawney Phil and Groundhog Day. Residents of Hudson County know that spring arrives when the annual Taste of Weehawken culinary fundraiser lights up Lincoln Harbor. This year’s event on Tuesday, May 2 will feature 30 of the best restaurants, caterers, and bakeries spanning North Hudson and the Gold Coast, each showcasing some of their signature dishes to raise money for the Weehawken library. “That’s the largest number we’ve ever had and it’s a tremendous variety of food,” said Weehawken Mayor Richard Turner at a press conference at the library on April 25. “I’ve been to other Taste events and this one just feels so warm to me,” said Alex Gulino, marketing director of Houlihan’s, one of a handful of restaurants that have participated in the event since the inception 17 years ago. “I really feel like this is a community event. You’re hanging out with your neighbor, your girlfriend down the block, and everybody’s just there to have a good time and try some new stuff. It’s like a big block party and everybody’s invited. I love it.” Click here for more.