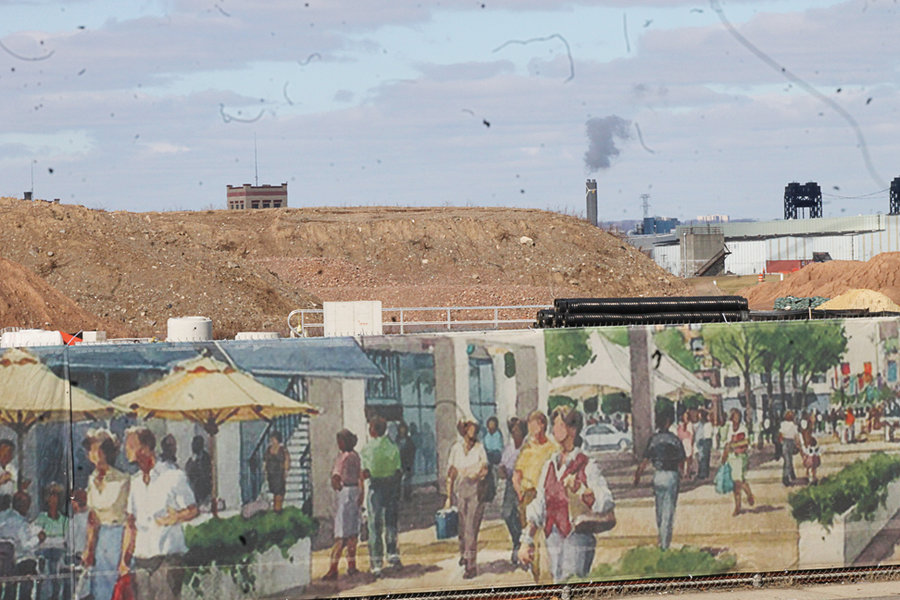 In what appears to be a response to an attempt by the city to find a new developer for a 90-acre site along the Hackensack River near Route 440, Kushner Companies has announced it will longer seek to become the developer. In another part of the city, Mayor Steven Fulop said he would not support a tax abatement for another Kushner project in Journal Square.
The Bayfront project, a joint effort between Jersey City and Honeywell Corporation, is expected to create a new Gold Coast along a former contaminated site just north of Society Hill.
The site, which was contaminated with chromium, has become a model for environmental cleanup. But city officials and others involved with the project said they were not comfortable with the vision Kushner had for the site.
Kushner was proposing to develop the site as a closed community that would allow an Orthodox Jewish community to relocate to Jersey City from Brooklyn. But local officials along with Honeywell had envisioned the site as a potential new Gold Coast similar to Newport that would generate the next level of redevelopment for former industrial sites along Route 440.
With the proposed extension of the Hudson Bergen Light Rail from its terminus on West Side Avenue to Route 440, the project will double in size from 4,000 residential units and significant commercial space to more than 8,000. Combined with Society Hill and other development that has already taken place in the area, the project has the potential to make the Hackensack River an attractive site for additional development, competing with some of the development ongoing at former industrial sites in Harrison and Kearny.
Although the company, owned by relatives of Jared Kushner, announced it would be pulling out of the project, local officials said the city was already seeking a new developer more in line with the city’s vision for an open community.
Kushner is one of a number of bidders on the site, so the project will likely move ahead once the city finds a developer more in-tune with its vision for the site. Although Kushner officials announced the withdrawal, city officials were already leaning towards other development proposals, officials said.
The Kushner proposal which offered the city about $125 million for the property is similar to one that was recently rejected in Bayonne for a portion of the former Military Ocean Terminal.

This withdrawal comes at a time of escalating political pressure on the city to cease doing business with Jared Kushner’s family company, as he is the son-in-law of Donald Trump.
The company became the focus of local and national attention when Jared’s sister attempted to use a well-established but controversial visa program to help fund the $820 million cost for developing One Journal Square.
This is a long anticipated centerpiece of Journal Square redevelopment and one of the key issues of the 2013 municipal election in which Fulop promised to restart stalled development in Journal Square.
Although Kushner has been involved in other projects in Jersey City, One Journal Square also sought a tax abatement from the city to construct two towers that included about 1,500 residential units.
Seeking to solicit Chinese investment in the project, Kushner’s sister apparently used Jared’s name in offering to allow the investors to take advantage of federal program that gave a visa to investors that created jobs as a result of projects in the United States.
Jared, however, stepped down at the chief executive officer for Kushner Companies when he took up a post in the Trump administration in January.
Nevertheless, he has become the focus of local anti-Trump protestors seeking to get the city to cease doing business with the company.
In a statement issued on his Facebook page, Fulop said he would not support the 30-year tax abatement Kushner Companies has requested.
“I want to be clear with residents on where the city stands here. Last week, the developer of this project submitted an application to Jersey City for a tax subsidy and abatement on this property. The administration made clear to the applicant that the city is not supportive of their request and while the law requires a first reading ordinance vote if they submit an application, I don’t foresee the council voting in favor. I know for certain I have made my feelings clear here on this project and what I feel works best for Jersey City. This tax abatement application doesn’t work for us,” Fulop said.

Why the city objects to the Journal Square One abatement

Those close to the Fulop Administration tried to clarify some of the thinking behind the decision, saying that the administration has tried to make its policies less political and more transparent.
First, there is an abatement map that was published along with a policy which means that everyone has an equal opportunity to get an abatement regardless of who you are or what mayoral candidate you supported.
City officials are skeptical of Kushner’s claim to have divested from the company and said if he had, the abatement would have been considered.
“Kushner basically divested in name only. It wasn’t moved to a blind trust. The name of the company wasn’t changed. It’s still being run by someone in his family, a sibling. It’s too close,” an official said.
In published reports, however, Jared Kushner said he has put his interests in a blind trust and does not have a working relationship with the company and its various projects.
In another argument against awarding the abatement, city officials claim, the project doesn’t align with Jersey City’s goal of being less political and more transparent when a Jared’s sister was reported to have said in a presentation, “the family will be very happy if you do this.”
Those close to the issue in the city believe this all becomes problematic since Jared is the person who is responsible in the administration for China policy.
This is the logic behind the rejection, according to those close to Fulop, saying that people inside the Trump administration should not be allowed to capitalize so directly on government service.
It is one thing to make contact in government and later used them for business, a common practice, and quite another for a person to be steering business to private firm while in government service.
_____________
“I’m sick of seeing this vacant lot for almost 15 or more years, four different owners.” – Richard Boggiano
____________
The EB5 program – which is what Jared’s sister hoped to use to entice investors to the Journal Square project – is largely seen as a way for wealthy foreign nationals to buy green cards, while Jersey City has instituted policies that would protect poorer immigrants. Local officials say they would rather help poor immigrants and refugees get green cards than become a conduit for wealthy people to do so.
But “this is an old policy that has nothing to do with Trump or Kushner and it’s how tons of stuff has been financed in the U.S.,” one official said.
Councilman Richard Boggiano, who represents the Journal Square area, said he disagreed with Fulop on this.
“I could care less about the politics or where the money came from – Mars, Venus or whatever,” he said. “This is a $1 billion project with quality stores, restaurants and a park and a World War II monument, hundreds of jobs and a few thousand construction jobs. I’m sick of seeing this vacant lot for almost 15 or more years, four different owners. I want to see Journal Square done, and the Loews also. Let’s cut out the election year politics.”
Some key players involved with the project said Kushner Companies will likely push ahead with more EB5 funding to complete the project anyway. But without the abatement, Kushner’s costs will actually be reduced because the project will not require the use of union labor and will not require give back to the city that would be required under an abatement.
Al Sullivan may be reached at asullivan@hudsonreporter.com.