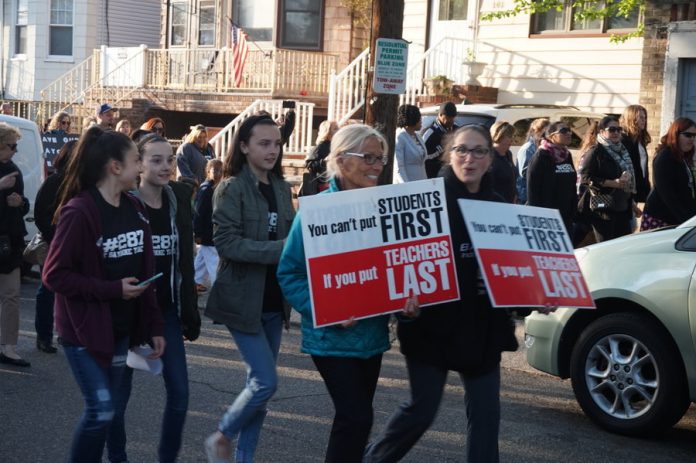 The Bayonne Board of Education passed a $127 million budget at a special meeting on May 8, which allows them to keep 88 of 287 teachers they planned to lay off. The budget also requires a 5.6 percent increase in the levy, or the amount of the budget to be funded by property taxes. The rest is funded largely by government aid. The special meeting was called after the Department of Education rejected the district’s previous budget, passed in March, which included a smaller tax levy and the use of funds from the district’s capital reserves. Students and teachers, still reckoning with the potential consequences of a district losing a quarter of its faculty, planned a protest before the meeting, wearing black t-shirts emblazoned with a hashtag for the number of teachers laid off in April — 287. Parents are primarily concerned that their children’s education will suffer with larger class sizes, limited resources, and the loss of trusted teachers. Click here for more.

The revitalization of Broadway is underway, and its largest addition, a three-story, 80,000- square-foot medical facility on 24th Street,owned and operated by the nonprofit RWJ Barnabas Health,is due to open in June. The block-wide outpatient medical center, to be called “Barnabas Health at Bayonne,” is expected to feature an imaging center, retail pharmacy, pediatric center, primary care services, women’s health, physical therapy, laboratory drawing station, and emergency services, according to RWJ Barnabas. The facility will also have a parking garage between 24th and 25th Streets across from an ambulance-ready rear entrance. City officials expect the project to bring jobs, commuters, and commerce to the neighborhood, which recently saw the groundbreaking of two large residential apartment complexes near the 22nd Street Light Rail station. With new visitors and residents, the city expects more commerce to follow. Click here for more.

New Jersey Transit held two public hearings on the planned Hudson-Bergen Light Rail extension into Bergen County on April 24. The project would add seven new stops to the existing service, all north along a 10-mile CSX railroad right of way, between 91st Street in North Bergen and Englewood Hospital and Medical Center. (Separately, the system also plans to add a stop in Jersey City off Route 440 near a proposed massive development.) The system currently has 24 stations in Hudson County, through North Bergen, Union City, West New York, Weehawken, Hoboken, Jersey City, and Bayonne. Officials and residents convened on April 24 at the Crowne Plaza Englewood Hotel to give their thoughts on the Supplemental Draft Environmental Impact Statement, an overview of the seven-stop addition. The stops won’t be built any time soon. NJ Transit estimates they would open at the earliest in 2029. Click here for more.