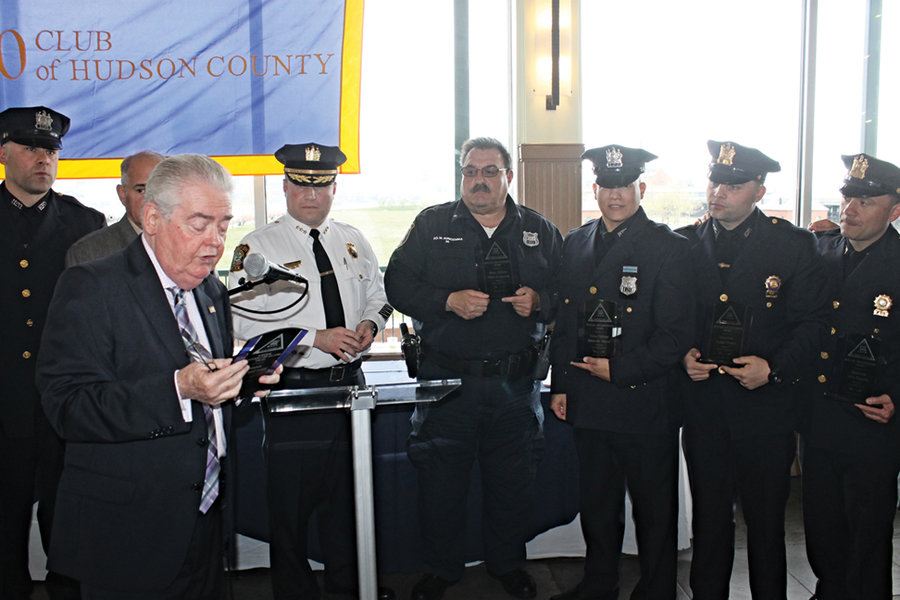 When Hoboken police received the first report on Sept. 29, 2016, they were told that a Hudson Bergen Light Rail train had struck a vehicle near the crossing at Paterson Plank Road.
They soon learned it was worse — an incoming New Jersey Transit train loaded with commuters had failed to stop in the terminal in Hoboken, cracking the terminal supports, causing the roof to collapse, serious injuring many train passengers, and killing a woman standing at the platform.
Although Hoboken firefighters and EMS were soon on the scene, shortly joined by New Jersey Transit Police and other emergency personnel, seven Hoboken police officers were first to respond and dealt with the chaos in the aftermath of the crash.
Although trained to deal with any situation, said Hoboken Police Chief Ken Ferrante, these officers began what became a large and intense rescue effort that would eventually involve hundreds of public safety workers.
In a special awards ceremony on April 26, the Hudson County 200 Club honored the united command structure that responded to what became an international story, with Chief Ferrante highlighting the efforts of those seven Hoboken policemen: officers Mark Aurigemma and Benardo Manoz, and Detectives Dave DiMartino, William Collins, Rob Roman, Vito Gigante, and Bret Globke.

Being a cop, firefighter, or emergency medical technician is never easy. But according to Joan Quigley, things are worse now.
“We here in the Hudson County 200 Club recognize what public safety people do every day,” she said.
While men and woman who work in public safety perform deeds that are noteworthy on a regular basis, she said, the Valor Awards recognize some of the most significant events. The ceremony at the 33rd annual luncheon of the Hudson County 200 Club awards luncheon at Liberty House in Jersey City highlighted some of the more heroic moments.
Each year, the Valor Committee sends out requests for nominations to police and fire chiefs, directors in each municipality, and state and county officials.
The club will also present scholarships to the winners of its contest and other contests sponsored by law enforcement associations to aid young people who are going to college.

Each year, the club pays tribute to groups that work together as a team to solve some public safety issue. This year, this included police from Hoboken, Jersey City, and Bayonne.
For the first time, the club awarded a Valiant Teamwork Award to a non-governmental police force, honoring Capt. Thomas Maggi, Sergeant George Martinez and Police Officer Timothy Legowski of the Stevens Institute of Technology Police Department, for actions taken in response to a Washington Street fire in Hoboken.
Legowski, while on patrol, smelled smoke and then saw flames shooting out of the building. After notifying Maggi and Martinez, he ran into the burning building, banging on doors and shouting to alert sleeping students when the interior fire alarms failed to go off. Maggi and Martinez helped activate the system and brought the fire department to the scene.
Legowski, born and raised in Jersey City, has been a cop since 2015. Maggi is a former resident of West New York. Martinez is currently a resident of Bayonne.
Also receiving a teamwork award were Bayonne Police Officers Christopher Denobel, Joseph Kowalski and Vincent Mattielli, who responded to a fire scene on Broadway in Bayonne and helped to rescue a disabled man from a smoke-filled bedroom as well as a confused toddler wandering around the first floor.
Also receiving teamwork awards were officers from the Jersey City Police Department, who responded to a hostage situation on Bergen Avenue and managed to resolve the situation without violence. Those honored were Capt. Michael Kelly, Sergeants Juan Bonet and Joseph French, Detective Michael Camacho, and police officers John Boamah, Emilio Ramos, Michael Spolizino and Lou Vega.

The valor award highlights the achievements of individuals. This year, police officers from Jersey City and New Jersey Transit as well as the Jersey City Fire Department received these awards.
Jersey City Police Office Ameer M. Alateek was honored for safely resolving a carjacking that had the potential to turn violent in March of 2016. Police officers Miguel Ramirez Jr. and Juan Rivera, Jr. were recognized for dealing with a car theft that turned violent in early January 2016.
New Jersey Transit Police Officer Victor Ortiz handled a confrontation with an unruly and potentially suicidal passenger he had to rescue from in front of a light rail train.
Also receiving a valor award was Jersey City firefighter, Luis Colon III. While conducting a fire inspection, he noticed smoke coming from a three story building. A three year old girl was sleeping in an upstairs bedroom. To rescue her, he had to use a ladder to get to a balcony, then brought the ladder up, and climbed it from the balcony to a third floor window. He then went through a smoke and fire-filled house, found the girl, and left the building the same way he went up, carrying her on his back.

The club was established in 1984 and is one of 15 clubs statewide which acknowledge the achievements of law enforcement officers, firefighters, and emergency medical technicians for heroic acts that go beyond the call of duty.
The club also plays another very important role in the lives of public safety workers and first responders. If someone dies in the line of duty, a club provides money for the family to get through the grieving period, providing them with whatever they need. One police widow had very little money in the family account when her husband died.
“We give thousands with no strings attached,” said past president Mickey McCabe. “These deaths are always unexpected, and they pose a significant burden on the families.”