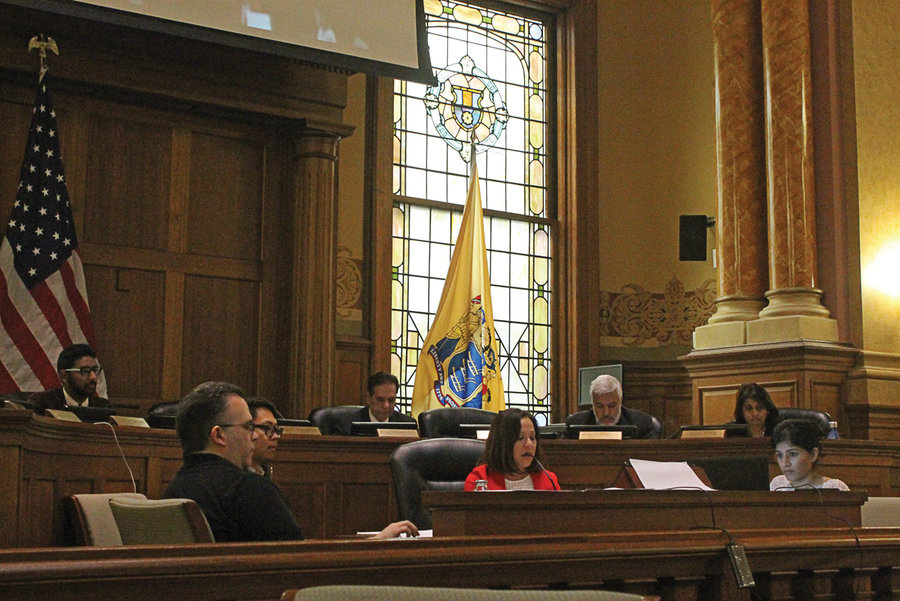 Taking the first steps to discharge their new and likely significant responsibilities, the Jersey City Immigrant Affairs Commission reviewed and gave its blessing to the new city identification program at their inaugural meeting on May 15. Their action enables an ordinance creating the program to be reintroduced at the May 24 City Council meeting for possible final passage in June.
After naming Imtiaz A. Syed as chairman and Mussab Ali as vice chair, the commission examined a slightly modified version of the city’s proposed identification program. The city council tabled a first attempt at the ordinance last month to settle some unresolved issues about the program.
The nine-member commission was founded early this year to advise the city on immigration issues. It followed threats from President Donald Trump to withhold federal funding from cities like Jersey City that have declared themselves to be sanctuary cities and refuse to assist federal efforts to deport or detain immigrants without benefit of warrants and other protections offered to American citizens by the U.S. Constitution.
Among the nine member board are Juan Cartagena, president and general counsel of civil rights legal advocacy group LatinoJustice PRLDEF; Ahmed Yehya Shadeed, president of the Islamic Center of Jersey City; and Hamel Vyes, an immigration attorney.
Other members include Elvin Dominci, Rosa Santana, and Cecilia Aranzamendez, as well as City Council President Rolando Lavarro, Jr.
Nearly 40 percent of the city’s population is foreign born. Estimates vary on how many undocumented immigrants also reside here, though the most commonly accepted figure is about 22,000 in a city of 262,146, according to the last census.
_____________
“You can’t board an airplane, operate a motor vehicle or obtain a driver’s license or prove U.S. Citizenship or immigration status.” – Pam Andres
____________
This commission is the first of its kind in the state and would provide guidance to the city and the council on issues such as human rights, social services, education and business, all of which impact the lives of immigrants.

The City Council tabled the ordinance last month because some questions were unanswered about what proofs would be needed to obtain a city identification card.
Although touted by some as a municipal program designed to help residents who may be in the United States illegally, a city I.D. would be limited in scope, according to Pam Andres, chairperson of the City’s Office on Welcoming Communities which oversees the card program.
“You can’t board an airplane, operate a motor vehicle or obtain a driver’s license or prove U.S. citizenship or immigration status,” she said.
If adopted in its current state, the card would allow residents of Jersey City to access city resources across a number of departments, such as recreational programs that require proof of residency.
More importantly, the card – which can only be used for identification in Jersey City – serves as legal identification when interacting with Jersey City police. It would also serve as identification to allow people access to public buildings, libraries, and schools.
City officials are hoping to expand the program through an agreement with a local bank that would allow cardholders to open an account and cash checks. The city is also negotiating with local businesses for the card to serve as a discount card.
More importantly, the card could help immigrants avoid being detained by federal authorities. Anyone without proof of identification can be detained until such proof is provided, under current federal immigrant policies.
If passed, Jersey City would join Union City and Newark in offering an ID program.
“The program would be more inclusive than those programs,” Andres said, noting that the card program has a potential to help all Jersey City residents, and especially undocumented immigrants, people who cannot get a driver’s license, transgender people, and the homeless.

When tabling the ordinance last month, some council members raised concerns about the six point system of proof residents would need to provide to obtain the card, and about vague language in the measure.
While the city would keep no records on file for those who apply, people seeking the card would be required to provide two layers of proof – a four-point system as to prove residency, and a two-point system as to who that person is.
Some of these details were corrected in the new ordinance and will require the reintroduction on May 24.
Still undetermined will be how much weight the city would give to each document submitted.
“That will be resolved later,” Andres said.
The program will be open to people over 14 years old with a two-tier pricing, a cost that would provide discounts for those under 18, senior citizens, disabled or veterans, and could be waived entirely if they are homeless or can prove other financial hardships.
“This program can also allow people to carry this card instead of other less easily replaced identification such as a passport,” Andres said.
Al Sullivan may be reached at asullivan@hudsonreporter.com.