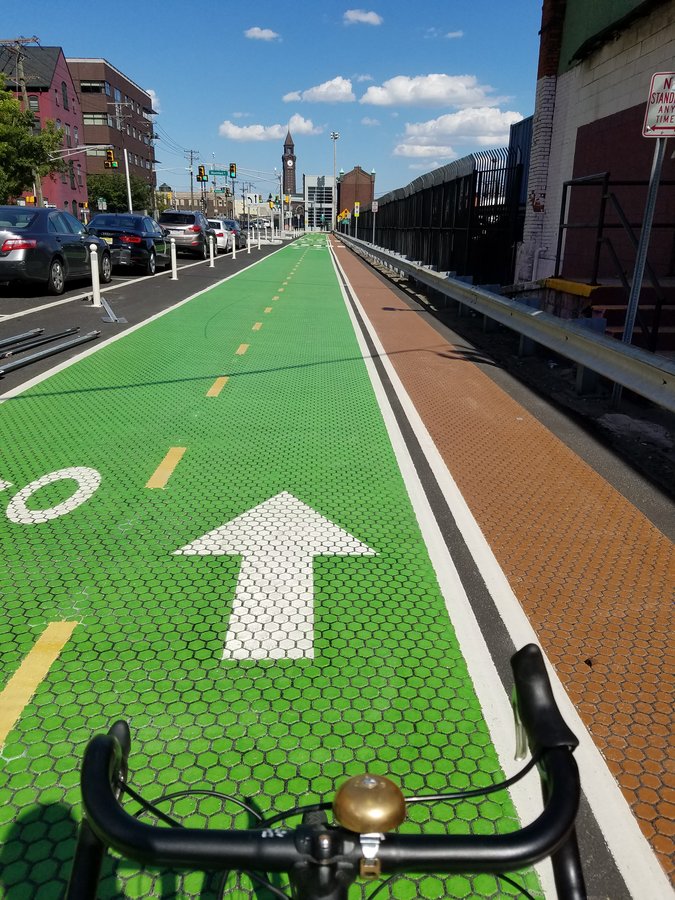 Bike JC, a nonprofit organization that promotes bike-friendly streets, is hosting its annual Ward Tour, which will conclude with a party at the Newark Avenue Pedestrian Plaza.
Registration is open for the Jersey City Ward Tour & Festival, slated for June 4. The 15-mile tour, which is in its eighth year, will touch all six wards of Jersey City, and organizers are expecting about 2,000 riders to participate.
The tour is presented in partnership with Jersey City Mayor Steven M. Fulop, the Jersey City Municipal Council, and the Office of Cultural Affairs.
The tour starts on a Sunday morning at 11 a.m. on Montgomery Street and Grove Street, next to City Hall (280 Grove St.). Protected by rolling street closures implemented by Jersey City police, riders will make a clockwise loop around the city, at a manageable pace (10 mph at the front) with several rest breaks, and finish on the pedestrian plaza between 1 and 1:30 p.m.
The following Finish Line Festival will continue all afternoon until 5 p.m., and will feature live music, food and drink, an expo with community/nonprofit organizations, and more.
Bike JC is also setting up discounts for riders at cafés and restaurants surrounding the City Hall start. The Sirelo Entertainment community drum circle will again warm up and send off the riders at the start (all are welcome to participate with their own percussion instruments).
Registration for the tour is required and is free at bikejc.org, with a $5 suggested donation to Bike JC. Riders must be age 12 or older, and must wear helmets. Younger children may be carried securely on an adult’s bike. This year the tour is rain or shine.
“We couldn’t do it without the city’s help,” said Bike JC President Patrick Conlon. “Of course, that’s also true of our larger goals: Creating a network of protected bike lanes around the city, and enabling more, and better, and safer cycling here.”

A legal complaint filed in April against the City of Bayonne for violating a local residency ordinance was dropped on May 23, according to a letter sent by Mike Morris, who filed the complaint, to the Superior Court of Hudson County Clerk.
The legal complaint, filed by Morris, a community activist, and Peter Cresci, former business administrator, claimed at least nine municipal employees are in violation of the residency ordinance, and asked that the employees be either terminated or be required to move to Bayonne.
In his handwritten note, Morris requested the court drop the suit “with prejudice,” meaning he cannot file another case of the same claim. Morris co-plaintiff, Peter Cresci, however, can still keep the case alive if he chooses to file again. Cresci, whowas temporarily suspended from practicing law in November, can take up the issue again by filing “pro-se” as he did in the first complaint, meaning he represents himself without hiring a lawyer.

Eleven Hudson County municipalities have been awarded Local Aid and Economic Development grants from the NJDepartment of Transportation as part of $78.5 million distributed to 373 municipalities across the state. The grants are for various roadway improvements and to help facilitate and assist transportation projects. The county’s share of the total grant funds are determined by population and geographic length. The NJDOT gives some preference to municipalities that adopt Complete Streets policies as part of their transportation plans, and considers past performance of projects completed efficiently and on time.
Jersey City received $470,000; Hoboken and Harrison each received $330,000; West New York, $315,000; Bayonne, $314,687; and North Bergen, $310,000. Kearny received290,000, while Weehawken, Union City, Secaucus, and Guttenberg each received $290,000.
Bayonne received funding for the repaving of various streets, including West 54th Street, West 31st Street, West 25th Street, and Avenue E between 12th and 16th Streets.

The 2015-2019 amended capital plan for the MTA has included $4 million to study a much-discussed light rail on Staten Island’s west shore. The potential 13-mile route would take commuters from Richmond Valley to Elm Park and over the Bayonne Bridge connecting to the Hudson-Bergen Light Rail at 8th Street. The “Raise the Roadway Project” also includes infrastructure improvements to the bridge that would accommodate the light rail.
The MTA committed to studying the proposal last year, but only now is putting its money where its mouth is with the newly amended capital plan.
Two studies were previously conducted, the last in 2009 to gauge the idea’s feasibility. The Staten Island Economic Development Corporation (SIEDC) and local officials have long supported the idea. Like many infrastructure projects envisioned long ago, the financial crisis in 2008 severely delayed them. The SIEDC has been promoting public transit recently by holding a design contest for a conceptual gondola to carry passengers across the Kill Van Kull. The winner of that contest was Leitner-Poma, the same company that designed Bayonne’s wind turbine.

The Triple Five Group of Cos. has announced it has obtained the $1.67 billion private construction financing it needs to continue construction of the American Dream project in the Meadowlands, according to local media.
“We are pleased to have worked with JP Morgan and Goldman Sachs on the financing for this transformational project,” Don Ghermezian, CEO and president of American Dream, said. “The construction loan paves the way for the completion of American Dream and allows us to aggressively move forward with the construction and opening of the project.”
The firm had previously scheduled completion for fall 2018. Triple Five said American Dream is now slated to open in March 2019.
Despite the stopping of construction, American Dream continued its leasing efforts. Kidzania, DreamWorks Water Park, Nickelodeon Universe Theme Park, Cinemex, and Legoland Discovery Center have already signed up to be a part of the 3-million-square-foot project.
Triple Five also owns Mall of America in Minnesota and Edmonton Mall in Canada.

Mayor James Davis and members of the Bayonne City Council, and the Bayonne Chamber of Commerce cut the ribbon at the grand opening of the Philly Pretzel Factory on 715 Broadway between 33rd and 32nd Streets.
Owners Tom and Tracee Mangine, along with family members and staff, said they look forward to serving customers on Broadway. Check Facebook for deals and information.