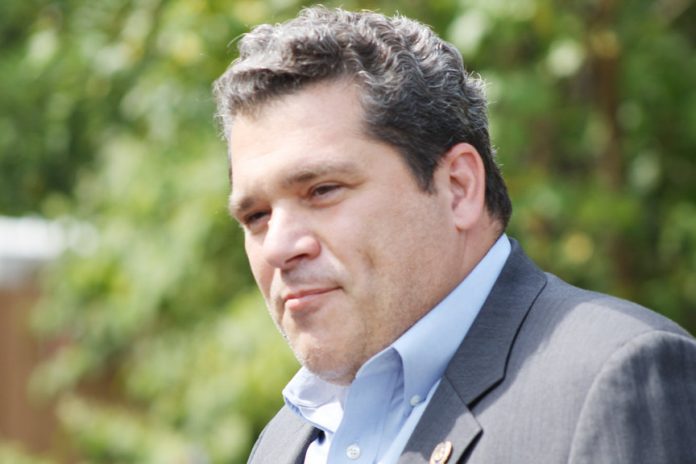 The Jersey City Education Association (JCEA) has rescinded its endorsement of Assemblyman Nicholas Chiaravalloti, who is seeking a second term in the state Assembly representing the 31st District encompassing Bayonne and parts of Jersey City. The Democratic primary election will be held on June 6 and the general election is on Nov. 8.
Organizations rarely rescind endorsements. But the JCEA, a teachers’ union that has also endorsed Kristen Zadroga-Hart for Assembly, made the decision after they linked a pro-school voucher program to Chiaravalloti. Recently, Better Education 4 NJ Kids, a political action committee that supports public school privatization and voucher programs, distributed literature throughout Bayonne and Jersey City that included pictures of Chiaravalloti and his Hudson County Democratic Organization-backed running mate, Assemblywoman Angela McKnight.

“It’s surprising to see the Jersey City Education Association break with their state organization in this way, but that will not deter me from doing what’s right and fighting for public education.” – Nicholas Chiaravalloti
____________

Zadroga-Hart is running on a ticket challenging the HCDO-backed candidates. The inclusion of their images with this literature implied that Chiaravalloti and McKnight are sympathetic to public-school privatization and voucher programs. However, they have never publicly endorsed this position.
“On behalf of the JCEA PAC and our 4,000 members, I am officially rescinding our endorsement and support of Nick Chiaravalloti, due to his apparent collusion with an anti-labor independent expenditure that is now working on his behalf,” said JCEA President Ron Greco in the press release.
“I have been endorsed by the New Jersey Education Association (NJEA) because I am a strong ally on all the issues that are important to teachers, like fully funding our public schools and pension system and getting rid of high stakes standardized testing requirements,” Chiaravalloti said. “It’s surprising to see the Jersey City Education Association break with their state organization in this way, but that will not deter me from doing what’s right and fighting for public education.”

This is not a new conflict

The JCEA has had a long-standing conflict with Better Education for Kids (BE4NJK), a conservative group backed by billionaire hedge funder manager David Tepper, and the dispute has spilled over into the 31st District Democratic primary on June 6.
The JCEA and Tepper have been at odds over the future of the school district for several years with each supporting opposing candidates. Some board members allegedly supported by Tepper’s organization helped appoint School Superintendent Dr. Marcia Lyles four years ago.
Tepper’s organization strongly supports charter schools and school choice for parents, which the union opposes. Strong union activity has since shifted the balance of power on the board in the union’s favor.
The JCEA originally split tickets for its endorsement, supporting Chiaravalloti, backed by the Hudson County Democratic Organization, and Zadroga-Hart. Hart is running with Christopher Munoz.
McKnight has a voting record that supports a progressive agenda, but she also is a vocal supporter of charter schools.
In an email withdrawing the support, the JCEA said Tepper’s organization had ties to Education Secretary Betsy DeVos, an appointee of President Donald Trump, and accused both Chiaravalloti and McKnight of being willing “to take money and support” from this organization.
DeVos has espoused a philosophy that would promote charter schools and establish a system of school vouchers which would allow funding to follow students even if they choose schools other than public schools.
Tepper’s organization has been a strong supporter of a number of reforms similar to those DeVos proposes, but has denied being a supporter of Trump. Tepper has been very critical of Trump in the past.
Those associated with Chiaravalloti said their campaign took no funds from Tepper or the organization he founded, disputing claims Greco made.
They were surprised by the JCEA’s action rescinding the endorsement, partly because nobody from the teachers’ union contacted them ahead of time to inquire about the flyer.
Shelly Skinner, executive director of BE4NJK, said the organization’s support for Chiaravalloti and McKnight was based on their legislative positions regarding education.
“We think they do good things for children and care about the kids and that’s what people want to see,” she said. “They are good legislators and promote good policy for the students.”
She also disputed the claim that the organization was pro-Trump.
“This shouldn’t be about conservative or liberal, it should be about what’s good for kids,” she said.

The original political endorsement and its withdrawal by the JCEA were considered unusual since this is the first time JCEA has endorsed in an assembly primary. But some people close to the election actually predicted the JCEA would endorse Munoz over Chiaravalloti in the first place.
“I was surprised and it was a momentary disappointment when it went to him,” Munoz said. “But I knew many of the teachers were with me and their vote doesn’t often reflect their leadership. But I have to commend the JCEA for this decision. This is what I tried to warn them about. My opponents are not pro-public schools.”
Munoz said neither action by the JCEA will change his game plan, and that he will continue to seek the support of teachers. Munoz is a teacher and currently a trustee on the Bayonne Board of Education.
Although seen as an underdog in this race with respect to money raised, Munoz said he has been very careful not to seek donations from anyone doing business with the city or the school district.
“Most of my donations average between $25 and $50, and come from people who might not be able to afford to give,” he said.
Zadroga-Hart, a teacher in the Jersey City school system and JCEA member, said she believes the conservative organization has long supported McKnight.
“Which makes sense given her active support for charters,” she said, noting that part of the reason for the original JCEA endorsement of Chiaravalloti had to do with his refusing to take donations from charter school advocates and that he supported a moratorium on charter schools.
After the JCEA conducted interviews of the candidates, it determined she and Chiaravalloti supported the issues of the union and its membership.
“Fast forward to last week, when the BE4NJK sends out mailers in support of both candidates, I assume, casting doubts on Nick’s claim that he refuses support from education reformers, especially when he did not come out and publicly say he does not want nor accept their support,” she said. “The JCEA members were furious that we endorsed a candidate that is supported by the very people we have been fighting to get off and keep off the BOE for fear of turning into Newark Public Schools.”

A lot of discussion

Greco of the JCEA, said the union had a lot of internal discussion with a governing board of directors
“It wasn’t an easy decision, but given that Angela (McKnight) is his running mate, she has a horrible track record here because she’s been very adversarial to board members we elected. As a local decision, it was a hard decision. It was something we had to do because we were flooded with hundreds of members contacting us saying why are we endorsing someone aligned with McKnight? We wanted to be sure that we were doing the right thing. We looked at the entire issue.”
Greco said candidates can accept donations from anyone.
“But this organization [the BE4NJK] is completely unorthodox in what they do. They have a terrible track record in Newark. They bankrolled candidates in Jersey City.”
Greco predicted that the voucher program will be stepped up under President Trump and DeVos.
“I believe something will happen very quickly in the Supreme Court to push vouchers and to further expand the charter movement and these corporations such as BE4NJK that run for profit schools,” Greco said. “How do I think it’s going to affect public education? It’s all semantics. We have approximately 40 school sites in Jersey City, most of them traditional public school buildings.”
On allocating $55 million to charter schools in the local school budget, he said: “That’s $55 million you’re shortchanging public schools. It’s like having two districts. It’s putting a great strain on the system.”