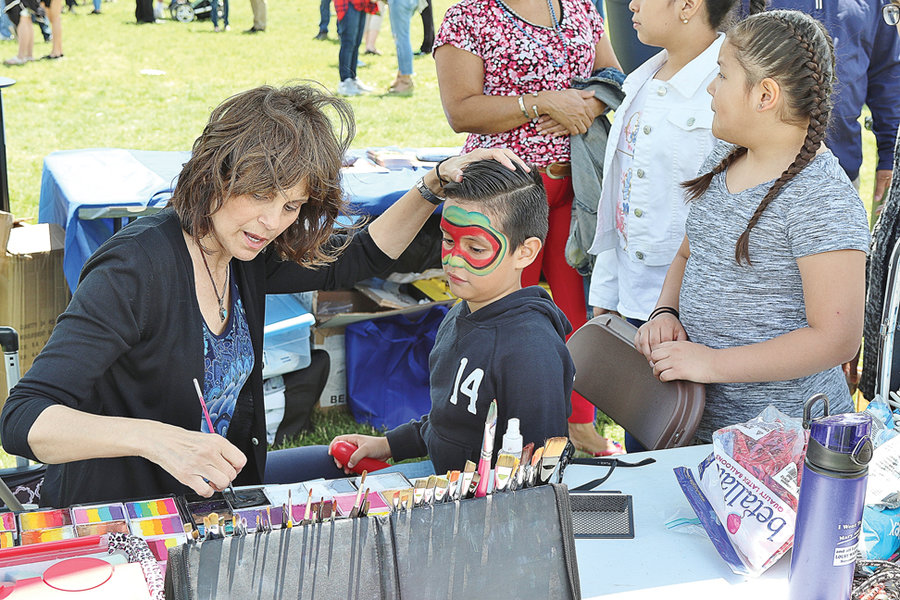 North Bergen officials have declared the fourth annual Summer Green and Health Fair an overwhelming success, with more than 2,700 residents and guests enjoying a day of outdoor entertainment and environmental education.

Nearly 50 vendors shared information on a wide variety of topics pertaining to environmental awareness and personal health at the event, which was organized by the North Bergen Municipal Utilities Authority and Health Department and held on June 3. Key sponsors Suez Water and Hackensack Meridian Health were joined by numerous other local and regional companies and organizations to fully fund the event, so the entire day cost taxpayers nothing while providing vital information to residents.

“Creating and managing events like the Green Fair takes an incredible amount of time and hard work, but it is worth it when you see thousands of residents coming out to enjoy a beautiful day like this one,” said Mayor Nicholas Sacco.

“I would like to thank all of the residents who attended this successful event and especially recognize the organizers and sponsors who made it possible.”

Kids had a field day at the event, enjoying a bouncy house, rock climbing, a dunk tank, a petting zoo, animal rides, face painting, and more.

Choruses from several area schools performed, along with a Sinatra tribute artist, local bands from the high school, and even The Referrals, a band of Lincoln School teachers featuring Principal Francis Pastore.

“The MUA is proud of the growth we have seen in this event since its inception, and of the fact that it is now becoming one of North Bergen’s most popular,” said MUA Executive Director Frank Pestana. “One of our missions is to educate the public about sustainability and environmental initiatives and the Green Fair is always a great opportunity to get people together to learn about our planet.”

The goal of the event was to provide education on healthy bodies and a healthy Earth. In addition to vendors like the Hudson County Improvement Authority and Passaic Valley Sewerage Commission offering information on environmental issues, local organizations like Meadowlands Hospital, the Act Now Foundation, and the Hudson Regional Health Commission provided a wide variety of screenings and information on keeping healthy.

The Green and Health Fair was started in 2014 to help the township meet requirements of the Sustainable Jersey initiative, a statewide program designed to encourage municipalities to engage in environmentally friendly practices.

“Seeing so many residents come out to learn how to be more healthy and active was inspiring and a testament to how engaged and interested this community is in these valuable programs,” said Castro. “The Green Fair allows us to showcase many fine organizations that are doing incredible work in the areas of health, wellness, and prevention and bring them directly to our residents to give them the tools and information they need to live a healthier life.”

The event came about due to the joint efforts of all the township’s departments, including Health, MUA, DPW, Parks and Recreation, Parking Authority, Public Safety, EMS, and Police, with support from the schools and library.

The North Bergen Free Public Library’s Children’s Summer Program Registration for both the Main Library and the Kennedy Branch will begin on Monday, June 19, 2017 at 9 a.m. Programs will begin Wednesday, July 5. Proof of age and residency are required. Registration is limited. For more information contact the North Bergen Public Library at (201) 869-4715 or visit our website at www.nbpl.org to view the program listings.

The North Bergen Housing Authority, in conjunction with the We Are One New Jersey (WAONJ) and Hudson County’s Citizenship and Deferred Action clinics, waived the Deferred Action for Childhood Arrivals (DACA) application fee and assisted residents in filling out their applications. Authority building managers hung flyers in Spanish and English throughout the four buildings NBHA manages, and reached out to individual residents they knew were actively seeking U.S. citizenship, to help them start the process.

“The partnership between North Bergen Housing Authority and We Are One New Jersey is more important now than ever before,” said Gerald Sanzari, executive director of NBHA. “North Bergen is the great community because of our diversity. Many different cultures call our community home.”

“I am so happy to finally be an American citizen, and exercise my right to vote,” said Vincente Pino Argotti, a resident of Terrace Apartments on Columbia Avenue. “Thank you to all my friends here at North Bergen Housing Authority and We Are One New Jersey for making this possible.”

Pino Argotti was honored by Mayor Nicholas Sacco, Freeholder Anthony P. Vainieri, Jr., and presented with a special cake at a separate service Tuesday, commemorating the renovations at Terrace Apartments.

Ricardo and Concepcion Pozo, residents of Lawler Towers, also were assisted by We Are One New Jersey in obtaining their citizenship, and were honored at a small ceremony by NBHA staff members and building managers and residents on Friday, May 26. Nine residents at Cullum Tower also obtained their citizenship through NBHA’s efforts with WAONJ: Geraldo Diaz-Valdes, Elsa Jorge, Octavia Chaves-Deavril, Blas Martromanzo, Marlene Parras, Maria Obergon, Nuri Ayaz, Armondo Romero and Olivia Trujillo.

Founded 58 years ago in Jersey City, Visiting Homemaker Service has operated out of several locations throughout North Hudson. The North Bergen office will now serve as their base of operations for the entire county.

Originally designed to provide homecare services to seniors and people with disabilities, the organization has expanded to provide family services and support to caregivers. They can be reached at (201) 656-6001 or www.vhshc.org.

Commissioner Julio Marenco and Parking Authority Director Robert Baselice joined in the ribbon cutting ceremony along with the full staff of Visiting Homemaker Service and many supportive friends and neighbors.

A judge has ordered that the father of a boy who perished in a March Union City fire should remain in jail, according to NJ.com.

A Hudson County grand jury returned an indictment against Eddie Gonzalez Sr., 27, and friend Edwin Diaz, 21, on May 24 for allegedly starting the blaze, which quickly spread and displaced over 40 families.

The decision came after an allegation in court from Assistant Hudson County Prosecutor Najma Rana that Gonzalez and Diaz accidentally started the fire, allegedly after a night of drug and alcohol use, by playing with matches in a rear room of 1404 Summit Ave. around 1 a.m. March 4, NJ.com added. A prosecutor’s office official confirmed Rana’s allegation for The North Bergen Reporter.

Both men face up to 10 years behind bars if convicted of the manslaughter charge, NJ.com reported. DePascale agreed to release Diaz, the second man, to home confinement after his lawyer revealed Diaz had told investigators what actually happened that night. Previously, the men had allegedly made up a story, NJ.com said.