Incumbent mayor reflects on state of the city 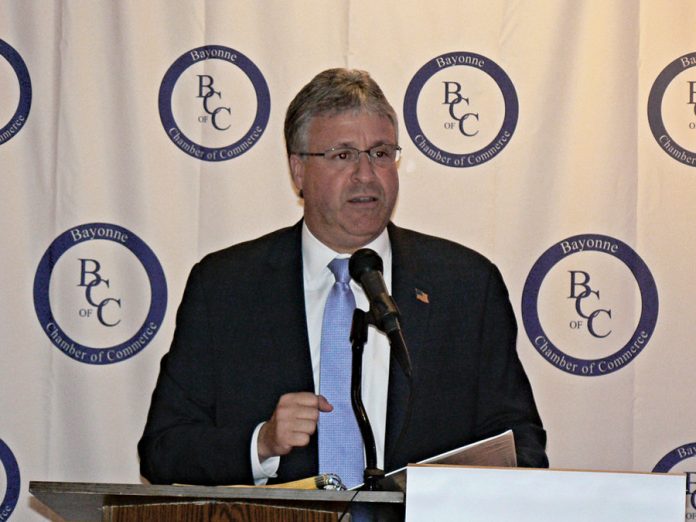 A community in decline tends to hunker down to save itself – mistrustful of new people and new ideas. Bayonne is past that and has learned to love again as it claws its way out of the 2008 financial crisis.
“I’m from Bayonne,” Mayor James Davis declared proudly about a dozen times throughout his State of the City address, initially striking a nativist tone that grew into a message of inclusivity and openness by its end, converting pride in Bayonne’s rich history into optimism for its next chapter.
His speech on June 15 at Villa Maria was different from past speeches. He looked more to the city’s future this time than to the idyllic version of Bayonne remembered fondly by residents of his generation. Davis believes Bayonne can be better than ever, but not without preserving what urbanizing cities across the country too commonly forfeit in exchange for growth—a sense of community.
His speech in many ways was a welcome mat for newcomers, but also a call for current residents to truly embrace community, not just in the abstract sense of supporting local business and attending the festivals on Broadway, but to come out of their homes and “intermingle” with neighbors. “What I need adults in this city to do is become a community again,” said Davis, touting the benefits of safety, cleanliness, livability, and sociability.
His administration facilitated various initiatives to get people out, such as beautifying Broadway and sponsoring new and more frequent festivals and art programs. “Build and they will come” could be the mayor’s approach to socializing the city. “All these undertakings make our lives a little better and are an inducement for new residents to move into our town and enjoy the Bayonne lifestyle,” Davis said. “The fact is we need new people to say, ‘I’m from Bayonne.’”

Since taking office in 2014, Mayor Davis’s first two years in office were largely spent making the city attractive for developers: expediting remediation projects and redevelopment plans, settling lawsuits, and adopting the use of payments in lieu of taxes.
Since delivering his 2016 State of the City mantra to “develop or die,” Davis faced unforeseen challenges. The school budget turned up a $6 million deficit, the rejection of a mosque application by the zoning board brought negative national attention, a recent string of car burglaries and thefts has residents on edge, and a sexting accusation lodged against the mayor by a former city employee a month ago put Davis off stride. Yet he is far from dead, and development is booming.
“Bayonne is changing. Everything changes, folks,” Davis said, citing the visual enhancements along Broadway and Avenue E that for decades were only hypothetical. “Our goal is to make sure Bayonne changes for the better, and we are doing that,” Davis said. “The signs of positive change are all around us.”
Davis’s crowning achievement may be what eluded mayors since 2000: selling land on the former Military Ocean Terminal Base. “That’s right,” Davis said. “We sold a piece of property at the base and added it to our tax rolls.”
The sale of any other plot of land would not have received applause from the crowd, but this one did. “After all this, we will be seeing the promise of development at the Military Ocean Terminal finally become a reality,” Davis said.

With a mayoral election around the corner, Davis’s speech was understandably scant on substance; being too forthright in Bayonne politics often backfires. The important thing is to keep pace and pick battles carefully. Davis referenced the school district’s fiscal crisis as one battle he will not shy away from. “As a mayor, and as a parent, the hands-off approach is unacceptable,” he said. “I am confident that together we can solve any issue to make our schools the best they can be. Finger pointing does not solve problems. Hard work by dedicated people, working together toward a common goal solves problems.”
As an example of that pragmatism, Davis announced the city and the school district would merge prescription drug healthcare plans that would save the city and the district hundreds of thousands of dollars each.
He derided those who “make the school system’s issue a political football,” and “those who want to stop progress and play politics to hinder our success.”
In the passion of his concluding remarks, Davis quoted Winston Churchill: “Success is not final, failure is not fatal. It is the courage to continue that counts.”
“We need to push forward, challenge the old way of doing business, to explore new ideas and solutions,” Davis said, promising to “not be deterred by any failure.”
“Let us all proclaim to the naysayers, the state of the city of Bayonne is very good, and because we are from Bayonne it will only get better.”