Rocking on the Fourth 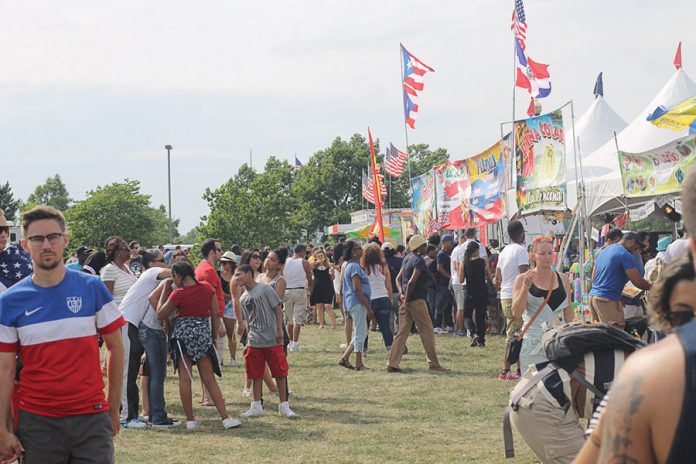 Jersey City Mayor Steven Fulop announced the return and the expansion of the one-of-a-kind Jersey City Freedom & Fireworks Festival at Liberty State Park on Tuesday July 4 from 1 p.m. to 10 p.m. This year’s Fourth of July family-friendly festival’s location has moved to the center of the park, in the Green Ring, to better accommodate the more than 150,000 expected attendees.
Among the multiple acts of the day, viral sensation Tim Kubart will perform some of his Grammy award-winning children’s music. Jersey City’s own Kool & the Gang will headline the day of fun, taking the stage at dusk and performing classic fan favorites just before Grucci, America’s First Family of Fireworks puts on their nationally-recognized fireworks display.
Grucci is a sixth-generation, family-owned and operated fireworks company that has developed a prominent reputation, having performed at eight U.S. Presidential Inaugurations, Olympic Games and World’s Fairs, and earned the Guinness World Record for the “largest fireworks display” ever recorded.
With the downloadable Grucci Fireworks app, attendees will be able to sync the music for the fireworks performance directly to their smart phones.
With the Statue of Liberty and Ellis Island as a backdrop, the event will include entertainment for adults and kids, a smorgasbord of food, carnival rides, an expanded beer garden, live performances from two stages, and a grand finale of breathtaking fireworks visible from both sides of the Hudson River. For the first time this year, fireworks will be set off from both a barge and from land.

This event is free to the public

This annual event was started four years ago after New York City’s fireworks display was moved to the East River. Mayor Fulop decided to fill the gap on the New Jersey side by revamping the Jersey City fireworks that were eliminated in 2008 due to budget cuts by the previous administration. Acquiring several sponsors and partners has enabled the resurrection of the celebrations.
This year’s partners include the city’s Office of Cultural Affairs, the Jersey City Economic Development Corporation, South House Bar and Restaurant, Suntex Marinas Jersey, Jersey City’s Stop the Drop Anti-Litter Campaign, Liberty State Park and Grucci, America’s First Family of Fireworks.
“Four years ago, we made a pledge to bring back the Jersey City fireworks and festival and make it bigger and better than it had ever been,” said Mayor Fulop. “And each year since, we have grown the event, drawing more attractions, larger acts and bigger crowds. We couldn’t be prouder and more excited to welcome Jersey City’s own Kool & The Gang to headline the concert this year that will be enjoyed by over 150,000 people in one of the most patriotic settings to celebrate our country’s independence. We hope to see everyone there.”
Children can enjoy 12 different carnival rides, bounce houses, a kite show by Wind Wolves, among other activities. And if that doesn’t wear them out, families can watch and dance to 14 different performers taking the carnival stage throughout the day and night.
Adults 21 and over can also sip beer and sangri in the South House Beer Garden, now bigger to accommodate growing crowds. And everyone will have their pick of food after working up an appetite with over 20 food trucks serving a variety of patriotic plates.
For more information on the event, transportation, what to bring, and more visit www.FreedomAndFireworks.com or the city’s social media pages and website: jerseycitynj.gov.

Transportation to the event

Anyone attending the event is strongly encouraged to arrive by foot, bike, or public transportation to Liberty State Park. Parking will be extremely limited in the park and surrounding areas.
Guests may arrive on foot or by bike through the Ethel Pesin Liberty Footbridge which connects downtown Jersey City with Liberty State Park. The footbridge is located at Jersey Avenue and Mill Creek Road, and is in close proximity to the Grove Street PATH and three Hudson-Bergen Light Rail Stations: Marin Blvd, Jersey Avenue, and the Liberty State Park station. Liberty State Park can also be reached on foot via the Hudson River Waterfront Walkway so anyone wishing to attend the event from downtown Jersey City can walk to the park along the walkway.
This year there will be added shuttles transporting attendees to and from the festival approximately every 20-30 minutes.
NJ Transit’s Hudson-Bergen Light Rail (HBLR) will be providing regular service to Liberty State Park, via the Liberty State Park station. Due to the high attendance forecast for the evening fireworks and concerts, attendees are advised that HBLR service capacity is extremely limited and as a result, customers will experience delays leaving Liberty State Park station, in particular following the fireworks.
Attendees planning to utilize Hudson-Bergen Light Rail service to and from Liberty State Park for the July 4th fireworks may encounter overcrowding, service delays due to the limited operating capacity, and extensive wait times which could span in excess of hours. With this, attendees planning to use the HBLR should build enough time into their travel plans or consider leaving the park before the end of the fireworks or remaining in the park after the fireworks to participate in planned activities. Customers are strongly encouraged to buy roundtrip tickets from ticket vending machines in advance of the fireworks event.
Guests utilizing the PATH train system should check the PATH website at http://www.panynj.gov/path/full-schedules.html for an updated holiday schedule.
Liberty Landing Ferry (water taxi) will run every 30 minutes until 8:30 p.m. to Liberty Landing Marina and Warren Street in Jersey City and World Financial Center Terminal in New York.
Jersey City will provide water taxi service free for guests between 8:30 and 11 p.m. between Warren Street and Liberty Landing Marina only. You can view their schedule via their website: http://www.libertylandingferry.com/weekend-schedule.aspx.
Parking will be available throughout the city. Visitors are advised to use only registered and licensed parking facilities. Check with lot operators for fees and hours of operation.

Bags, backpacks, coolers will be subject to search

Bags brought into Liberty State Park are subject to search by law enforcement authorities. Attendees are encouraged to pack belongings in clear bags that show contents. Coolers will not be allowed on festival grounds. For a full list of what can be carried into the festival and what is banned, please visit http://freedomandfireworks.com/what-to-bring/.