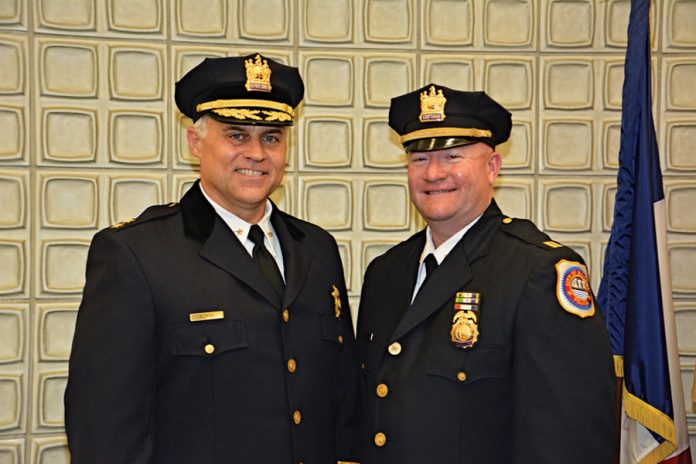 Former Deputy Police Chief Drew Sisk was sworn in as Bayonne Police Chief this month. His desk now overlooks two large televisions mounted on his office wall that display real-time police dispatches. He’s in charge now of overseeing the entire department, taking over from retired Police Chief Drew Niekrasz, who was in Sisk’s graduating class of 1988 at the Jersey City Police Academy. “I actually wanted to be a mortician,”Sisk revealed. “I was an apprentice mortician for a brief amount of time before I decided on a career as a police officer.” Sisk attended mortuary school, learning about embalmment and driving hearses. But Sisk was inspired by family and friends who were joining the police ranks. He said he intends to build on the policies of former Police Chief Niekrasz, who was instrumental in modernizing the department’s technology. “He was a real tech guy and made very important advancements here at the department,” Sisk said. “We owe a lot to Chief Niekrasz.” Click here for more.

The Bayonne Board of Education (BBOED) hired back 116 teachers at a special meeting on Thursday, July 6, after laying off nearly 300 staff members in the spring to ease a substantial budget shortfall unearthed in November. The reinstatements bring the total number of staff brought back to 204. Parents and teachers crowded around a bulletin board, where notices of the reinstatements were posted before the start of the meeting, relaying the good news to friends in the crowd with thumbs up. The news comes right after the State Legislature agreed on a new school funding formula, in which Bayonne would receive six percent more than what Gov. Christopher Christie proposed in his “Fairness Formula,” amounting to about $3.2 million. Click here for more.

Cities across the country are in revival mode. Neighborhoods once isolated are now connected. Once dangerous roads are now safer for pedestrians and cyclists.Towns are facilitating projects that bring with them increased commerce and housing. But those projects need financing, and when a city doesn’t have enough money, it borrows. Typically, municipalities issue municipal bonds to cover the costs of a project, which a bank underwrites. Then,the municipal government pays interest to the bondholders using residents’ taxes. Meanwhile, bondholders live all over the world, oblivious to the projects they’re helping to finance and the community paying them interest. Bonds can also be part of an index fund managed by a securities firm, so investors do not have a direct relationship with the projects they finance. That’s the old way of municipal finance. But today, cities are experimenting with new financial technologies that can tap financial resources from more people at the local level, giving residents investment opportunities and a stake in the project’s success. They’re called “mini-bonds.” Like the name suggests, mini-bonds are types of municipal bonds that are issued in smaller denominations. While the threshold to purchase a municipal bond is $5,000, mini-bonds can be issued in denominations of $500 or $1,000, or however much a municipality decides. Purchasers are paid back in tax-free interest over the bond’s life span. Click here for more.