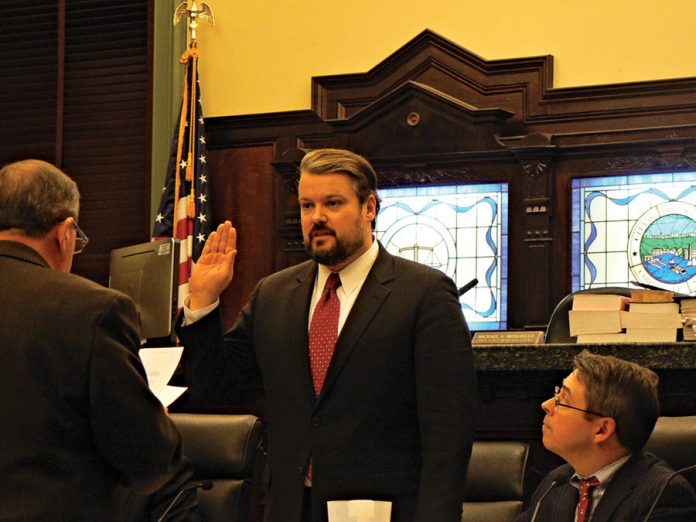 HOBOKEN — In an interview Thursday, July 13, Hoboken City Councilman At-Large David Mello said he is “definitely running” and has picked up his forms to run for re-election in November.
Along with the mayoral election, three at-large council seats will also be on the ballot this fall.
“I feel I have a good record for fighting for a bundle of issues… especially as west of Willow continues to develop and grow and rehabilitate,” said Mello. “I believe the Southwest Park would not have been built if I wasn’t on the council. I chaired the committee that included park and open space amenities to the Jackson Street development.”
He had been rumored to join councilman and mayoral candidate Michael DeFusco’s ticket but both he and DeFusco said this is not the case.
“I am definitely running. I am still weighing my options on whether I will run independently or join a ticket,” said Mello.
DeFusco said Mello will not be his third candidate. DeFusco has announced two out of three candidates for his slate including residents and businessmen Michael Flett and Andrew Impastato.
Some residents have expressed concerns with DeFusco’s pick of Flett, as he voted for and donated money to Donald Trump.
In an email, DeFusco responded by stating, “Michael Flett has supported both Democrats, including Dawn Zimmer, and Republicans who he believed would work to change the status quo and deliver better results on the issues he is most passionate about — like improving the economy and protecting our environment. Anyone who knows Michael understands that he is a dedicated community leader and someone who is always working to give back to our city. As the first openly gay candidate for mayor of Hoboken and a progressive Democrat, I know that just because Michael and I disagreed on a federal election that doesn’t change the fact that he would make an excellent council member and he is someone who I am excited to work closely with.”
Councilman and mayoral candidate Ravi Bhalla announced his full slate last week including Councilman Jim Doyle, and residents Emily Ball Jabbour and John Allen.
Jabbour is a senior social science research analyst for the Administration for Children and Families, part of the U.S. Department of Health & Human Services. She also founded the Hudson County chapter for the national grassroots organization Moms Demand Action for Gun Sense in America.
Allen is an attorney at the law firm of Schenck, Price, Smith & King, LLP, where he specializes in the representation of governmental bodies, including boards of education and municipalities. (See earlier news item on the choices.)
Mello said he was surprised by Bhalla’s choices.
“I’m disappointed with the lack of experience on his ticket,” said Mello.
DeFusco released a statement blasting the picks. “It was difficult to contain my shock at hearing that Ravi Bhalla, a politically connected insider lawyer at one of New Jersey’s most powerful law firms, made the stunning choice to select a fellow political establishment attorney in John P. Allen for his council slate,” he said. “Who could have ever guessed that a lawyer like Ravi, whose law firm was paid over $3.8 million in government contracts in 2016, would decide to run with a lawyer whose firm was also paid over $3.8 million in government contacts? A truly inspired, outside-the-box pick.”
ELEC documents confirmed both law firms received about $3.8 million in government contracts.
Rob Horowitz, spokesperson for Bhalla and his slate, responded via email.
“Once again Mike DeFusco is showing his true colors putting his naked ambition ahead of principle. DeFusco neglected to mention that two days ago he solicited the support of John Allen and his fiancée Tara Mullins for his campaign, asking them to host a meet and greet, and even going so far as dangling the prospect of a board appointment. Class is welcoming opponents into the race, not hypocritically attacking them on day one.”
DeFusco said this is not the case.
“Neither myself or anyone from my campaign ever approached John Allen about running for council on our ticket. John’s fiancee, who is a personal friend, had contacted me several months ago about John’s interest in serving on a volunteer board,” said DeFusco. “I inquired about potentially hosting a meet and greet event for our campaign, however once I became aware that John was running on Councilman Bhalla’s ticket I wished her well and ended the conversation. It’s disappointing to see false rumors like this being spread about our campaign and I would hope that my opponents will refrain from engaging in this kind of blind speculation and focus on their own campaigns moving forward.”