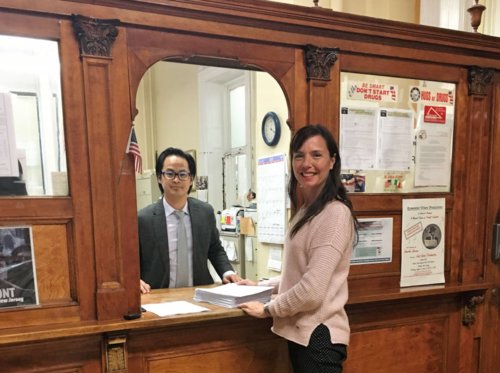 HOBOKEN – Hoboken City Council President and mayoral candidate Jen Giattino became the first candidate to file nominating petitions with the Hoboken City Clerk on Thursday.
She announced her candidacy on June 27 shortly after Hoboken’s current Mayor Dawn Zimmer declared she would not be running for re-election in November. She and some of her council allies mobilized despite Zimmer endorsing another council member, Ravi Bhalla.
Giattino submitted the 360 signed petitions that are required in order for candidates to be placed on the ballot for the election in November.
“I am honored to receive so much support from across Hoboken for my candidacy.” said Giattino. “This is such an important election for all of Hoboken and I am encouraged that so many people share my vision for an agenda that addresses community needs, manages our explosive growth, and protects the quality of life we are so fortunate to enjoy.”
Giattino will continue to collect further signatures between now and the deadline of Sept. 5 for both her candidacy and for her City Council slate, which she will announce Friday at 12:30 p.m. at Church Square Park.