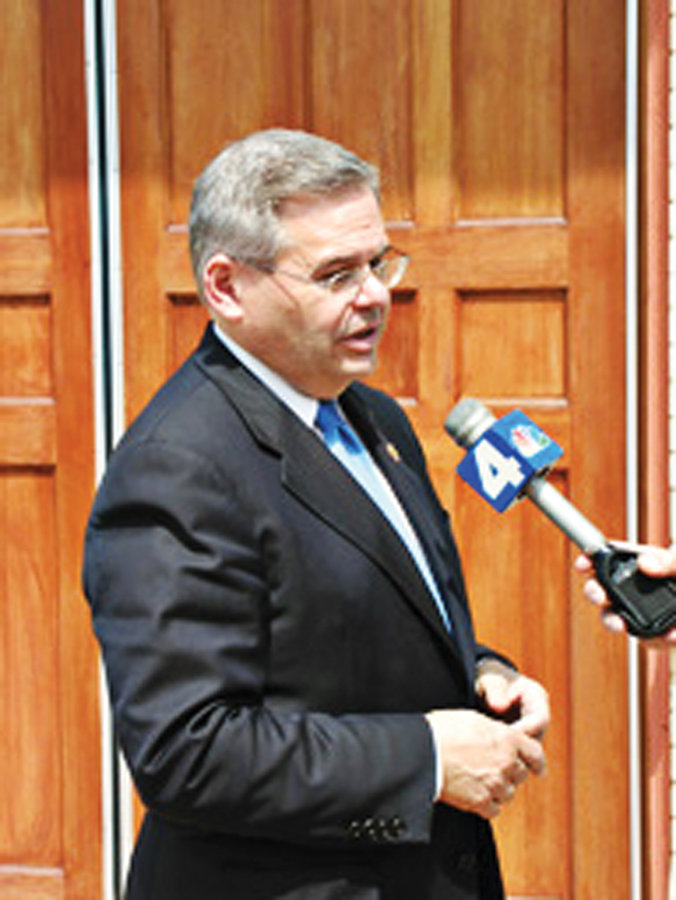 U.S. Sen. Robert Menendez’s corruption trial, which started on Aug. 22, will be one of the most closely-watched political trials in the nation. Nothing less than a change in the political balance of power in the U.S. Senate may hang on the outcome.
The fear among national Democrats is that a conviction could lead to Menendez, a Democrat, relinquishing his seat in exchange for sentencing leniency. Because Gov. Christopher Christie, a Republican, would name his replacement, this could cement the Republican Party’s power in the upper house.
The seat could pass into Republican hands, possibly giving the GOP a deciding vote on major legislation such as health care, tax reform, and appointments to federal courts over the next year.
But according to the Congressional Research Service and The New York Times, a bribery conviction would not automatically force Menendez from office, under the Senate rules. He would either have to voluntarily resign his seat, or two-thirds of his Senate colleagues, including at least 15 Democrats, would have to vote to expel him.
On Aug. 22, 10 jurors were seated and Menendez and his co-defendant, Palm Beach retinal specialist Dr. Salomon Melgen, entered not-guilty pleas. Melgen was found guilty on April 28 of 67 counts of Medicare fraud in the Southern District of Florida. Shortly afterward, Menendez insisted the Melgen verdict would have no impact on his case.
Menendez is charged with allegedly doing official favors for Melgen in exchange for lavish vacations, private jet flights, and political contributions.
The indictment alleges that Menendez intervened in a dispute between Medicare and Melgen at Melgen’s request, and also in a contract dispute in the Dominican Republic involving one of Melgen’s companies. Menendez has said he merely helped out a constituent.

A conviction could end Menendez’s political career, which started right out of high school when he became a Board of Education member in Union City. He rose to mayor of that town. He eventually became a state legislator and a powerful member of The House of Representatives, and ultimately the U.S. Senate.
Menendez, 63, was born in New York City to parents who had left Cuba a few months earlier.

Are the charges too vague?

The trial, which is expected to last a week or ten days, is being overseen by U.S. District Judge William H. Walls in Newark.
Prosecutors are expected to present to the jury evidence of the gifts Melgen allegedly bestowed on Menendez. He is accused of accepting gifts, expensive meals and outings from Melgen as well as hundreds of thousands of dollars in political donations in exchange for using the power of his office to lobby for his wealthy benefactor’s extensive financial and personal interests in Washington.
The defense is expected to cite the long friendship between Menendez and Melgen, and that the gifts were unconnected to his role as senator.
The case against Menendez and Melgen was instituted by the Justice Department’s anti-corruption unit and include charges of bribery, conspiracy, violations of the travel act.
Walls dismissed four of the bribery counts last year, but the prosecutors filed an 18-count superseding indictment including additional charges, to which Menendez and Melgen pleaded not guilty last week.
One of the areas of concern is the fact that Menendez failed to report the gifts as required under the federal Ethics in Government Act. Prosecutors also alleged that Melgen steered contributions to Menendez’s political war chest that allegedly avoided legal reporting avenues.
Prosecutors claim that Menendez, in return, served Melgen’s business interests. Defense attorneys in the past have called the charges “vague” and said there is no evidence to show a quid pro quo.
Menendez’s defense attorneys and those politically loyal to him argue that Menendez did nothing out of the ordinary, and that the services he provided Melgen are what any legislator would perform.

Menendez’s legal team has performed a number of legal maneuvers in order to get the case thrown out, including taking their argument to the U.S. Supreme Court. Earlier this year, the court declined to dismiss a federal indictment against him, setting the stage for the current trial.
Abbe Lowell, Menendez’s lawyer, was quoted as saying, “It’s disappointing that the Supreme Court did not take this opportunity to set a clear, bright line of the separation of powers to ensure that Congress remains an independent and co-equal branch of government, free of interference and retribution from the executive as the framers intended.”
In July, Menendez’s legal team again asked a federal court to dismiss political corruption charges against him, citing a 2015 U.S. Supreme Court decision that seemed to constrict the federal bribery statute.
The lawyers also cited the recent reversal of a conviction of New York State Assembly Speaker Sheldon Silver, whose conviction charges will have to be retried. Silver’s case, however, is very specific in that the court based its reversal on instructions given to the jury that may have affected the case, leading prosecutors to believe they can still obtain a conviction.
In Menendez’s case, a conviction could end his political career.