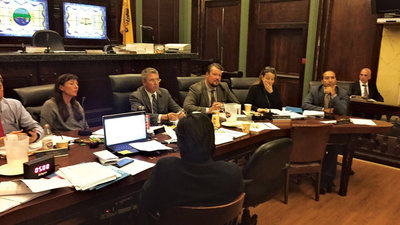 The Hoboken City council pulled a resolution and ordinance pertaining to a proposed agreement with Suez.
×

The Hoboken City council pulled a resolution and ordinance pertaining to a proposed agreement with Suez.

For eight years, Mayor Dawn Zimmer and her allies on the City Council publicly supported each other’s agendas – but with a contentious election less than two months away, it’s not just the local water mains that are breaking up.
The Hoboken City Council met late on Wednesday Sept. 6. to discuss a proposed agreement with the Suez water company and an undisclosed $8.3 million liability. The agreement states how much Suez will spend on repairs to the aging system in the future, in exchange for a rate increase for residents.
The council members who are running against the mayor’s chosen candidate for her job in November have been expressing concerns about the proposal. In a rare move, Zimmer herself came to the council meeting on Wednesday night to support the proposal and point fingers at its critics.
In the end, after two hours of discussion, both a resolution and an ordinance related to the deal were pulled from the agenda.

Council members questioned the city’s knowledge of bulk water debt and listened to Zimmer state why she wanted the agreement to move forward.
During the meeting, councilman and mayoral candidate Ravi Bhalla – whom Zimmer has publicly endorsed for election to her job in November — recused himself from discussions pertaining to Suez. He did so at the request of councilman and mayoral candidate Michael DeFusco, who expressed concerns because Bhalla’s law firm has worked with Suez in the past. Suez has been listed on the firm’s site (as recently as this year) as a client, but Bhalla says that he does not work with them.
Bhalla said that although he doesn’t believe there is a conflict of interest, he wanted to err on the side of caution.
Both the resolution — which would have authorized the city to enter into a memorandum of understanding with Suez — and an introductory ordinance creating a capital reserve account dedicated to holding funds for the water system improvements, were pulled from the agenda and no vote was taken.

Suez is a private company that provides the city with water and maintains the water pipes. (The city’s sewer system is run separately by the North Hudson Sewerage Authority.)
The city’s current contract with Suez was signed in 1994. The city sold its water rights to United Water (now Suez), giving them the right to profit from the system in exchange for their maintaining the system’s operations, eliminating the city’s municipal utility authority, and paying the city of $13.2 million to close budget gaps through 2001.
Under this contract, set to expire in 2024, Suez Water is only obligated to provide $350,000 a year for improvements to the city’s water delivery system. The city is currently contractually obligated to pay for any repairs that exceed the $350,000 annual maintenance allowance.
The city must also pay for “bulk water” costs not covered by ratepayers. Bulk water is purchased from the Jersey City MUA that supplies Hoboken’s water system.
The city has proposed a new agreement with Suez to extend the contract to 2034 and provide the town with what the city says is $40 million in economic benefit, including infrastructure upgrades and a debt forgiveness of roughly $10 million owed to Suez for repair and excess bulk water use.
In exchange, the proposed agreement offers a one-time 1.8 percent rate increase in 2018 and gradual rate increase of 2 percent per year for six years to reach true bulk water cost, with any future bulk water cost increases after those six years passed to ratepayers.

Zimmer addressed the council, stating that she hoped the council would put politics aside.
She cited the debt forgiveness and infrastructure repair capital as highlights.
“It would create a fairer system by making additional future costs for water and maintenance the responsibility of water ratepayers based on water usage, such as car washes, Laundromats, and commercial operations, rather than leaving a substantial portion of the burden paid on taxpayers as the current agreement requires,” said Zimmer.
She then addressed several members of the council specifically including Ruben Ramos, Tiffanie Fisher, David Mello, Jen Giattino, and Peter Cunningham.
Giattino is running for mayor against Bhalla, supported by Fisher and Cunningham. Mello is running for council on Freeholder Anthony Romano’s mayoral ticket. Ramos is supporting mayoral candidate Councilman Michael DeFusco.
Zimmer said Ramos “rubber stamped” an amended agreement in 2001 that reduced Suez’s obligation from $550,000 per year to $350,000 per year for 23 years, which she said cost the city $17.6 million and “created the enormous bulk water liability for the city that everyone is so concerned about.”
“And what did we get in exchange for this enormous $17.6 million cost? We got a mere single $2.6 million payment that Mayor Russo, with the support of Councilman Ramos, used to plug a budget hole,” she added.
According to the council minutes, Ramos was absent when the council voted on the first reading of the amended deal on June 6, 2001 and approved the contract extension after a final reading on June 20, 2001.
She also said that Mello told the media that the contract wasn’t an improvement over the past.
But, she said, “The council has repeatedly been provided with information making clear that this is not true; there is a $40 million benefit to the city and its taxpayers.”
She added, “Councilwoman Fisher, supported by Councilman Cunningham and Council President Giattino, have made references to unspecified unanswered concerns while demanding that we hold numerous additional meetings out of the public eye, while at the same time claiming to champion transparency…The demand that we engage in an endless process behind closed doors is simply a transparent attempt to avoid taking a vote on a critical issue because there’s an election coming up and the politics are complicated.”
Fisher responded to this point later in the meeting by saying that requesting closed sessions and subcommittee meetings is not a lack of transparency, but a way for the council to grasp a full understanding of the agreement.
Zimmer said, “I urge you to put the politics aside and to do the job that we were all elected to do … I hope everyone will support this. But if you do not, then please say clearly what you would support.”

Several members of the council took offense at Zimmer’s statements.
Councilman Michael Russo said, “For a statement that started with, let’s not get politics involved, you sure made it clear as you hit everybody supporting someone in this election.”
He added, “Just because our opinion may be different from yours, you shouldn’t berate council people who have lain down in the street for you in the past. You should be ashamed.”
Michael DeFusco — who, like Fisher, Giattino, and Cunningham, generally supported Zimmer until this year — said, “Mayor Zimmer, I was with you for many votes. It is unfair to every member of this body to say we are playing politics when in reality we are just as tired as everyone else is with water main breaks and collapsing infrastructure.”
Ramos said, “To show that this process has nothing to do with politics, I called Council President Giattino this afternoon. That’s what a professional does. I had an e-mail conversation with Councilwoman Fisher to get more information from her.”
In an email after the meeting regarding aspects of the proposal, Giattino said, “I am also offended by the prepared remarks read by the mayor at the meeting, attacking me and my council colleagues and alleging the concerns raised by the council were politically motivated. I am disappointed that after over six years supporting her and her agenda, that Mayor Zimmer would feel compelled to make such politically charged and baseless statements. She should know that I will always challenge and engage in healthy debate to ensure we are doing what is right.”
When asked what other issues she has publicly disagreed with the mayor on during those six years, Giattino did not answer the question, saying only, “For me this is not a political issue. It’s about an unfunded liability that the council had no idea about, and no matter who did that, I would have a problem…This isn’t about agreeing or not agreeing with someone.”

Past budget issue comes to light

The council also asked the city’s 2015 budget Auditor Steven Wielkotz why there was no amount for the bulk liability allocated in the city’s budget, when they were aware of a debt.
Wielkotz said to the best of his recollection, he, the mayor, and then-Business Administrator Quentin Wiest had a phone conversation about the liability, which was unspecified at the time. During the discussion he was told the liability would be part of ongoing negotiations and, as they never received a bill or a dollar amount, it was not necessary to allocate funds for the liability in the budget.
This led the council to ask when current Business Administrator Stephen Marks was informed of the liability amounting to $8.3 million. He said he was made aware of the amount a few months ago.
DeFusco said, “This is either negligence or intentionally underfunding a budget.”
Ramos said he would put forth a resolution at the following council meeting asking the Department of Community Affairs to investigate. The DCA is a state body that deals with local governments.
Members of the council also said they had concerns with the agreement not only because of this liability that can be used as leverage, but also because the city never sent out RFP’s (requests for proposals) from any other companies to explore there options.
Fisher said that in subcommittee she was also told the agreement was above market rate, although no one knew by how much. She said she wanted to know how much Suez stands to profit from the agreement.

In a follow up interview, Zimmer said, “I feel we negotiated a good agreement and I was asking the council to take a vote. Last night they refused to take a vote and the people of Hoboken deserve a vote on this urgent issue. They deserve to know the council members’ positions.”
Regarding the council’s allegations, she said, “In regards to their accusations, we followed the advice of our professionals that was provided to us at the time.”
DeFusco sent a letter to the DCA the day after the council meeting asking for an investigation. DeFusco said all municipalities must include all outstanding liabilities in their annual budget.
In her followup email last week, Giattino said, “The auditor and the city’s financial consultant attended last night’s council meeting, and after hearing both speak on the matter, my concerns are now greater that the substantial liability has not been properly accounted for and that an independent investigation into this matter is warranted.” 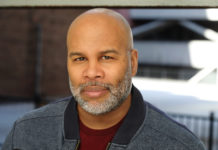 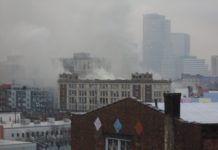