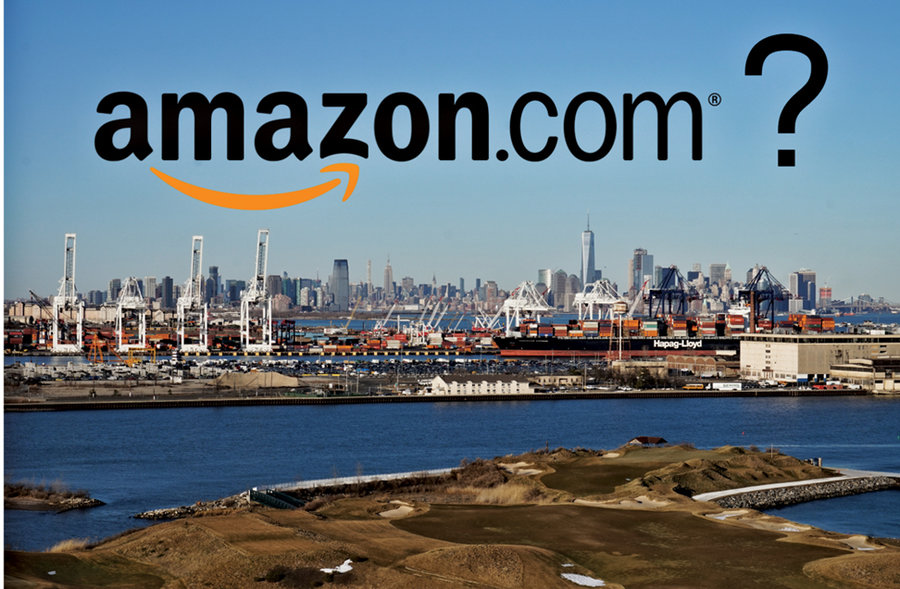 The City of Bayonne announced it will respond to Amazon.com’s request for proposals (RFP) for a location to build a second headquarters, joining hundreds of cities across the U.S. and Canada competing to host the multinational online retailer, which ranks 26th in the world in revenue.
The RFP, issued in early September, outlines plans to hire 50,000 employees at an average six-figure salary for its second headquarters and build eight million square feet of office space, similar in size to its 33-building headquarters campus in Seattle.
Amazon’s list of four top priorities, according to its RFP, include a 100-acre greenfield site with utility infrastructure in place in which to build the complex. Bayonne’s former Military Ocean Terminal Base (MOTBY) fits that bill with the largest expanse of undeveloped land on New York Harbor, and Mayor James Davis wants to see the location seriously considered.
“We have a 200-acre tract of land on the base, shovel-ready,” Davis said. “Amazon can build anything they want, the way they want to build it, while having skyline views of Manhattan. There is no better place in the country to build this headquarters than on that base.”

MOTBY was decommissioned as a military base in 1998, and protracted efforts to develop and generate revenue for the city have conjured both hope and frustration in the minds of residents ever since. With five developers set to break ground on residential buildings on the base and local officials pushing for ferry access, the housing and mass transit options can make the base more attractive for companies to locate there.
Bayonne and the greater area could stand to see billions of dollars in economic development if a company like Amazon were to construct something as big as a headquarters. The last time a company that large came to Bayonne, the city changed into the blue-collar industrial town it is now known for.
“Bayonne was a shore town, then Rockefeller came with Standard Oil,” Davis said. “That turned Bayonne into an industrial city. And now you would have Bezos coming in and modernizing the city with the tech world.”

Amazon’s nationwide search for a second headquarters is good news for Amazon, and an opportunity for cities like Bayonne to show interest in hosting major corporate offices.
Even if Amazon goes with one of the other 100 cities that respond to the RFP, Bayonne is positioning itself to attract big fish. “Even if they decide to go somewhere else, how do I know another tech company won’t be interested in that land,” Davis said. “The presence of a major corporate headquarters on MOTBY would bring so much to the city.”
The presence of such a headquarters could raise local property values and median incomes, and with it, tax revenue for the city, potentially making for a more fiscally stable municipal government.
But local resident Peter Sarna had some reservations. “I’m not a fan,” he said. “It only looks good on paper. We’re always thinking about these ‘what-ifs’ without understanding how it’s going to affect us. Prices are going to go up, and taxes are already too high. A lot of people are already struggling.”
Meanwhile, other residents, like Sai Patel, a computer engineering student, said he would like to see companies like Amazon in Bayonne, not just for the economic vitality it could bring the city, but so people like him don’t have to commute all the way to New York City. “I would love it if companies came here. I could walk or take only a stop or two on the light rail,” he said. “I don’t think anyone likes long commutes.”