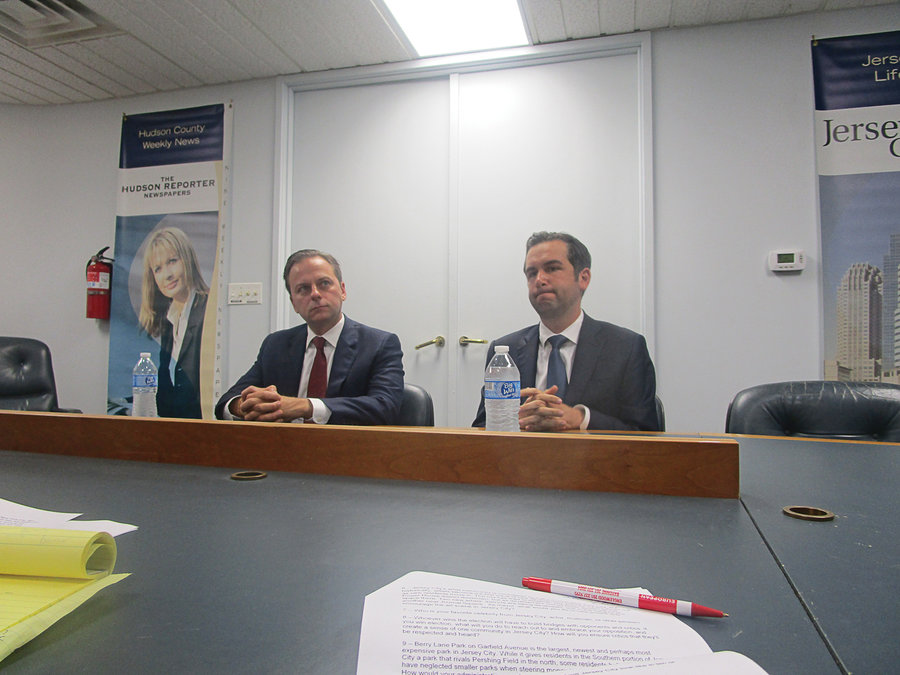 ISSUE BY ISSUE – Mayor Steve Fulop and his opponent Bill Matsikoudis disagreed on many issues, as well as the philosophy for future growth, during a recent video debate.
×

ISSUE BY ISSUE – Mayor Steve Fulop and his opponent Bill Matsikoudis disagreed on many issues, as well as the philosophy for future growth, during a recent video debate.

Saying the 2017 municipal election will decide of the future of Jersey City, Mayor Steven Fulop and his challenger Bill Matsikoudis went head-to-head in a video debate hosted by The Hudson Reporter that will be posted at www.hudsonreporter.com early this week.
Fulop is seeking reelection to a second term on Nov. 7, and Matsikoudis, a former attorney for the city, hopes to unseat him.
“I’m asking voters to let me finish what I started four years ago,” Fulop said. “When we started this, we always knew this would take eight years.”
Fulop said he will not seek a third term if reelected.
The Nov. 7 election has the potential to completely reinvent Jersey City government in terms of development and other issues – especially since the mayor’s seat and all nine council seats are up for grabs.

Fulop is the 49th mayor of Jersey City. He took office in July 2013, beating Mayor Jerramiah Healy despite Healy getting personal endorsements from President Barack Obama and others. Prior to becoming mayor, Fulop served as the Ward E councilman for eight years.
A first-generation American, Fulop grew up in Newark, and later worked for Goldman Sachs investment banking firm in Chicago, New York and Jersey City. After the terrorist attacks on Sept. 11, 2001, Fulop enlisted in the U.S. Marines and was deployed to Iraq. Upon his return, he began to pursue public office.
Matsikoudis, also a first-generation American, grew up in Jersey City, first on the West Side, and then in Greenville.
A lawyer, he began working in government in various capacities in the administration of Gov. James McGreevey, including as an assistant counsel to the governor and a senior deputy attorney general. He became corporation counsel for Jersey City in 2005 under Healy.

The devil is in the details

While both candidates agree that Jersey City has emerged as a vibrant city, they disagree on a number of policies. Each sees the other as advocating the wrong path for a successful future.
Fulop portrays Matsikoudis as a blast from the past, a repeat of failed policies under Healy. Matsikoudis claims Fulop’s policies have not benefitted most of residents of Jersey City, and must be reexamined and revamped if future successes are to benefit everybody.
Matsikoudis, who has been critical of Fulop’s claims of success, disputed Fulop’s statistics, saying Fulop didn’t create as much affordable housing as Fulop claimed.
While Fulop has touted his administration’s ability to shift redevelopment away from the waterfront, Matsikoudis claims Fulop has largely benefited developers.
Matsikoudis cited rising rents and recent homicides saying that the city’s policing policies need to change from “a warrior mentality to a guardian mentality.”
Fulop said under his administration, Jersey City has taken huge strides in public safety that include increasing the ethnic and racial diversity on the police force. He said under his watch development, which largely took place downtown and along the waterfront under previous administration, has moved to other parts of the city.
“Prior to 2013, development was occurring only in one part of the city, downtown, while the rest of the city was neglected,” Fulop said. “We had market rate in one part of town while all the affordable housing was dumped in another.”
Fulop said his administration embraced the concept of “mixed communities,” where market rate and affordable co-mingle. Recently, his administration had the city council enacted a 80 to 20 ratio, meaning that for every 100 units built, 20 of them had to be affordable, even downtown.
Matsikoudis said some of this development was in the works prior to Fulop, and that development in Journal Square was coming in “fits and starts.” He went on to say that development under Fulop came with a price to other residents, since much of it came as a result of tax abatements.
Matsikoudis said this meant that other taxpayers around the city had to subsidize these abated properties, and were saddled with the cost of schools.
Matsikoudis questioned the success of Fulop’s affordable housing development policy, noting that only 173 units had been constructed during Fulop’s first term.
Fulop disputed these figures, but went onto point out that some of the future affordable units are in the pipeline.

While Fulop suggested Matsikoudis was a key figure in Healy’s failed administration, Matsikoudis pointed out that a number of Fulop’s successes came about through initiatives started under Healy. Matsikoudis took credit for aggressive legal action against corporate polluters that led to the clean-up of large plots of contaminated land, one of which is the current site of Berry Lane Park.
But Matsikoudis said the city is failing in many of its nuts and bolts duties.
“We need to clean our streets better and initiate community policing,” he said, noting that a lot of people will get hurt by the revaluation which will impact taxes early next year, while many of the tax abated properties may be immune.
The Hudson Reporter’s video debate covers a wider range of subjects, including new development, the expense of living in Jersey City, gun violence, lost school aid, what it means to be a sanctuary city, support for the arts, and even how to get along with former political opponents once the election is over.
If you have a letter about the election, email editorial@hudsonreporter.com and put “Jersey City letter” in the subject head. Letters must be under 500 words and include contact information.