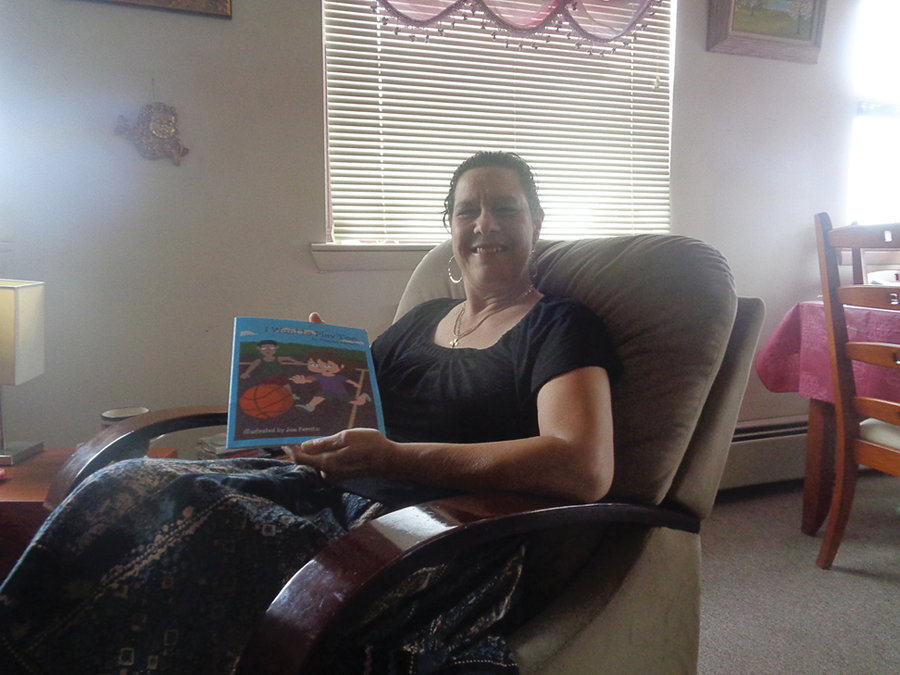 Weehawken author Theresa Borrelli, at home with “I Want to Play,” her latest book.
×

Weehawken author Theresa Borrelli, at home with “I Want to Play,” her latest book.

In a world where girls may not feel as entitled to play sports as boys are, Weehawken author Theresa Borrelli sees a need to empower young woman to participate. Her latest book, “I Want To Play, Too” was released in July. For ages 5-7, the book stars Angela, a sport-loving girl who plays basketball every single day.
But one day, when Angela arrives at the courts, she finds the regular girls and boys she plays with absent. In their place are four boys who don’t think girls should shoot hoops.
She comes up with a solution – which Borrelli says you’ll have to buy the book to discover – that resolves everything.
“I wanted to write something about a girl in a different situation, where they’re not used to seeing girls on basketball courts,” said the author, who lives in Weehawken and has lived in North Bergen, West New York, and Jersey City.
“Here she comes. She plays all the time with other girls and boys. She’s well known in the neighborhood. And I wanted to put it towards a bullying situation.”
The book is dedicated to former Hoboken councilwoman Beth Mason and her civic league, which sponsored publication
Xlibris.com is publishing the book, which Mason paid them to do, Borrelli said.
Though she was an avid athlete in her younger years, and also an unfortunate victim of bullying, Borrelli said the reasons behind penning the book aren’t autobiographical.

“Even though girls are excelling more and more in sports now, they’re starting out much older here in Hudson County,” she added. Borrelli said she doesn’t see that many sports leagues in Hudson County for young girls today.
In the 1970s in West New York, she was in a girls’ basketball league. “Now I’m not finding anything here for girls very young, unless they’re mixed [boys and girls],” Borrelli said. “[Elsewhere] girls are playing basketball, softball, tennis, anything. I wanted to show something where the girl is challenged by something, so that she comes out with an idea to escape the bullying.”
Borrelli said she began writing the book in 2015 and finished this year.
“People say, ‘Oh, I can write a children’s book.’ No, it’s actually the hardest type of book to write,” she said.
“That’s because of the language you have to use. You have to know what age group and what grade level you want to gear it at. If it’s for a 6-year-old, you can’t use simple, tiny words, because they’re in the growing process and they’re learning, so you have to challenge them.”
Borrelli, who frequently speaks out against bullying in local schools, said she wants her book to simply “teach tolerance between genders.”

Borrelli has spoken about bullying at local schools. On Sept. 8. she is set to hold a talk on bullying at Hudson County Community College in Union City.
You can purchase “I Want to Play” at Xlibris.com, Barnes n Noble, and Amazon.com.
For more information on Borrelli, email her at tb49borrelli@gmail.com. You can also contact her at 201-590-9094, or visit her website at https://sites.google.com/site/theresaborrelliofficial/.