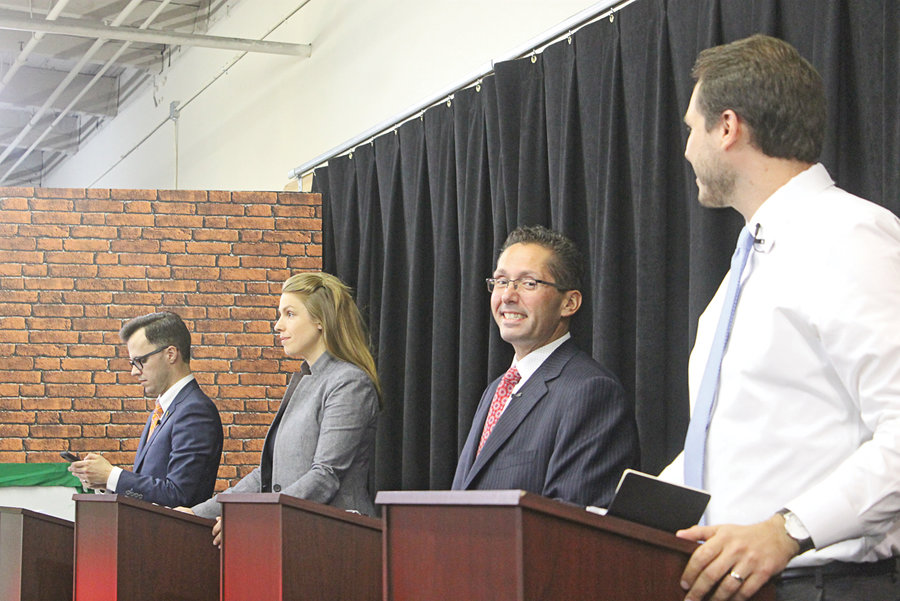 The 2017 Ward E council election race heated up tlast week when outgoing council member Candice Osborne officially announced her support for Rebecca Symes to succeed her representing downtown Jersey City.
In making the endorsement, Osborne cited Symes’s experience in government and in the private sector advocating for progressive causes and her vision for making Jersey City a national model of government innovation.
“To replace me on the city council I want someone who will work hard, who will be pragmatic and who understands downtown Jersey City,” said Councilwoman Osborne in an email sent to supporters. “While I am certain many of the candidates possessed two of the three characteristics that most mattered to me in this election, I feel that only one person successfully demonstrated all three of them to me – Rebecca Symes.”
Osborne won an overwhelming victory in the Ward E race in 2013, becoming the only ward council candidate to win on the first ballot and avoid a runoff.
During her time on the council, Osborne is credited with sponsoring more pieces of legislation that were signed into law than any other council member and claims to have been a strong advocate for responsible development, pedestrian safety and utilizing technology to improve city government.
She announced earlier this year that she would not seek reelection.
“It is such an honor to be endorsed by someone like Candice Osborne, who has been a devoted public servant and an excellent representative for Downtown Jersey City,” said Symes. “Whoever succeeds Candice has tremendous shoes to fill, because she has always brought so much to the table as an elected official. I am proud that she has recognized that I am the right choice to continue her legacy and so excited to have her support as we move closer to Election Day,” Symes said.
The endorsement comes despite opposition from former Osborne supporters, who have argued for her to support Nicholas Grillo in the five candidate race in Ward E.
The Osborne endorsement sets the stage for a serious political conflict, since the Hudson County Democratic Organization is expected to throw its support behind Grillo. The announcement is expected within a few days.
The Ward E seat is important for a number of reasons. The ward includes some of the most historic parts of the city as well as a large part of the arts community, the whole of the financial district, and the resurrected waterfront. More importantly, it was the ward Mayor Steven Fulop represented when he served on the city council. When Fulop became mayor, Osborne successfully took his place and espoused a similar political philosophy.
Fulop is currently in a head to head battle against Bill Matsikoudis for mayor, and Ward E has always turned out to support him. Although Jake Hudnut is running on the Matsikoudis ticket in Ward E, Fulop has yet to endorse any of the five candidates, creating a kind of vacuum that could work against him in his reelection bid.

Originally, seven candidates indicated they would seek the seat. Two of them withdrew. The most prominent of these was Michael “Billy” Bisogno, who recently was named executive director of the Hudson Pride Connection. The appointment made him suspend his campaign for council.
But what came as a real surprise was Bisogno’s endorsement of Grillo, although apparently the endorsement came because of Grillo’s position on responsible development.
Jake Hudnut, who is running on the Matsikoudis ticket and is the only openly gay candidate, could well inherit some of the voters Bisogno might have brought to the race.
Madeleine Cag, James Solomon, and attorney Rebecca Symes are also formidable challengers in Ward E.
Prior to the Obsorne endorsement, Symes came with strong support from a number of key people and organizations. She recently received the endorsement of the Hudson County Central Labor Council (CLC), a division of the AFL-CIO, a powerful voice in Hudson County.
“I would like to thank the Central Labor Council for their endorsement, and for offering their guidance on how to best partner with their members to improve the lives of working families, fight for economic justice in our workplaces, and social justice in our city,” said Symes in a statement issued a few weeks ago. “I pledge to support the use of union labor and stand up for the right of workers to make a free choice to form a union and bargain collectively – in an environment free of interference, coercion, harassment, reprisals or delay.”
She has also received support from a number of people involved in downtown neighborhood associations.

Who are these people?

Symes while in college once served as an intern for U.S. Sen. Ted Kennedy, later became an attorney focusing partly on civil rights, and took up work for non-profits that helped low income residents in New York City. She later worked for U.S. Sen. Kirsten Gillibrand as the director of Constituent Affairs.
Grillo was raised near Holy Rosary Church, Hamilton Park and the Village Sections of downtown. In 1999, he was named Chairperson of Holy Rosary Church’s Annual Italian Street Festival, today is known as La Festa Italiana. He studied music and liturgical studies in college, and later worked as organist and music director for various Catholic churches. He currently works as a licensed funeral director in Jersey City. He holds prominent positions in many local and regional civic associations.
Solomon has previously served as an aide to the mayor of Boston, and designed performance management systems for the city of Newark. He has a BA from Pomona College and a Masters in Public Policy from Harvard University’s Kennedy School of Government. His campaign centers on his being “independent” from various political groups.
Hudnut recently served as a Jersey City public defender and maintained a criminal defense law firm in Jersey City for six years, advocating for the accused and protecting their constitutional rights. He is currently an attorney at Spar & Bernstein, P.C., a law firm dedicated to fighting on behalf of immigrants and non-citizens.
Giansanti Cag is a diversity and tolerance activist. She has a BFA in painting, a masters degree from Rutgers’ Division of Global Affairs and a Law degree from Rutgers as well. She is a founding members of a global research database of women’s rights laws (IMPOWR.org). She serves on the board of Nimbus Dance Works.