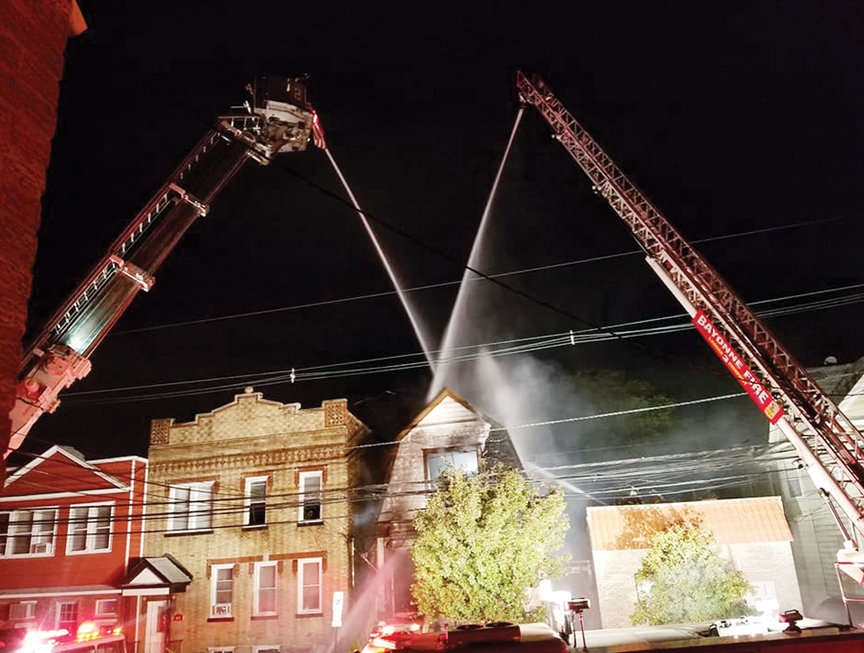 Fire on Avenue B

A three-alarm fire tore through the first floor of an Avenue B home at around 10 p.m. on Nov. 2, displacing one person and evacuating eight residents next door, according to Bayonne Fire Chief Keith Weaver. Firefighters arriving on the scene found smoke billowing from the first floor. Firefighters used multiple hoses and two master streams from ladder trucks. “The fire progressed to a third alarm due to the fire conditions and a large amount of accumulated material in the building,” said Weaver in a media statement. “The accumulated material in the building hampered and slowed the progress of firefighting operations.”
The fire was placed under control at 1:30 a.m. Fire companies remained on the scene overnight and into the following day to monitor and extinguish hot spots. The building suffered heavy structural damage and is planned for demolition.
The occupant of the building suffered a minor injury and was treated at the scene by EMS. No other injuries were reported. The cause of the fire is under investigation.

The 349-ton barge that ran aground on Bayonne’s western shore between 16th Street Park and 21st Street was finally removed on the morning of Thursday, November 2, after two failed attempts earlier in the week.
The barge appeared on the shore Monday, October 30,after a rainstorm that enveloped much of NJ broke it free of its mooring in Newark Bay.
The barge, owned by the Staten Island-based Great Lakes Dredge and Dock Corporation, is used to store and transport dredged sentiment from the bay bed. From 16th Street Park, residents can spot the barges moored when not in use. They’re tugged behind large dredging ships when in the process of maintenance dredging. Dredging companies are contracted to perform routine dredging to maintain proper shipping channels.

A Bayonne man admitted to robbing Bayonne Community Bank in Jersey City on May 25, 2016, according to a statement from acting U.S. Attorney William E. Fitzpatrick.
Patrick O’Boyle, 60, pleaded guilty before U.S. District Judge Susan D. Wigenton in Newark federal court to an indictment charging him with one count of bank robbery.
According to documents filed in this case and statements made in court, O’Boyle allegedly robbed the Bayonne Community Bank by approaching the teller and demanding all “your 100s, 50s, and 20s and make it quick because my car is double parked outside.”
O’Boyle allegedly had his left arm clutched at his side as if he had something under his hooded sweatshirt, which the teller thought might have been a gun. The teller handed him cash, and O’Boyle fled the bank.
The bank robbery charge carries a maximum penalty of 20 years in prison and a $250,000 fine, or twice the gross gain or loss from the offense. Sentencing is scheduled for Feb. 20, 2018.
Acting U.S. Attorney Fitzpatrick credited special agents of the FBI, under the direction of Special Agent in Charge Timothy Gallagher in Newark, and officers of the Jersey City Police Department, under the direction of Director James Shea, with the investigation leading to the charges.
The government is represented by Assistant U.S. Attorney Ari B. Fontecchio of the U.S. Attorney’s Office Criminal Division in Newark.

Congressman Albio Sires, who represents the 8th District, which includes parts of Bayonne and much of Hudson County, responded to the House of Representatives passing a Republican-led revision of the federal tax code. The bill is now in the U.S. Senate. Representative Sires said in a statement:
“As I’ve said before, this Republican tax plan prioritizes the wealthy and corporations over working American families while adding $1.5 trillion to our national deficit over the next decade. Tax reform should be a bipartisan effort to simplify the tax code in a way that is fair and stimulating for the economy, not a one-sided plan crafted behind closed doors.
The Tax Cuts and Jobs Act eliminates numerous deductions that millions of middle class families use every year to pay for cuts in the corporate tax rate, massive tax breaks for the wealthy and the delayed repeal of the estate tax. Particularly devastating for New Jersey is the partial repeal of the state and local tax deduction which has been part of the tax code for over 100 years and is used by many New Jersey families. The local property tax would be capped at $10,000 and the deduction of state incomes would be eliminated. On top of this, mortgage interest deductions for new homebuyers would be cut in half, capping the deductible interest to the first $500,000 worth of home loans.
The bill also does away with a standard deduction for the elderly as well as deductions for student-loan interest, medical expenses, and property losses. These eliminations heartlessly target those who are most in need of tax relief and are particularly cruel in the wake of the numerous natural disasters we have experienced this year that have left millions with property damage and unexpected medical bills.”

Six local veterans were honored for their military service in Bayonne High School’s annual “Field of Heroes” ceremony.
John Baccarella of the Army, Alfred E. Bell of the Army, Barry J. Dugan of the Marine Corps, Donald Miller of the Army, and family members for the late Donald J. Cruden of the Marine Corps and Frank Polera of the Marine Corps received awards.
Every year, the Bayonne School District raises money through the sale of American flags. Those who purchased flags can put the name of a veteran or other uniformed personnel on a dedication list displayed at the ceremony.
Bayonne’s VFW Post 226 Veterans Museum was presented a $5,000 check. Local Bayonne officials looked on as a flag-raising ceremony concluded the program on the front lawn of the school, where a thousand flags were planted.

Members of Bayonne’s Boy Scout Troops and Cub Scout Packs will spread throughout the city to collect food donations from the community on Saturday, Nov. 11, from9:30 a.m. to 12:30 p.m. All donations will be used at local Bayonne food pantries.
The annual food drive is planned to help fill up the local food pantries for the holidays. Each year, the Bayonne Scouts collect thousands of food items.
Residents who wish to support the food drive are asked to leave their nonperishable food donations in a bag on their doorstep by 9 a.m. on Saturday, Nov. 11. Items needed include canned goods, pasta, cereals, soups, mac and cheese, and canned meats like spam (do not include glass packed items). All donations must be visible from the street; otherwise they will not be picked up. Scouts are not permitted to enter into anyone’s homes.
The Bayonne Boy Scouts are sponsored by Blessed Miriam Theresa R.C. Parish, St. John Paul II R.C. Parish, Trinity Episcopal Parish, and St. Vincent DePaul R.C. Parish.
For more information or to join a Pack, Crew or Troop, visit www.beascout.org or contact Troop 20 and Pack 20 at Blessed Miriam Theresa R.C. Parish, Larry Butto, at (90) 227-9722; Troop 19 at St. John Paul II R.S. Parish, Robert Archibald, at (201) 988-4379; Troop 27 at Trinity Episcopal Parish, Bob Hickey, at (201) 888-2801; Troop 25 at St. Vincent de Paul R.C. Church, Jan Patrick Egan (20) -988-4786.
Residents whose donations are not picked up by 1 p.m. can call (201) 290-9948 to arrange for a special pick up. For more information, call Steve Gallo at (201) 290-9948.

After an eight-week trial, jurors began deliberating Monday about whether NJ Sen. Bob Menendez, a Democrat, was guilty of bribery when he accepted gifts from a wealthy doctor, Salomon Melgen. In a three-hour summation, Menendez’s lawyer contended that the two men are friends and that any gifts from Melgen to Menendez were given with no strings attached.

More than two dozen local businesses in Bayonne were thanked for their participation in the Bayonne Chamber of Commerce’s annual “Give Thanks” food drive during an event held at the Da Vinci Room on Thursday, Nov. 2.
The Hudson Reporter newspaper group was one of the businesses which housed a collection container for the drop-off of non-perishable food items to be distributed to 12 food pantries across the city.
The drive was lead this year by CarePoint Health-Bayonne Medical Center and BMC Chief Operating Officer Catherine Shull Fernald. Chamber President Matt Dorans, Mayor James Davis and Councilmen Sal Gullace, Gary La Pelusa and Juan Perez attended the event.
Fernald said that the food drive is not over. Residents can still donate to it until Nov. 16 on its Go Fund Me page at https://www.gofundme.com/z4c4d-give-thanks-food-drive .