Welcome to the Hip Hop Tunnel 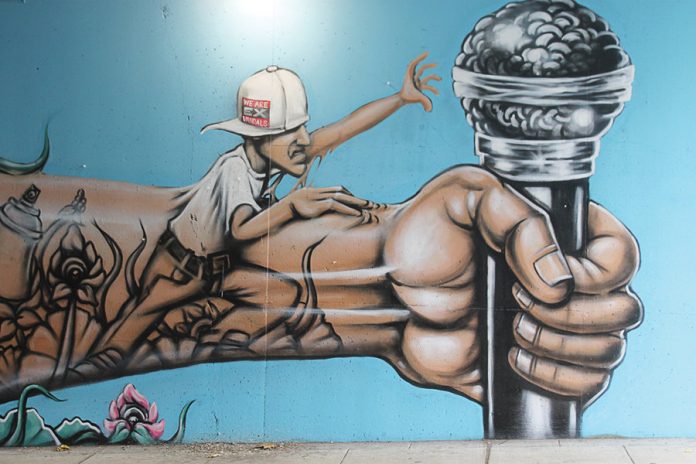 For two weeks from dawn to dusk, William C. Richardson Jr. worked diligently to create the city’s latest mural. Richardson’s canvas is a 150-foot tunnel along Ravine Road (also called New York Avenue) that connects Jersey City Heights along a steep decline with Hoboken at the bottom.
Thousands of people use this short cut daily to reach other parts of Jersey City or the Hoboken train terminal, and many people will be probably surprised by the sudden burst of color and image along the previously dismal walls.
Brooke Hansson, who directs both the anti-graffiti and anti-litter program for the city, said when the city’s public arts committee authorized the project earlier this year, the Ravine Road tunnel has been frequently tagged by illegal graffiti and is largely a mess.
“We’ll power wash the walls, and then start on the mural project,” she said at the time.
Although his work is not as high profile as many of the more recent projects, such as the 10-story high image of rock star David Bowie on the Cast Iron Lofts building on Jersey Avenue,
its location is an area that was previously known for less artful graffiti.
“I used roughly 390 cans of spray paint, which allows for a much faster process,” said Richardson. He designed and painted the mural that covers both walls of the tunnel interior.
The project is not quite complete, he said, and he will add additional elements to the top interior of the bridge later this winter.
“The tunnel is actually owned by the county, and JCMAP [Jersey City Mural Arts Program] was able to partner with them in order to execute the project,” Richardson said. “We worked with Wally Wolf in the county, who had their electricians increase the lights inside the tunnel from 30 watts to 130 watts, transforming a dark, dingy, frequently littered and vandalized tunnel into a whole new world that is a delight to pass through.”
Richardson, who works under the name Will Power, is a self-taught contemporary artist.
“I’ve honed my art skills on the streets of NYC, Queens, Brooklyn and Jersey City. My art stems from a strong influence of graffiti and the Hip Hop culture, but I also have a passion for the art of the great Renaissance Masters which is frequently reflected in my work,” he said.
The tunnel project, titled “Hip Hop Tunnel,” reflects the side of hip hop that represents creativity, evolution, and a journey that is uplifting and heartwarming. Hip hop has sadly garnered a bad reputation, due to the influence and language of rap music, images promoting violence.
“But Hip Hop in its essence is empowering, moving and energetic, and gave birth to a cultural movement that’s altered inner city generational thinking from race and politics to art and language,” Richardson said. “The various stages of the mural represent the true elements of hip hop distilled into a beautiful landscape. The bridge itself represents a journey: it begins from one end, and goes to the other, allowing people who cross it to view their journey as a whole through the chapters of Hip Hop.”
He said the public response over the course of the three weeks it took to complete the tunnel was overwhelming. Dozens of pedestrians and drivers stopped to express their excitement about the project and the marked improvement it has made to their daily commutes.

Led by a team

Initiated in 2013 and funded by a Clean Communities Grant, the Jersey City Mural Arts Program links established and emerging local, national and international mural artists with property owners city-wide as part of a program that reduces graffiti, engages local residents, and is transforming Jersey City into an outdoor art gallery. From the Heights, to Greenville, to Downtown, to the West Side, to Bergen Lafayette and Journal Square, Jersey City’s cultural scene continues to expand and diversify.
According to Hansson, the mural program is led by a team of managers, artists, and administrators in the mayor’s office, the Department of Cultural Affairs and the Department of Public Works, who work directly with neighborhood groups, educational institutions, small businesses, and private property owners to select ideal locations, recommend artists, and help to determine the theme and content of the murals commissioned.
The projects are now also reviewed by the arts council, which works with private property owners such as St. Peter’s University to develop projects.
Primarily launched as an anti-graffiti initiative, the program has since grown as an apparatus to engage community groups, educational institutions, partner with larger entities that own land in Jersey City, such as Conrail and the Turnpike Authority, and to help reactivate and beautify former dead-zones and vacant lots, city officials said.
When announced by the Christie Administration in 2012, the program’s guidelines, while mostly describing how the money can be spent for anti-litter enforcement, do allow “the painting of murals as a way to prevent graffiti.”
Some of the individual murals cost as much as $4,000 to complete.
Every year, a portion of the grant is allocated to cover paint supplies and small art stipends for artists depending on the size of the wall and the time to complete the project.
Most the artists reach out to this team with their portfolio and mural proposals, according to city officials, or they are sometimes recommended by residents or business owners.
Artists who have participated in the Jersey City Mural Arts Program include Zed1 and Pixel Pancho from Italy, Fintan McGee from Australia, and Faith47 from South Africa, who completed her second and largest mural for the city this spring. Others were executed by DaveL from Miami and New York’s Queen Andrea. Dasic from Chile is schedule to complete a large-scale mural within the next few weeks, as is Argentinean based artist Kremenart.
Mayor Fulop is a strong supporter of the mural program.
“We couldn’t be prouder that Jersey City is taking its place in the global art arena and that this project is helping to elevate our local artists on an international scale,” Fulop said in an interview last year.